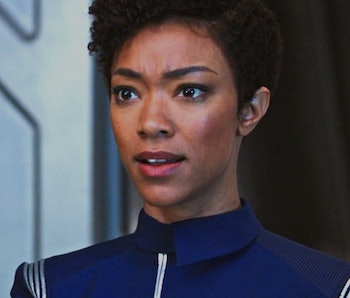 All the changes to the world of Star Trek on the new show, Discovery, will eventually be explained. One executive producer of Discovery — Alex Kurtzman — has gone on record about the existence of seemingly large inconsistencies in the new dark and gritty Trek.

“We are canon,” Kurtzman said during New York Comic Con on October 8. “You’ll have to be patient with us.” He suggested that, eventually, Discovery will reconcile certain differences between the year 2255 of Lorca and Burnham and 2264 of Kirk and Spock. Apparently, quite a lot can happen in just 10 years.

In fairness, the canon reconciliation probably has more to do with thematic events happening within Starfleet and less to do with what kind of funky fabric the Starfleet uniforms are made out of. For many smart fans, there’s a difference between aesthetic and thematic continuity. Still, considering how brutal and rude certain Discovery characters have acted — like Lorca — some longtime fans are having a hard time thinking of this Starfleet as the same benevolent organization we know from the era of Enterprise and the original series.

What Kurtzman seems to be saying is simple: None of this is a mistake. In fact, the show will eventually address why Starfleet seems so different in this decade than it does in the one that follows. So far, just four episodes in and Discovery has already demonstrated its ability to dole out more than a few unexpected twists. And if Trekkies give Kurtzman’s latest comments just a little bit of credence, then it stands to reason none of this is being done by accident.

The title of Discovery obviously references the starship of the same name which is warping around the galaxy every week. However, this word might have a different meaning altogether. Back when Discovery was first announced, many claimed — including Nicholas Meyer — that Star Trek VI: The Undiscovered Country — was a “touchstone” for the new series. In that film, The Undiscovered Country referred to a more peaceful, but unknown, future. Perhaps the “discovery” of Discovery is figuring out how Starfleet becomes that purer, altruistic organization dressed in brightly colored spandex.

If you liked this article, check out this video on why the Klingons look so different on Star Trek: Discovery.