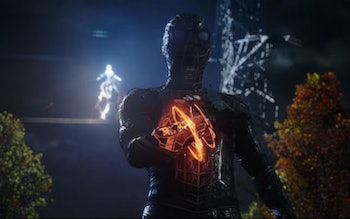 The new Spider-Man: No Way Home trailer didn’t reveal a few heavily rumored characters, but it did reveal one new one. Or did it? The 2nd trailer from Marvel and Sony’s Spider-Man sequel clearly features what looks like Spider-Man in a black and gold suit.

But who does that suit belong to? Who’s wearing it? And most importantly, who made it? The biggest mystery in the new Spider-Man: No Way Home trailer has a surprising answer — if you believe one recent leak.

Warning! Possible spoilers ahead for No Way Home.

We’ve known about Spider-Man’s black and gold suit for a while thanks to various toy leaks, but those types of leaks aren’t always right. (Toy companies often make up their own riffs on movie characters without any inside info from the studios.) But in this case, it turned out to be true.

So what’s the deal with this new Spider-Man suit? That leaked too, though whether it’s accurate is up for debate. However, according to one report, the black suit is actually just Tom Holland’s regular suit inside out. (Apparently, he’s forced to wear it like that after someone throws paint on the suit and it won’t come off.)

Yup, that’s right. Covered in paint. Inside out.

Normally, we wouldn’t believe anything that ridiculous, but considering that this rumor predates the new Spider-Man: No Way Home trailer by two weeks, it’s definitely worth considering. And if we’re being totally honest about it, this actually feels like the kind of deception Marvel loves.

A closer look at the suit also seems to back up those claims. All these weird symbols and lines could easily be the internal wiring. Possibly with a few magical Doctor Strange alterations.

But if that’s a bit dissapointing, take solace in the fact that the rest of the Spider-Man: No Way Home trailer has some very fun details, even if it’s also pretty hard to follow.

And we’re always happy for a closer look at Green Goblin. (Why’d they make him so small in the poster?)

Finally, the fight scene between Tom Holland’s Spider-Man and Alfred Molina’s Doc Ock looks like a lot of fun. (But we didn’t love that joke about the supervillain’s silly name. Let comic book characters be weird!)

Spider-Man: No Way Home swings into theaters on December 17.