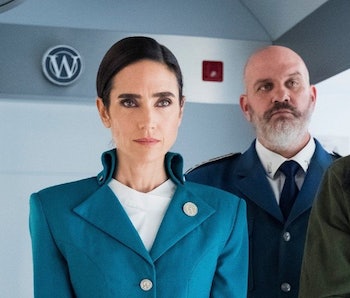 This article about Season 2 of Snowpiercer was originally published on July 14, 2020 and updated on December 5, 2021 following the release of the season on TNT. Read on for the original article, with some new changes to reflect the latest updates on this topic.

After a long wait made longer by coronavirus, it’s finally time to get back on the train. The world of Snowpiercer might be dystopian, but by 2020 standards, it looks downright delightful, so we were pretty thrilled to see the show get a Season 2, and beyond!

Snowpiercer was adapted from the 1982 French graphic novel Le Transperceneige as well as Bong Joon-ho’s 2013 film. The series was renewed for Season 2 before a single episode of Season 1 aired. With Layton leading a successful revolution and the discovery that there is a second train, Snowpiercer’s second season was all the rifer with post-apocalyptic machinations.

Here’s everything to know about Season 2, including the release date, plot, cast, and trailer for the tantalizing TNT series.

When was the release date of Snowpiercer Season 2?

Season 2 of Snowpiercer arrived on January 25, 2021. The release date announcement was made at the show’s panel during New York Comic-Con 2020.

How many episodes were in Snowpiercer Season 2?

What is the plot of Snowpiercer Season 2?

Season 2 picked up where Season 1 left off. Following a successful revolution, which saw Layton and the Tailies infiltrate the front of the train, Melanie transfers control of Snowpiercer to Layton, who hopes to set up a democratic way of governing the remaining passengers. Speaking with The Hollywood Reporter, showrunner Graeme Manson explained how this new setup would impact Melanie and Layton in Season 2.

“The real, real challenge for Layton is to reconcile the revolutionary with what he may have to be as a politician. And then there is an equal struggle for Melanie, which is her desire to step down, to be an engineer, to go back to the science of survival without the politics. And then who is on the horizon, but it could be the great Mr. Wolford to throw all of that into disarray. So already this nascent democracy is under threat.”

That’s right. Mr. Wilford, whose presence in Season 1 was nothing more than a myth buoyed by Melanie, was a part of Season 2. The Season 1 finale saw Snowpiercer pass through Chicago when they were stopped and boarded by a mysterious supply train called Big Alice.

"As an actor I’m really jealous of the Big Alice crew in some ways. They’re like, so wild! Those characters are like, it is a different world so when we’ve been living in Snowpiercer for a year and then you come up against Big Alice it feels like an alternate dimension, kind of? The way they dress is slightly different and, it was kind of like you go to a new school and there’s all the cool kids? You’re like ‘Oh man, I don’t know, I’ll never be cool like them.’"

"That’s one of the things we love to do on the show, and that really comes from director Bong [Joon Ho]’s energy. How you could open a door and constantly find some amazing set. We love to do that every year and Wilford’s train really gave us that opportunity. But Big Alice is a prototype so it’s not all First Class back there. They have a different society. Wilford has created something else."

Who is in the cast of Snowpiercer Season 2?

Daveed Diggs and Jennifer Connelly are back as Layton and Melanie in Season 2, respectively. Below is the remainder of the cast whose characters didn’t die in Season 1 and returned for another trip around the world.

Is there a trailer for Snowpiercer Season 2?

Yes, there is! Following the Season 1 finale, TNT dropped a 30-second promo teaser for Season 2, revealing Sean Bean as Mr. Wilford. He wants to take back the Snowpiercer, and it’s rather chilling. Watch it below!

And at NYCC 2020, we got a second trailer teasing the showdown between Wilford and Layton.

Is Snowpiercer renewed for Season 3?

Yes. Speaking with Inverse, Basso confirmed Snowpiercer Season 3 was a go. It will premiere in January 2022. Not only that, but the series was renewed for a fourth season as Season 3 was wrapping production. So there’s plenty Snowpiercer to come!

Snowpiercer Seasons 1 and 2 are available on-demand on TNT.

This article was originally published on July 14, 2020