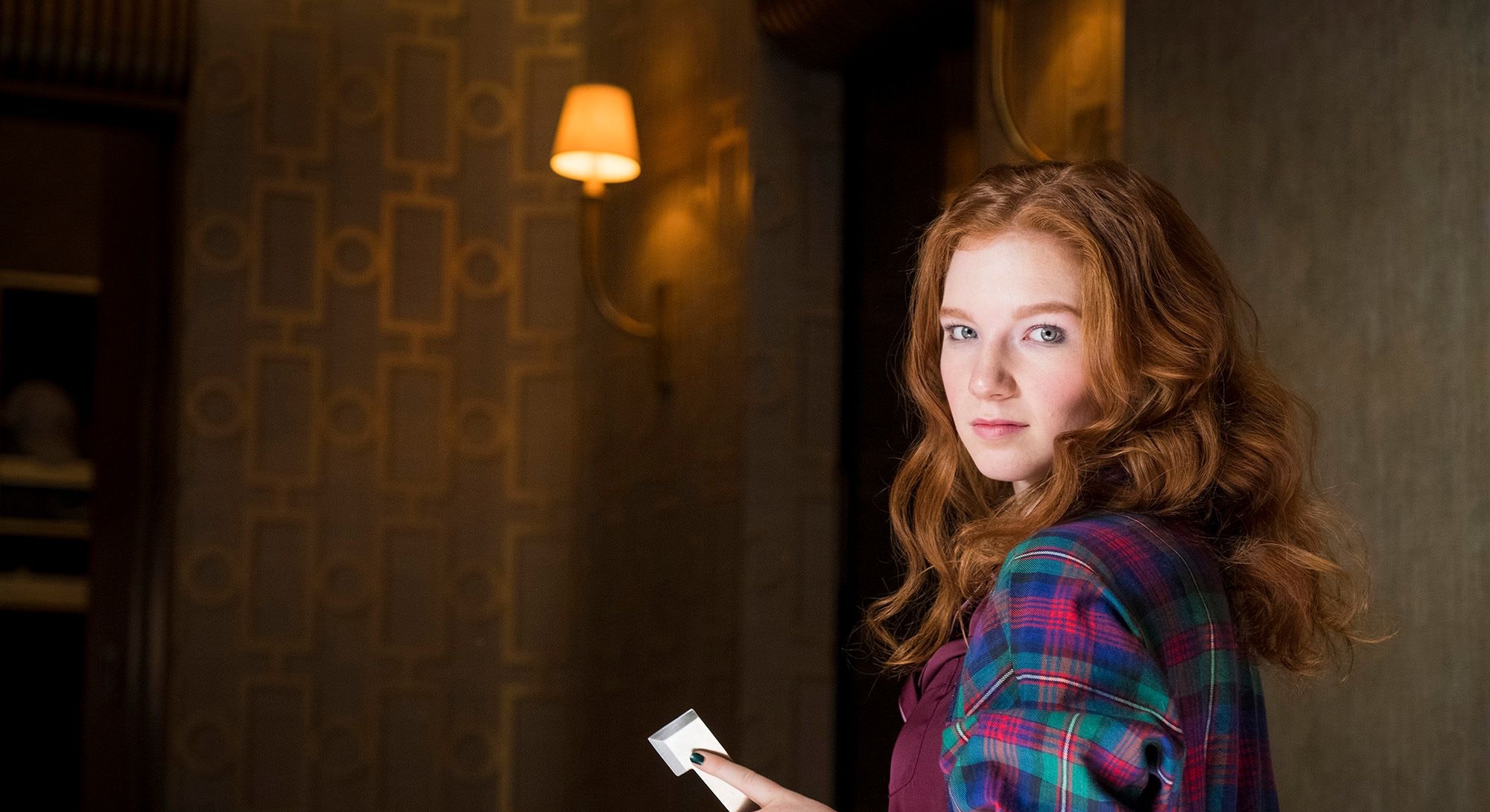 After years of delays, Snowpiercer is finally chugging along quite nicely.

The TNT series draws inspiration from Bong Joon-ho’s 2013 film and the original French comic while laying its own track for this post-apocalyptic story set on an eternally running train. One way the series from Orphan Black showrunner Graeme Manson is setting itself apart? By serving up one of the grossest and most disturbing moments ever seen in any Snowpiercer story.

If you're watching Snowpiercer, you probably already know the scene we're talking about. It's one that comes late in the season as LJ Folger, a teenaged first-class resident played by Annalise Basso, faces accusations of murder onboard the train. In a private and stressful moment with her parents, LJ asks her father to hand over his false eye (the result of a wound she inflicted) and then pops it into her mouth like a sucking candy.

"I kind of looked at that eye ritual as her little reminder that at least she has control over this," Basso tells Inverse. "When she stabbed out her father's eye, now she has this part of him literally in her mouth."

In an interview, Basso dives deeper into her motivations in that scene, discusses the challenges of playing a complex villain like LJ, and teases what's next for her character as Snowpiercer Season 1 comes to an end.

LJ is a twisted character who puts on an innocent show for her parents. What's it been like for you playing two sides of this character?

Honestly, there are more than just two sides to her! She has to make everyone believe the person they're seeing is the real LJ. I really enjoyed jumping around to all the different characters, playing all the characters that she plays.

“The character that comes most naturally is the innocent version.”

The character that comes most naturally is the innocent version. I find the whole black swan persona really challenging to play and this is the first time that I've really had that opportunity. Her confidence and how manipulative she is and how dark she is — it's so easy to get absorbed by a character like that. It was a lot of fun playing with the boundaries of where she begins and I end.

The scene in Folgers’ quarters between LJ and Layton left a lot unspoken about the murders. Were there any challenges in filming it?

It was hard for me because being that intimate with somebody on-camera is a little bit awkward. I made a conscious effort to just fully embrace LJ in that moment. She wouldn't be afraid, she would be coy or hesitant. She was trying to manipulate Layton to her advantage and use him somehow. She wants control. That's the one thing that LJ lusts after, and power as well.

The scene with Layton is her figuring out how far she can go, thinking she has the upper hand and another person under her thumb now that Eric's dead. She wanted him on her side so bad, and when [Layton] turns her in, she just can't deal with it and breaks. She can't stand when things don't go her way.

Could you tell me more about the scene with LJ and her father's eye? Do you feel like that was the moment where LJ was solidified as a character for you?

I kind of looked at that eye ritual as her little reminder that at least she has control over this. When she stabbed out her father's eye, now she has this part of him literally in her mouth. She's in control of the situation.

“A lot of people were totally disturbed by it, which is great!”

So, it's just a little psychotic ritual that Graeme [Manson, Snowpiercer showrunner] thought would make the audience cringe. From what I'm reading online, it sounds like a lot of people were totally disturbed by it, which is great!

LJ's parents know what she's capable of, but they've also protected her this whole time. How might that relationship evolve after the trial?

There's that one line that her mom says to Melanie, "You're messing with my bloodline." Snowpiercer just reduces human relationships to wanting your family line to survive. Although her parents protect her, part of them that also fears her.

Maybe her mother is using that to her advantage on the train. Her mom is obsessed with power — that's probably where LJ gets it from. Her mom is an enabler too, willing to do anything to help her bloodline survive. LJ’s dad just follows along. It's really not about whether or not it's a functioning relationship, but whether LJ can continue the lineage.

There's a lot of tension between LJ and Melanie right now. Where do you see that going?

LJ is the antithesis of Melanie, what Melanie would be if she had no self-control. Melanie is grateful that she can contribute to the train, but LJ doesn't have anything she can contribute. She just has a world that she wants to control. And she doesn't really even have agency over herself. With the whole power dynamic on the train, LJ wants control, but she also loves chaos. So it'll just be her switching back and forth between those two things for the next couple of episodes.

What was going through LJ's mind in that moment where she's playing with butter in the dining car, as everyone could die?

LJ is a nihilist. She doesn't really care about anyone or anything else but herself. In a way, she's hoping that everything does end because life on Snowpiercer, you're being held captive. Although Snowpiercer protects you from the outside, you're being held in captivity, so she's wanting it to end.

She's not a person who really thinks about the consequences of anything. There isn't an escape from Snowpiercer, other than death. So she's just kind of sitting there hoping that maybe this is how she gets out of this world that she's been put into.

Do you have any theories as to how the show's events might line up with the movie, if at all?

There is a whole rebellion from the tail to the engine. I won't tell you how that pans out, but there's just a continuous struggle for power between everybody on the train. That's really the most obvious similarity — people are struggling and will do anything it takes to gain some control over their lives, over other people's lives, if it means that a select group can survive or maintain control.

Now that Eric is dead, what will LJ do differently?

I think the human part of her really loved Eric. His death kind of took away the smallest little sliver of humanity left in her. Now she really has no one, and she knows that. She can't really relate to her parents. She's not really close with them, although they protect her. They don't really trust her or love her. So she's really alone. Her loneliness is also in that moment where she's flicking the butter off the table.

There's no one else her age in first class, no one else on the train she can relate to. That's part of why she wanted to get so close to Layton. In the next couple of episodes, she's gonna lose some other people who are really close to her and she just totally falls apart.

Is there anything that you've learned from playing LJ and getting under her skin?

The most significant thing that I've learned so far is to be totally confident in yourself. Just be unapologetically who you are. I struggled with totally embracing who I am, and LJ struggled to find her place on the train. I'm struggling to find who I am in this industry. Also, when you're faced with a situation that seems like the whole world is over, it's so easy to give in to that darkness, that sadness, that loneliness. But you can't do that. Otherwise, you end up like LJ.