'Snowpiercer' star Steven Ogg on morality, Season 2, and that 'GTA 6' rumor he started

"I tend to play these characters that are morally ambiguous." 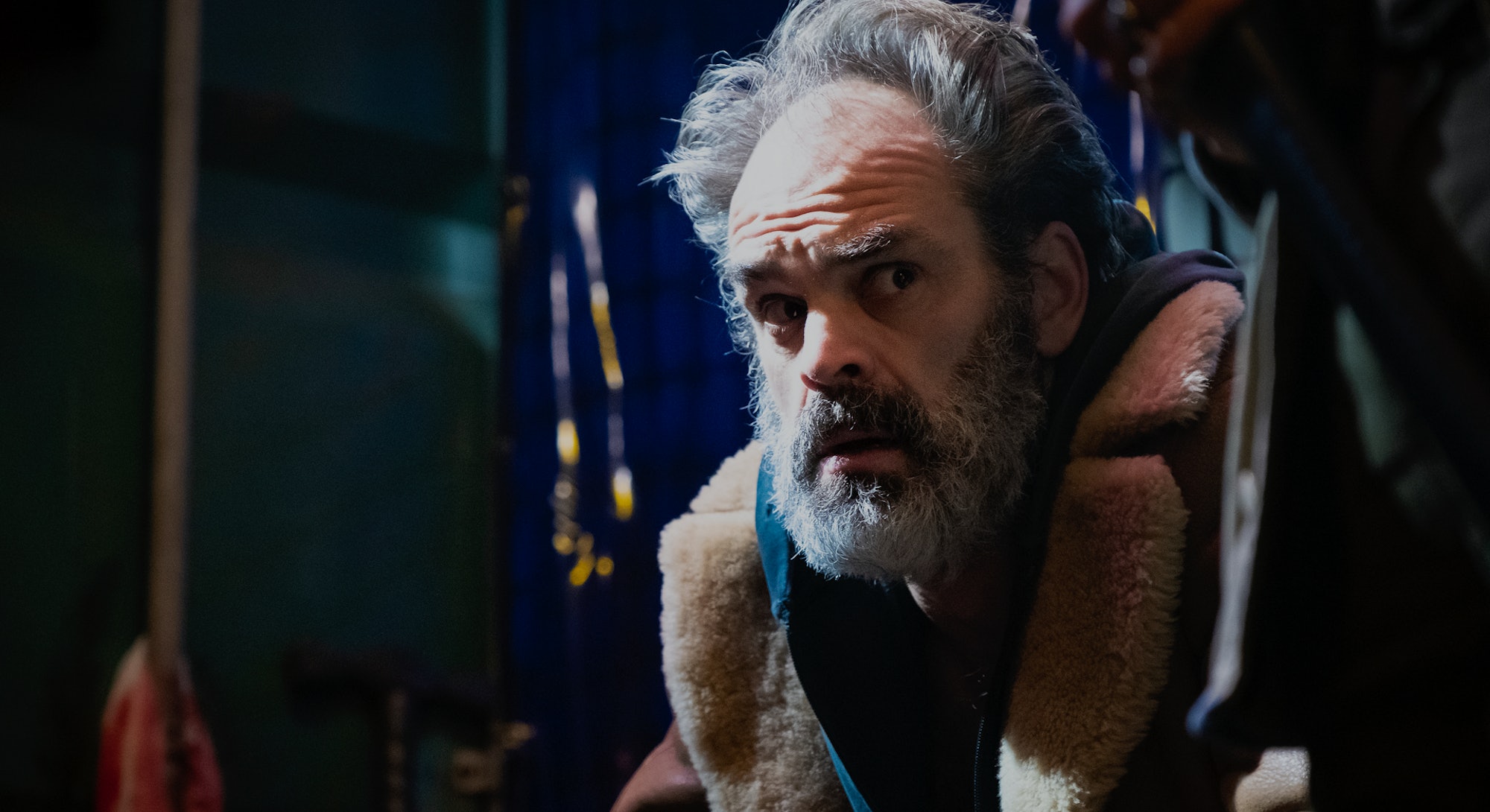 Steven Ogg is getting mad.

The Canadian actor best known for morally ambiguous and sometimes unhinged roles in The Walking Dead, Grand Theft Auto V, and now Snowpiercer just got back to Los Angeles. He's standing outside his home while we speak on the phone ahead of his new show's premiere when a masked jogger passes by.

"Why do people run with a mask on?" he asks. "I just got back to L.A. What's with the running with the mask?"

I'm not sure if the question is directed at me, the publicist listening in on our conversation, or the world in general, but I offer my best summary on the benefits of social distancing. Unfortunately, this jogger isn't doing me any favors.

Ogg continues, narrating the scene in front of him: "The fellow I was talking about, he was wearing his mask to run and now he stopped at a house full of people and took the mask off."

The world we find ourselves in might feel apocalyptic at times, but inconsiderate joggers in masks are nothing compared to the universe that Ogg and his fellow cast members created in Snowpiercer.

Starring Daveed Diggs and Jennifer Connely, the new TNT series borrows equally from Bong Joon-ho's popular movie and the original French graphic novel. It's a familiar story of class struggle on a train carrying the last remnants of humanity through a frozen apocalypse, but with 10 hour-long episodes to explore the full length of the train and the lives of those onboard. Among them is Pike (Steven Ogg), an oppressed citizen of the tail section more interested in personal gain than political revolution.

In other words, he's morally ambiguous.

In an interview, Ogg tells Inverse why so many of his characters seem to blur the line between good and evil, gives us a promising update on the status of Snowpiercer Season 2 (and Narcos: Mexico Season 3), and clears up some explosive claims he made about Grand Theft Auto 6 last year.

Your character in Snowpiercer is one of the most morally ambiguous people on the train. Do you see him as a good guy or a bad guy?

I classify him as a survivor guy. When you're in this situation of survival and you've been in this confined space for seven years — pretty much a prison, the tail is not treated well — you tend to do what you have to do to survive. So I think some of the actions he takes are just simply to survive.

We don't know what he chose in the past. Maybe he's tried every good method and it didn't work so it became, Let me see if a little bit of force works. It's not a good or bad thing so much as he's just trying to survive, and he obviously has since he's still around. But hey, we all sometimes make choices that we regret that aren't the wisest. He's just a nice guy who's trying to survive and figuring it out. He's obviously got more than one side right?

Snowpiercer makes some pretty dramatic changes to both the movie and the comic. What do you think is the best change that people familiar with the story will like?

When you look through the graphic novels, holy smokes there are so many places, literally and figuratively, to go. In the comic, they have these hybrid kids, and I was like, "Ah! Are we gonna get that? Pike wants a family." I want a family of those things. I think it'd be fun.

“Throwing in a murder mystery is interesting.”

Obviously, throwing in a murder mystery is interesting, just having something happening on the train beyond surviving and the struggle for power. It's interesting having Daveed play an ex-cop who's all of a sudden being forced to play detective.

I know Season 2 is already confirmed, but what's the latest? Have you seen a script or started filming?

Yeah, we were filming Season 2. So that's well underway. For Season 2, I was super excited because it just goes deeper into this world. You get to explore the characters and their relationships.

It's endless. Not only is the train endless, but you can follow one character for 45 minutes. Daveed and I were always talking about how cool it would be to have a sort 1917 or Birdman tracking shot of one character going through the train. To walk 1001 trains takes hours or even days to get through. So there are so many possibilities in Season 2.

Obviously, I can't wait for people to see Season 1, but I'm also like, "Oooh, just wait for Season 2!"

So Snowpiercer Season 2 is paused because of the pandemic?

Yeah, I mean, productions shut down everywhere. We're pretty far into it, pretty much almost finished. So at least we had that good fortune. I know Narcos was only on Episode 2 when it shut down. So there were a lot of people just starting their season whereas we were kind of ending it.

You know, I was thinking about it and I feel like Pike in Snowpiercer and your character in GTA V could be the same guy. Is it possible Pike was Trevor in a past life?

It's funny because, because with Pike, Simon, and Trevor, I tend to play these characters that are morally ambiguous. What happens is, I don't see them as psychos or bad guys or whatever because when these characters are created you don't know where you're going.

With Grand Theft Auto V, I think I had 7,000 pages in the final script that we recorded over three-and-a-half years. And with Simon on Walking Dead or Pike on Snowpiercer, you're never given the entire season or the entire arc of your character. So I always want to show a bit of humor in case they want to make this character into that.

“I try to be the romantic lead, but that's just not fucking working.”

Let me show them a bit of the old, I'll fucking kill you, in case they want him to be that guy. But then let me do a little bit of this in case I go to the good side, like on The Walking Dead. I'm trying to put as much flavor into a character so that it literally provides writers and producers with options like, "Oh, you can be funny. Why don't we make him that funny guy?"

I try to be the romantic lead, but that's just not fucking working.

I'm sure you'll get there eventually.

Can't I just kiss someone? I told [showrunner] Graeme Manson I want to kiss someone and have a cup of tea.

You have a few moments in Snowpiercer. You get to eat a pretty nice piece of cake.

Yeah, man. That's it. I mean, you saw the way I was eating that cake. Not exactly. impressing my British mother with British manners. You know, there's a nicer way to do that, I suppose.

Last October, at the Brazil game show and you said something that got a lot of attention about the next GTA game. You said, "I think these games take seven to eight years to make you do the math." Was that your own theory or did someone give you a hint about the release?

That's me, every day, spouting stuff. I enjoy just talking around. My whole point is to not take anything too seriously. We're all just having a good time there.

“I'm an actor. I have no idea about that stuff.”

I'm an actor. I have no idea about that stuff. But that was the pattern as far as I knew, every seven years there was a new game. So that's where I was just coming from. Then, of course, I said it was December. December, GTA VI is coming out and I was just being an idiot. The next day, it's all over the place. Don't believe what I say.

GTA V was a huge hit. Do you get stopped on the street a lot by fans? What kind of questions do they ask?

There's a lot of, How long did it take to make? Was it fun? Did you have fun? Are you still friends with Matt and Sean? Or they don't even say the actors' names, they say Michael and Franklin. Are you friends with them in real life? Well, first of all, they're actors.

I also get I get a lot, Is Trevor you? Are you Trevor? I have to explain, it's a cartoon, okay, so I can't be a cartoon. I'm a flesh and blood human. And then, once I get tired of saying that, I generally just say, Yes, it's a documentary. It's based on my life. I just finished fucking killing three people this morning. I'm about to do a little more meth. So yeah, it was a documentary made into a cartoon. Hence you can see why I would say GTA VI is coming out tomorrow.

Of all the characters you've played, which is the most like you?

I think it's Flexon from The Tick. He's this superhero who doesn't want to be a superhero. He's a grumpy old man that's a little cantankerous but also has a sense of humor. He doesn't take himself too seriously. Those are my qualities too.

Final question: If you were on Snowpiercer and you could pick any part of the train to live on, where would you live and why would it be first class?

Oh, well, that presumptuous that I would choose first class!

Honest, I would choose the Chains. It's an area made out of recycled things. It's almost like an art installation. It's where they have the market. I would simply love to like create art there with everyone.

The first class, they're fucking rich, man. I don't wanna be with them. I'm still like a 12-year-old anarchist. I want to have fun. I want to create art. That's where I want to be, sort of in the middle.

Tail? No. First class? Don't need all that. Give me that art installation.