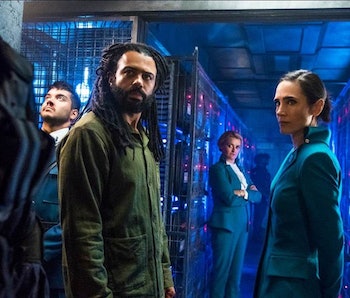 This article about Season 1 of Snowpiercer was originally published on January 16, 2020 and updated on August 8, 2021 following the release of the season on TNT. Read on for the original article, with some new changes to reflect the latest updates on this topic.

The long-awaited TV adaptation of Snowpiercer finally has reached our screens. At long last! After multiple delays and changes, the drama premiered in May 2020 on TNT. However, the journey has not been easy. Snowpiercer was first announced back in 2015 and has been in fluctuating stages of development ever since.

The series is based on the dystopian French graphic novel, famously adapted into a movie by director Bong Joon-ho. The film follows what’s left of humanity after a botched scientific experiment sends the planet into a new Ice Age. A globe-trotting train is the only thing separating passengers from life and death, but the passengers must fight to survive class warfare and social injustice.

The Snowpiercer series has gone through two showrunners, several rewrites, network shuffling (from TNT to TBS and back again), and a refusal by Doctor Strange director Scott Derrickson to do reshoots for the pilot because he wasn’t happy with showrunner Graeme Manson’s vision. Thankfully, the turbulent waters seem much steadier now. Here’s everything we know.

When did Snowpiercer Season 1 premiere?

After so many behind-the-scenes changes, the series finally premiered on May 17, 2020. The series was originally scheduled to premiere on May 31, but TNT decided to move up the date by two weeks to meet quarantine needs now that many are isolating at home.

Who is in the cast of Snowpiercer?

Diggs plays Layton Well, one of the train’s oppressed passengers from the back of the train. Layton shares some similarities to Chris Evans’ Curtis from the movie. Meanwhile, Connelly will portray Melanie Cavill, a first-class passenger living at the front of the train. Her character is also responsible for all public announcements, much like Tilda Swinton’s Mason was.

At the Television Critics Association winter press tour (via SYFY), Connelly said her character would have a relationship with Diggs’ Layton.

“For my character you meet in Episode 1, [it’s] very different from the end of the season. You come to understand what she’s been hiding and compartmentalize — her relationship with Layton and who she was and who she’s become. It’s not entirely linear, and I found it a rewarding process.”

How many episodes does Snowpiercer Season 1 have?

Season 1 of Snowpiercer contained ten episodes. In October 2019, executives at WarnerMedia watched the episodes and decided that it was best to air the drama on TNT instead of TBS, which is more comedy-focused.

Is there a trailer for Snowpiercer?

Here's the first 2020 trailer that first debuted back in January:

And this promo from October:

And be sure to check out the poster for Season 1 below, which looks pretty impressive.

Was Snowpiercer be renewed for Season 2?

Snowpiercer was renewed for Season 2 before the series even premiered, back in May 2019. The renewal announcement came around the same time the series was being moved over to TBS. At the time, the sci-fi drama was set to premiere in the summer of 2019, but further delays kept it off the air. Season 2 aired from January 25 to March 29, 2021.

Is the Snowpiercer TV show exactly like the movie?

No. While the new show shares some similarities with the movie, it’s a direct adaptation of the original graphic novel that, in some ways, sticks more closely to the source material. For example, the train on the show is 1,001 cars long (like in the graphic novel), whereas Bong’s movie shortened the length of the train dramatically to allow its story of class revolution to sweep across the entire train.

The new series also takes place just seven years after the cataclysmic event that dragged the world into a new ice age, meaning the characters still remember the old world. By comparison, the movie took place 17 years after the ice age began, with humanity more fully adapted to their new surroundings.

Snowpiercer Seasons 1 and 2 are available on-demand on TNT.

This article was originally published on Jan. 16, 2020