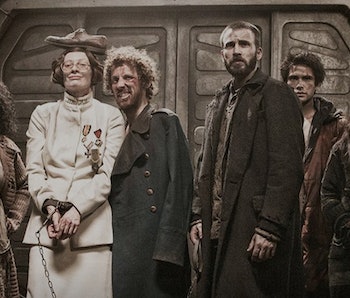 Of all the movies targeted for small screen adaptation, the recently-announced Snowpiercer tops that list. The movie — a taut sci-fi action thriller with buckets of blood and twisted dialogue — performed well critically and financially, but let’s not kid ourselves, neither of those factors matter when it comes to serialisation. Minority Report takes inspiration from a superb novel and its equally-stellar Spielbergian movie: and look how that’s turned out. Here’s why Snowpiercer looks set to right those wrongs, and how it can become a TV show worth watching.

There are major themes left to explore

Plenty of spectacle shows ignore their inciting events. The Walking Dead, for example, isn’t fussed about explaining why zombies are here, as much as it’s intent on wringing drama from their presence. Snowpiercer, the movie, is cut from a similar cloth, casting its eye toward the future of the train’s inhabitants: but its source holds rich, unmined content. The original graphic novel delves into the weapon which led to mankind’s butchering of Earth: it’s not a botched attempt at restoring global harmony between man and nature. It’s a weapon deployed during conflict that brings about the eternal ice age.

This raises issues of environmentalism. Comic artist Jean-Marc Rochette spoke out on his intention for the book, borne from his concerns about ecology as opposed to the class struggle which dominates the movie.

Tackling social struggle through a sci-fi lens works to stimulate conversation around a contemporary topic, and global warming deserves inclusion. Looking into our potential future, a grim, miserable one at that, continues to attract audiences. Yet those shows typically choose to examine how human interaction fails to adapt to societal ruin (see: The Walking Dead, The Leftovers, The 100, Revolution), and less on the hows and whys of environmental neglect. What if all of those apocalypses could have been avoided had the planet been taken better care of? What if Snowpiercer’s survivors have the answer?

While the movie’s not short by any means, it whips through that massive train fast. The driving force of the plot is Chris Evans’ character, Curtis Everett. It’s his journey to escape the decrepitude of the tail end which propels the story forth. All other commentary and character revolves around him. There’s occasional insights into others’ lives, but generally, they roll into view when they affect Curtis’ inner development. Yawn.

Let’s cut back on the one man to rule them all, and focus on the group efforts. Strength in numbers! A complement of equally fucked-up travellers across all sections of the train will do nicely. Curtis works as an introduction into the world of Snowpiercer. He’s easy for a wider audience to empathize with and subsequently a bit “meh,” so why not refocus efforts elsewhere? The guards protecting the sections? The indoctrinated schoolchildren? Hell, even the utterly monstrous Mason deserves an entire episode dedicated to her public speaking.

And what of the weapon that kickstarts the entire thing? Who created it? How did it ruin the planet? Flashbacks naturally provide a perfect route into revealing this information, and a character involved in its detonation now trapped with those imprisoned on the never-ending train journey from hell, could make for some very, very awkward scenarios. Similarly, the construction of the train and how those aboard earned their spots would fill in the gaps in characters’ emotional coverage.

The Snowpiercer is huge. Each section of the train houses different social strata, and within each section are carriages. Break these down and there’s an absolute wealth of stories hidden within every passenger. Their past and their present, as mentioned above, fleshing out the voids of character left by the insanity of the plot. How would those be presented?

The train itself inspires a structure which could easily progress in one of two ways. First would be to follow the movie: an uprising at the back of the train inspires a revolution to dethrone the front. Serialized and detailed, this approach promises a solid reinvention of the movie as a week-by-week affair building to a climactic finale.

OR, what if the entire plot was re-appropriated as an anthology? Ryan Murphy popularized this format in American Horror Story and looks to be plotting all future efforts around the flexibility it offers. Individual seasons divvied up into dedicated plots set in different sections of the train? That’d work. It’d certainly combat any staleness from its (arguably massive) location. The McGregor Riots hinted at in the movie, or The Wild Assault referenced in the comic ideal fodder for the first couple of seasons.

And it’s got to go utterly batshit

Violent action, bad language, and rampant sex are no longer television taboos. Game of Thrones thrives on all three, while comic book content such as Daredevil profits from its bloody brawls. Snowpiercer’s source material is peppered throughout with foul language — the lower classes are referred to as “tail-fuckers” — and that barely grazes the genre-blending mindfuckery of the movie. How’s about this for a WTF way of separating the poor beggars from the one-percenters?

And that fishy business is just for starters. Here’s what happens next:

They’ve got to keep those masked bastards.