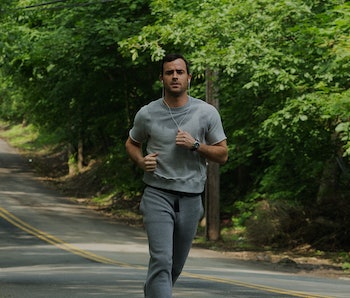 So I’m here to spoil everything that happens and tell you who dies. Just kidding, but I will tell you that season two’s first few episodes make it apparent that season one’s standouts like “Guest,” “The Garveys at Their Best,” and “The Prodigal Son Returns” were not flukes. Season two runs with the best part of season one, discards elements that didn’t work, and affirms critic Alan Sepinwall’s sentiment that The Leftovers “isn’t really like anything else on television. In terms of tone and substance, as well as its focus on the emotional and spiritual health of its characters far ahead of any questions of plot, it’s an original.”

So to all you Leftovers fence-sitters, do yourself a favor and, when it returns on Sunday, hop off that fence and get ready to be onboard with this show. Season two’s quality gives you no other choice.

Here are five things you can look forward to in season two, even if you were concerned about them in season one:

1. Tom finally being interesting. Tom Garvey was season one’s weakest link. He was the Jon Snow of the show, isolated in his own plot line, an island geographically and spiritually far away from the rest of the action. His scenes represented season one’s worst impulses, often feeling like you’d turned the TV on in the middle of a show you weren’t caught up on: they’re supposed to be meaningful, but you don’t have enough context to care.

His story was intriguing when it involved the enigmatic Holy Wayne and ranged from boring to insufferable when it involved his relationship with the insufferable Christine. Above all, it seemed like the writers had no idea what to do with him. But in season two, they’ve figured it out. Particularly in the third episode, get ready for a Tom-centric hour that doesn’t make you want to use his screen time to take a snack break. I haven’t seen the guy who plays him, Chris Zylka, in anything else, and I can’t say he made much of an impression in Season One, but he’s proving himself to be a dark horse and really killing it in season two.

2. The show remains structurally nimble, but its wonky pacing finds its stride. The Leftovers took its time unfolding in season one, unconcerned with silly things like plot as it paused to smell the roses, devoting entire episodes to days in the lives of side characters (“Two Boats and a Helicopter,” “Guest”) and it waited until the penultimate episode to even give us background on the main characters (“The Garveys At Their Best”). That alone takes balls of steel.

The thing that draws the show’s fans is the same that scares away its detractors: watching it is not a passive viewing experience but an active one that requires patience and engagement. Season two is still unconcerned with narrative convention — we don’t even see the Garveys until 45 minutes into the first episode. But the pacing feels more confident. You don’t miss the Garveys during those 45 minutes because you’re too immersed in Jarden, Texas, the show’s new setting. And yet, when Kevin turns up, you’re glad to see his bewildered/grump/crazy-eyed face again. It’s a shame Justin Theroux is in the tabloids so much for his personal life, because he should really be known for expertly cornering the market on Bewildered Pissed Off Vaguely Crazed Grumps. In the second episode — spoiler alert! — you might even see him smile a little.

3. Teenage shenanigans fall by the wayside. Jill Garvey is a teenage girl living in a world that’s been turned upside down. Her mom joined a cult, her brother took off, and her dad is a bewildered, pissed-off grouch. Her friends include an aspiring Lolita and two dudebro twins who seemed like they wandered onto the set from an entirely different show. There’s nothing inherently wrong with Jill — her angst is understandable — but it also didn’t make her particularly fun to watch in season one.

Season two shows a wiser and more levelheaded Jill. Like Tom, her character is more integrated into the story, which instantly makes her more compelling.

4. The mysteries lean more towards Holy Wayne and less towards Kevin and his nighttime wildlife adventures. Part of what makes The Leftovers different from other shows is its willingness to engage with the mystical and the mundane in equal measures. Its concept — 2% of the world’s population has mysteriously disappeared — is very genre, straying into magical realism, and yet calling it a “genre show” doesn’t feel quite accurate. It engages with grief, belief, depression, and survivor’s guilt. Those emotions are all disorienting to experience, and you know what else is disorienting? Hallucinations! Con men who may or may not have magical hugs! Home-invading deer! Ghost dogs who may or may not be real! Ghost bald men may or may not be real!

When the mystical elements worked, they worked. Holy Wayne was fascinating, especially in his death scene with Kevin. But sometimes it felt like the show was being weird and confusing as a short cut to being Artsy. Many of Kevin’s nighttime wanderings fell into the second category. Rest assured, Kevin’s facial expressions still mostly alternate between bewildered, pissed off, and crazy-eyed — we wouldn’t want him any other way — but on the mystery spectrum, season two veers more towards Holy Wayne and less towards “Are These Dogs Real??” The new location of Miracle, Texas, a town with zero departures, has a lot to unpack, but the mystery draws you in instead of feeling pretentious.

5. The score is still one of the best on TV

The soundtrack was not something that needed to be improved upon, but rest assured its quality remains the same. Floating seamlessly between classical music, The Pixies, techno, and classical arrangements of Metallica, it remains eclectic and energetic, perfectly suiting each scene.

The Leftovers garnered mixed reviews in its first season in part because an in-depth exploration of loss, grief, survivor’s guilt, and depression doesn’t make for light entertainment. It is not a show for everyone, but those who connected with it know it’s unlike any other: rewarding, engaging, and even therapeutic. As critic Todd VanDerWerff said of the show, “I would hope that even those who don’t love this as much as me will at least notice there’s something special going on here.”

Its second season draws upon the best parts of the first while improving its faults. So come Sunday October 4th, get ready to dive into one of the most interesting shows on TV, where each episode is like a hedge maze — you can try to puzzle your way to the center or just wander around, but either way, it’s an experience you don’t have every day.