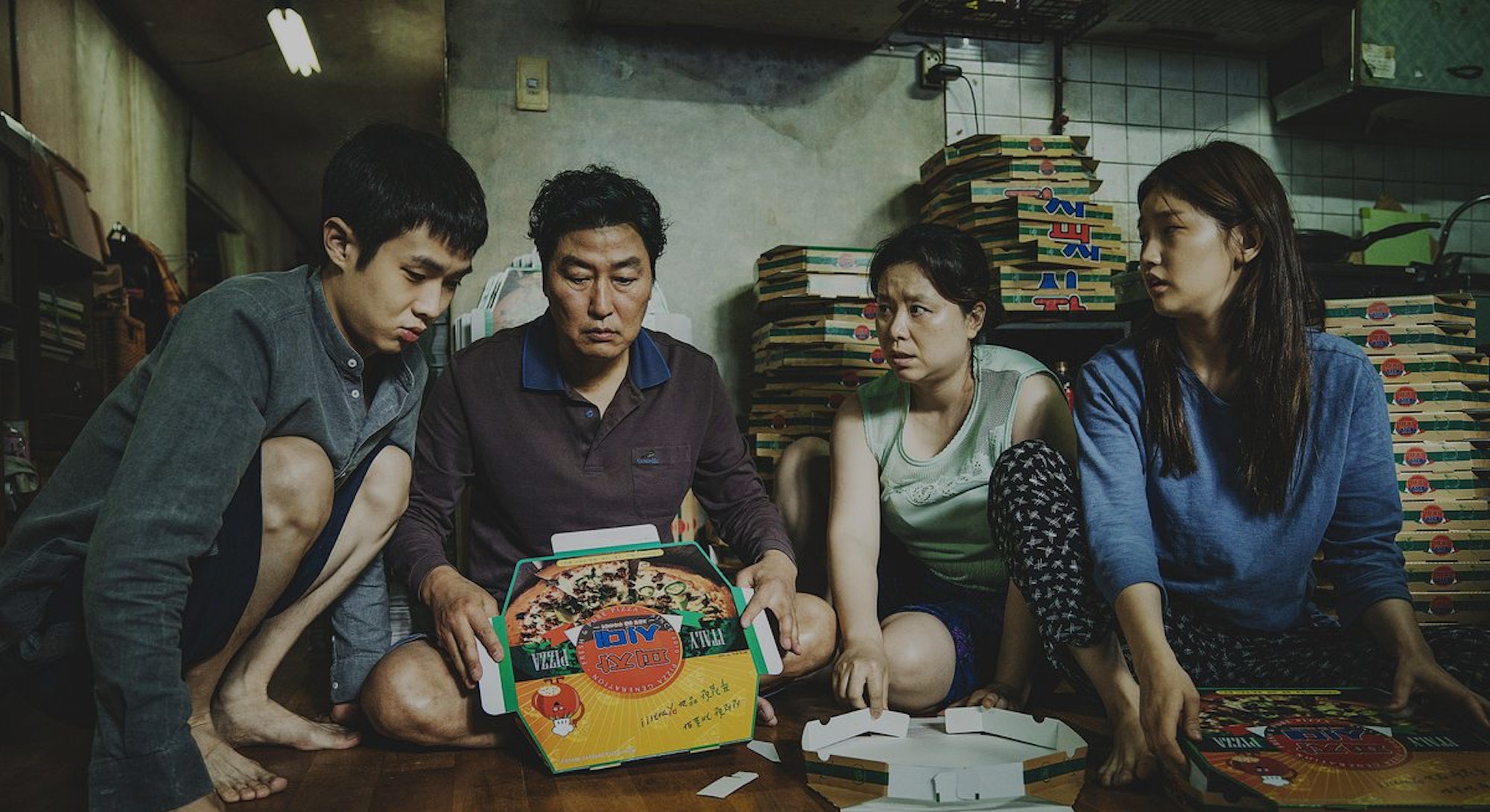 If there’s one thing everyone can all agree on as the decade closes, it’s that we’re all pretty pissed off. The why of it all… that’s a little more complicated, but some of the most popular movies of the 2010s provide one clear explanation: class rage.

Fury at the differences between the haves and the have-nots. Anger at the walls that enclose and protect the super-rich. The following 10 films showcase a diverse range of mainstream voices getting angrier and angrier over income inequality, a simmering resentment that began with David Fincher’s pointed Facebook origin story, The Social Network and boiled over in Parasite, 2019’s cinematic declaration of war against the rich.

David Fincher’s icy vision of Facebook’s rise strives to develop a class-centric cause for Mark Zuckerberg’s inferiority complex by situating Jesse Eisenberg’s Zuck in a highly cliquey Harvard whose elite circles he can never truly permeate. (See: his resentment of the aristocratic Winklevii twins and his fury that Eduardo Saverin, not Zuckerberg, is invited to one of Harvard’s secret societies). The film, to be clear, doesn’t view this as the only factor shaping Zuckerberg’s misanthropic rise to power — misplaced masculine anxiety is also a crucial component — but as a gently prodding diagnosis of class conflict, The Social Network is a logical place to start.

Kirsten Wiig’s Annie Walker was perhaps the first character in a bona fide hit film to have been displaced and seriously wounded by the 2008 recession. While Annie does have the privilege of a suburban fallback option, Paul Feig’s breakout comedy stands out for its surprisingly stark examination of the ways Annie’s economic travails snowball into a complete emotional crisis. It also succeeds in examining the cruel consequences of money woes through the prism of Annie’s female friendships, showing how class differences can drive a wedge through even the firmest foundations.

Here’s our first stop in Bong Joon-Ho territory, and it won’t be the last. The South Korean director’s bonkers allegory takes place in a dystopian future where human attempts to reverse global warming have instead frozen the planet. The entire surviving human race rides around on a gigantic train with the wealthy occupying spacious, luxuriant cabins up front, while the poor live in crowded squalor in the caboose. The unique action thriller is almost too literal, but it makes some trenchant points that will reappear on this list — most notably about how difficult the rich make it to rise against them. In Snowpiercer, the costs of taking on entrenched power are severe, and the allure of wealth and comfort is so powerful that it can divide any effort to effect change.

Director Bennett Miller illustrates the damage that results when a lunatic (in this case, John Eleuthere DuPont) has been indoctrinated by his wealth and pedigree to believe that everything, even living, breathing beings, exist only to submit to his bizarre, indomitable will. By taking steps to depict the real poverty of Channing Tatum’s down-on-his-luck wrestler Mark Schultz, the film also shows how the have-nots often have no choice but to align themselves to the whims of the wealthy. In the tragedy that befalls Mark’s brother, David (Mark Ruffalo), the film also shows the awful fallout of (even unintentionally) provoking the rich and the powerful.

The Big Short marks a crucial transition in our story, from diagnosis to real anger. The film, for all of its weaknesses, manages to indict the cruel recklessness of the bankers that caused the Great Recession while also using its expansive vignette structure to consider their impact on ordinary debtors and homeowners. The fact that the events of the recession attracted a popular comedy director like Adam McKay (and plenty of Oscar attention) speaks considerably to the degree to which these issues became important to some of the most mainstream voices in modern cinema.

This movie marks another shift, one which defines the rest of the decade. It asks us to at least consider identifying with murderous thieves because of their sympathetic motivations: Chris Pine and Ben Foster’s thieving brothers intend to rob branches of the same bank which is foreclosing on their family ranch to pay off they debt they owe that very bank. If you can get past the pure bloodymindedness of Foster’s character, it’s not a hard sell. In its stark, weary vision of a deteriorating heartland, Hell or High Water manages to find something fresh and furious to say about the state of inequality in the 2010s.

Let’s be absolutely clear, Get Out is first and foremost a film about race, a savage indictment of “liberal” whites, and a 101 course in micro-aggressions people of color face every day. It is also about class and deftly illustrates that systems of racial and economic oppression often intertwine, and in many cases cannot be extricated from each other. Jordan Peele willfully twins racial and class power; the puppet-master material power of the Armitage family stems from their wealth, but that wealth, in turn, stemmed in the first place from their whiteness. In making little distinction between racial and financial disparity, Peele’s runaway hit brought a long-overlooked understanding of power in American decisively into mainstream cinema.

At this point, the gloves are truly off. Boots Riley’s absurd, blistering attack on late capitalism pulls no punches and spares no parties. The film is more than a little ragged and scattershot, but its criticisms are truly trenchant. Riley’s chief grievances about the ways dog-eat-dog capitalism pits workers against each other and that the rat race (very literally) transforms its participants into something inhuman echoed throughout all the movies on this list, but Sorry to Bother You stands out for its all-encompassing, galaxy-brain worldview, and the pure brazenness of its takedowns.

This year, things finally boiled over. It seemed like every other movie in 2019 was about getting one over on the rich and complacent (see: Us, Ready or Not, Hustlers, and this weekend, Knives Out). Parasite stands tall even among these titles as a pitch-black vision of a family executing a complicated con just to get a slice of the pie. The arc of the entire decade is summed up in Bong Joon-Ho’s movie, which itself hurtles from exposing the inequality itself to highlighting the viciousness required to get ahead, before finally withdrawing into weary resignation at the ultimate hopelessness of the Kim family’s predicament. A decade of class fury subsides, finally, in bleak tragedy.

Ted Meyer last wrote about the legacy of The Dark Knight for Inverse. You can follow him for more cinematic hot takes on Twitter at @GrumpyMovieBoy.