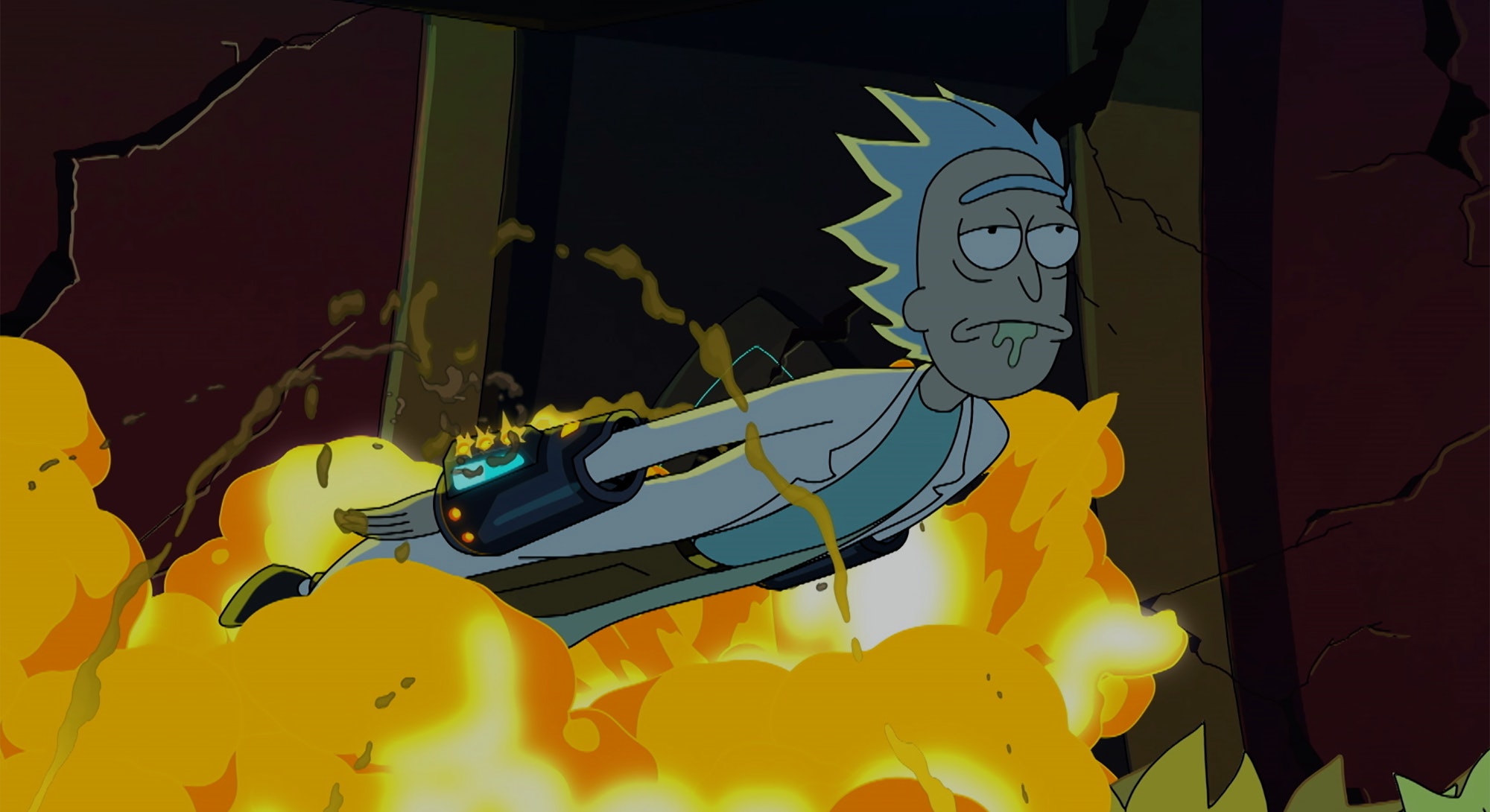 When the true Rick and Morty Season 5 finale opens on an anime-inspired sequence where Rick is some kind of samurai crow cyborg, everything is beautiful.

He burps his way through stunning vistas atop Crow Horse. He slays silly-looking owl people on behalf of crows. It hurts us, seeing Morty and Rick’s partnership broken up, but we’re safe and confident with the knowledge this is a show that will always restore the status quo at the end of 23 odd minutes ... right?

Against all odds, “Rickurai Jack” instead resolves virtually all of the show’s biggest plot threads by launching the series’ biggest villain into an entirely different multiverse — a mind-boggling and desperate metaphor for where the show’s headed.

On some level, the show will never be the same. On another, it’s never been in a more stable, safe place where it can proceed endlessly onward with procedural storytelling. It’s a bit like when Fortnite blew itself up, just because it wanted to move in a better direction.

Rick and Morty has long struggled with procedural and serialized stories. The creators apparently want to create an irreverent and satirical procedural comedy, in which every episode follows an easy-to-replicate structure: “Morty gets a dragon!” or “Jerry helps an alien make a dating app!” In tone-deaf episodes like “Get Swifty,” this approach fails. Anytime the show focuses on too many characters without giving them anything meaningful to do (i.e., “Childrick of Morty”), it also falls flat.

Rick literally spun a roulette wheel of things to replace Morty, and “Two Crows” popped up. We got more than an entire episode dedicated to Rick’s bond with these avian companions. Yet this story sounds like an idea decided by an actual roulette wheel during the writing process. Anecdotally, many episode plots seem to spring from a random idea that gets taken too far, for better or worse. (It mostly works for the crow story in "Forgetting Sarick Mortshall.")

Then there are your serialized stories, like Season 1’s “Close Rick-Counters of the Rick Kind,” which introduce us to the Citadel and Evil Morty. In this episode, there are genuine stakes and provocative character moments, enhanced by a gloomy cliffhanger. They’re necessary to keep us emotionally invested, but these are also the episodes fans cling to the most, driving up demand for answers to the series’ biggest questions — especially when it takes the production team nearly three years to follow up on a given story or character.

Rick and Morty is at its best in rare episodes like “Pickle Rick” or “The Vat of Acid Episode,” when it leans heavily on a core gimmick to quietly focus on character development. In other words, these episodes get to have their cake and eat it too by marrying the procedural with the serialized.

Much like Season 4 before it, Season 5 struggles to find that balance between the serialized and procedural.

Consider the first three episodes: Mr. Nimbus visits while Morty causes problems in a Narnia dimension, the family deals with decoy versions of themselves, and Morty dates Planetina. You could pretty much cut and paste any of these stories — or Episode 5: “Amortycan Grickfitti” — into any other season, and it wouldn’t break continuity. Then there’s the overarching plotline that involves threats to Earth in the form of huge space sperm, sentient turkeys, and the giant incest baby Naruto fighting a GoTron mecha.

You have to experience this batch of stories in order, and you also have to know Rick’s history with the President of the United States for things to make sense. But this plotting isn’t all that satisfying, because the character arcs feel so inconsistent. Why exactly did Rick get so megalomaniacal in the GoTron episode?

What do the Rick and Morty creators actually want from the show? I think they want to destroy this discrepancy altogether.

“We have serialized stuff we check in on now and then that’s sprinkled over the top of strong episodic episodes,” series co-creator Justin Roiland said of Season 4 back in July 2019. In that same interview, he called the show “Simpsons-esque,” noting that “there’s so much we can do to keep riding this train.”

If he and co-creator Dan Harmon want the series to go on for the “20, 30 seasons” Roiland mentions, they’ll have to lean more on an “adventure of the week” approach to storytelling. Like Bart and Lisa on The Simpsons, Morty and Summer can never grow up, which is something that Season 4’s Story Train episode “Never Ricking Morty” very specifically poked fun at.

Broadly, Season 5 feels like the culmination of an identity crisis that began with Season 4’s Story Train episode. The Story Lord tried to siphon Rick and Morty’s energy to break beyond the fifth wall. As part of this effort, he uses a device that tracks their Narrative Energy, Marketability, Broad Appeal, Relatability, and Story Potential. These meters go off the charts when Summer fights Tammy with lightsabers, while Rick grapples with Phoenixperson, and as Snuffles the talking dog fights cats. This is the show giving us shameless cameos and callbacks while simultaneously chastising us for wanting them.

The Story Lord represents the capitalistic pressures the show’s creators feel from their corporate overlords, whether overtly or subtextually. A good story is relatable and likable to a wide audience, and therefore easy to sell to said audience. In plainer terms: if you give the people what they want, they will like it even when it’s bad. That’s why the grand fakeout in the episode is a “potential” confrontation with Evil Morty alongside an Evil Mr. Poopybutthole and an army full of Meeseeks, Gazorpians, and Ricks.

In retrospect, this whole episode is a feverish nightmare — and a confession. It was a warning that Rick and Morty planned to tear down its own framework. After years of dancing around delicate plot threads about Evil Morty, Birdperson, and Rick’s history, Season 5’s last three episodes expend virtually all of the narrative potential left in the tank.

The Story Train episode taunts us with what we think we want, and the three-parter whirlwind that finished Season 5 drowns us in enough canonical closure to sink a pirate ship.

Evil Morty’s grand plan is to escape the Central Finite Curve, a limited version of the multiverse in which Rick is the smartest man in every universe. But he also hacks the Citadel in such a way that every escape attempt from a Rick or Morty through traditional means will kill them. The many deaths that occur literally fuel a canon that rockets Evil Morty into the wider, truer multiverse.

Evil Morty has not merely left the Central Finite Curve. He has left Rick and Morty, perhaps because the show’s creators don’t want to deal with over-serialization. After Evil Morty rips a hole and flies through it, the anomaly implodes, taking the Citadel along with it, and the rip in reality closes.

This is an aggressive amount of closure!

Say what you will about the flaws of a show like Lost, but the J.J. Abrams “Mystery Box” approach works. It doesn’t matter what is in the box, because as long as you can inspire enough curiosity to engage the viewer’s imagination on an intellectual level, they’ll stick around. With virtually every conflict resolved on Rick and Morty, what happens now?

The simple answer is that it becomes what the creators may have always wanted: A weird and sharply written procedural that pokes fun at genre classics while exploring how painful existence is in a post-capitalistic society, as seen through the lens of a dysfunctional nuclear family unit. Just with fewer serialized story arcs, okay?

Rick and Morty Season 6 is currently in development.