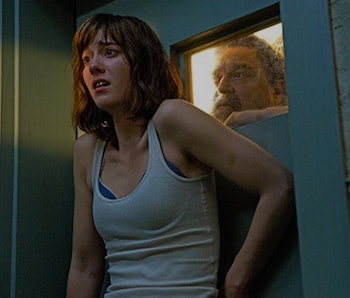 The average consumer doesn’t have a great idea of what 10 Cloverfield Lane is going to be about before walking into the theater. The advertising leading up to its release has been intentionally vague. Who are these people? Is there even a monster? The only hard information moviegoers really have is that the film is a J.J. Abrams-produced joint. To buy a ticket is to buy into his very particular approach: to creating mass cultural products by shrouding everything in mystery.

J.J. Abrams is the most withholding man in Hollywood, and it’s working for him. Even fans of his work often wonder why. There are real reasons.

In a 2007 TED talk, an earnest J.J. Abrams told a well-heeled crowd that one of the most special people in his life is his grandfather. This grandfather took him to Tannen’s Magic Store in midtown Manhattan where a young Abrams purchased a $15-for-$50 magic tricks deal, all wrapped up in a “mystery box.” Abrams didn’t open the box and still hasn’t. The idea caught on, and became a calling card for the director, who went on to bigger and better things after having done really big things. He says now that he thinks the Mystery Box idea is overused and incorrectly applied — that it’s a shallow understanding of his work.

Is 10 Cloverfield Lane actually a mystery box? Well, no, not really. It’s a movie people don’t know much about and will learn more when they see it. Lost was a show that intentionally withheld resolution. These are different things. That said, there are biological and evolutionary reasons mystery is a powerful tool for storytelling. Abrams is good at entertaining humans because he understands them.

Our brains are designed to constantly seek out coherences, structure, and order. Like almost everything biologically, there’s an evolutionary reason, here: It benefits a human to know what’s coming next. Uncertainty means uncertainty for survival, therefore our sensory and cognitive abilities aim to find reliable information. Lucky for us, human instinct means our guesses aren’t usually too terrible.

When it comes down to it, our explanation-seeking brain likes predicatability. And when the brain is able to link patterns correcting — like figuring out what we’ve believed to be a conspiracy; finally discovering what the hell the Lost island is — there’s a dopamine release and we get a sense of pleasure.

We seek out mystery because we get a high when the mystery is resolved. That’s why curiosity is described as “emotional-motivational state” — you feel the unpleasantness of uncertainty and then the eventual reduction of that, which is rewarding. This is so enticing, that humans pursue the unknown, unprompted from any stimuli.

There is, however, a small chance that mystery resolution won’t make you happy.

A study from Ohio State University found that people with high-self esteem are okay if a mystery ends unexpectedly. Conversely, people who have low-self esteem feel depressed if they can’t predict an ending correctly. So, if you have the need to feel smart at the end of the day, maybe skip 10 Cloverfield Lane — it will likely end up being nothing like you expect.