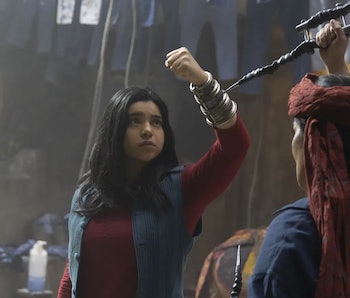 Last week's penultimate Ms. Marvel episode, "Time and Again," provided an interesting history lesson on India's struggle for independence and the tragic Partition of India in 1947 that tore families apart, this latest chapter has also set in place pivotal events that should make for a rousing finale.

After black-and-white newsreel footage relayed details of the end of British rule, we skipped over the chaotic Karachi train sequence that ended the previous installment titled, "Seeing Red," and instead went back to 1942 when Kamala's Clandestine great-grandmother, Aisha, and rebellious great-grandfather, Hasan (Fawad Khan), first met.

Their relationship deepens and they're blessed with a daughter (Kamala's grandmother, Sana) while external fires of freedom intensify. Najma arrives to reunite their otherworldly clan and learns that Aisha has hidden the magic bangle for safekeeping. As riots erupt and we advance to the August 1947 train station scene, Najma appears and kills Aisha during the mobbed exodus.

Flash to Kamala experiencing this same instance in a time-twisting event, wearing the mystic bracelet. She meets a dying Aisha who reiterates her duty to protect the bangle from Najma and the Clandestine. Sealing the time loop, Kamala is shot back to the marketplace where Najma and her colleagues try to enter a dangerous shimmering portal. Najma is reminded of her son, Kamran, and sacrifices herself to protect him as stray energy pulses imbue him with powers.

Muneeba and Sana catch up with Kamala and her mother finally accepts the reality of Kamala's magical destiny. Finally, we find Kamran hiding out with Bruno just as a lethal D.O.D.C. drone discovers his location and opens fire as we fade to black.

When is the Ms. Marvel Episode 6 release date?

What is the Ms. Marvel Episode 6 release time?

How many episodes is Ms. Marvel Season 1?

What is the main Ms. Marvel plot?

Ms. Marvel is a live-action adaptation of the Marvel Comics character created by editor Sana Amanat, writer G. Willow Wilson, and artists Adrain Alphona and Jamie McKelvie. Ms. Marvel first appeared in the pages of 2013's Captain Marvel #14 before scoring her own series in 2014.

Kamala Khan is an imaginative Muslim teen dealing with the trials and tribulations of high-school life, family drama, and understanding the limits of her newly-discovered powers while growing up in Jersey City. This energetic mega-fan with a love of all things Avengers and Captain Marvel discovers more about her family's secret superhero past and her own destiny when she comes into possession of an ancient bracelet with the supernatural powers of light.

Who is in the Ms. Marvel cast?

Is there a Ms. Marvel Episode 6 teaser?

There is no teaser for Ms. Marvel Episode 6, but chances are we'll see Kamran (Rish Shah) emerge as a potential villain after he learns of his mother's death and might blame Kamala for her demise. Did Najma transfer her powers to him upon her death? Will Kamala get her full flashy costume? And did any Clandestine survive and might we end up in the Noor Dimension somehow?

Will there be a Ms. Marvel Season 2?

At this time, Disney and Marvel Studios president Kevin Feige have been silent on any plans for another season. However, if the hit comics are anything to go by, Kamala has enough adventures for a sophomore season. Looking further into the future, Ms. Marvel is destined to appear in the 2023 Captain Marvel sequel, The Marvels, alongside Carol Danvers and Monica Rambeau.

More like this
Entertainment
8.4.2022 7:00 AM
The Sandman release date, time, plot, cast, and trailer for Netflix's dark fantasy series
By Jeff Spry
Entertainment
7.30.2022 12:00 PM
How the most iconic Ms. Marvel scene confirmed the show’s “enormity”
By Mónica Marie Zorrilla
Entertainment
7.27.2022 10:30 AM
Daredevil: Born Again could give Kingpin a shocking new role ripped right from the comics
By Chrishaun Baker
Related Tags
Share: