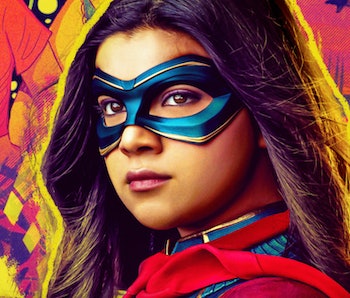 Ms. Marvel has taken its sweet time turning Kamala Khan (Iman Vellani) into a full-fledged superhero. With only one installment left to go in the first season of the Disney+ show, Kamala has yet to don her official costume and truly gain control of her cosmic powers. Ms. Marvel Episode 5, however, does a lot to bring Kamala closer to her inevitable transformation — and it does so in a way that feels even more thorough and thoughtful than the comics.

The Disney+ series’ latest installment doesn’t just present Kamala with several of the remaining pieces of her superhero costume, but it also explains the meaningful origins behind two key pieces of flair.

Kamala’s Necklace — Near the end of Episode 5, Kamala shares a bittersweet farewell with her new friend, Kareem/Red Dagger (Aramis Knight). Before the two characters part ways, Kareem gives Kamala the red scarf he uses to conceal his identity, telling her to use it “just in case” she gets into more trouble.

In the following scene, Kamala’s mother, Muneeba (Zenobia Shroff), picks a piece of jewelry off the floor of the Karachi market where her daughter recently came to blows with the Clandestines. Inspecting it, Muneeba discovers that the piece is actually the necklace Kamala has worn throughout all of Ms. Marvel. However, it’s been broken.

Instead of spelling out Kamala’s name in Arabic, the necklace has been reshaped into a lightning bolt that’s practically identical to the one that will soon cover the front of Kamala’s Ms. Marvel costume.

Kamala’s Superhero Costume — MCU fans have known for a while now what Kamala Khan’s live-action superhero costume is going to look like. The official Disney+ page for Ms. Marvel even features a cover photo of Vellani wearing the outfit, so it’s not like her putting the costume on in the Season 1 finale is going to be a surprise.

However, Ms. Marvel has gone out of its way to imbue each piece of Kamala’s costume with deeper meaning.

Episode 3 saw Bruno (Matt Lintz) make Kamala’s superhero mask for her. Now the show’s latest episode has not only revealed that the red scarf Kamala will wear as Ms. Marvel comes from Kareem, but also that her costume’s iconic lightning bolt is inspired by the necklace that once spelled out her name. The series has done a lot to foreshadow Kamala’s transformation from her life as Kamala Khan to life as Ms. Marvel.

The Inverse Analysis — While the MCU has always done a good job of exploring the lives of its heroes, the franchise has rarely put much effort into explaining their costumes or imbuing them with depth. In fact, most of the MCU’s superhero costumes have been designed on a whim. Ms. Marvel has put far more effort into the issue.

That’s refreshing. Although considering how invested Ms. Marvel has been in exploring the ways Kamala Khan is the product of her ancestors’ experiences, it shouldn’t come as much of a surprise that the series has also chosen to make her costume a collection of gifts she’s received from her loved ones.