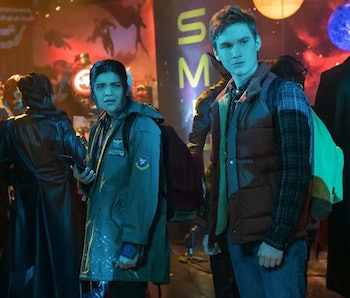 As much as Ms. Marvel is about superpowers, a post-Endgame Marvel Cinematic Universe, and the immigrant experience, it’s also about what it’s like to be a teenage girl — particularly in today’s chaotic world. Crushes, fandoms, and bullies are all just as important to Kamala Khan as her newfound superpowers; They’re just another part of growing up. But over the past four episodes of Ms. Marvel, we’ve been introduced to three different male leads who could possibly fill the requisite role of love interest in this coming-of-age story. But who could it be? It’s the biggest question since Team Edward and Team Jacob. And what’s more relatable than grappling with multiple crushes at once?

Bruno is what every superheroic teenage girl could want: He does research, develops gadgets, and even hangs out with her family. But while it’s pretty obvious Bruno has feelings for Kamala, she’s absolutely oblivious to this. It’s a tale as old as time: Bruno is stuck in the friendzone.

Now, Kamala is halfway around the world while Bruno is headed to CalTech for an early immersion program. He may have missed his moment entirely. But nobody knows Kamala like Bruno, and she’s bound to come calling on Bruno for help at some point in the future. Hopefully, he can muster the courage to confess his feelings and she can open her eyes, mind, and heart to see him as more than a friend.

Kamran is the new kid at school with an exotic accent and dashing good looks that fall into the “tall, dark, and handsome” archetype. That’s why Kamala is so charmed and flattered when he pays attention to her. He even offers driving lessons! But all this charm is skewed when it’s revealed Kamran is actually working for his mother as a way to lure Kamala into assisting their fellow Djinn.

But in the confrontation at Aamir’s wedding, Kamran seems to flip sides, assisting Kamala and Bruno in their escape. Could this be the first sign of a moral awakening for Kamran, where he realizes he’s on the wrong side of this fight and earns Kamala’s trust — and maybe her heart? Who knows what’s next for this golden boy, but one thing is clear: he’d definitely be Kamala’s first choice were it not for the whole “son of a woman trying to conquer her” thing.

In the comics, Kamran is actually a hometown boy like Bruno, and he has powers of his own. But much like his MCU counterpart, he led her straight to a villain, and the two never worked out romantically.

While visiting her family in Karachi, Kamala stumbles on the local vigilante talent: a masked legacy crime fighter known as The Red Dagger. He later introduces himself as Kareem and helps Kamala understand just what threat the ClanDestine poses to herself and Earth at large.

They share a biryani around a campfire, and it’s certainly looking like this could lead to a vacation fling for young Kamala. In the comics, The Red Dagger serves a similar purpose but later moves to New Jersey as an exchange student. Could this happen in the series to eliminate the awkward prospect of a long-distance teenage relationship?

The Inverse Analysis — Three love interests may seem like too much for one series, but this is the first MCU project focused on a teenage girl. She should be allowed to not only meet multiple boys but choose which to keep platonic and which to pursue. Being in a scene with a boy and even flirting with him doesn’t make her beholden to him for the rest of the series. Kamala’s got plenty of options, and she’ll choose when the time is right. For now, she’s got bigger fish to fry — mainly saving the world.