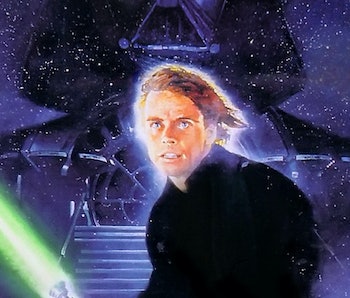 Baby Yoda has a name and an ancient Star Wars planet is Mando's last, best hope for finding a Jedi babysitter. But, when The Mandalorian Season 2 concludes, will we see another very famous Jedi Knight — the guy who started it all in the first place — Luke Skywalker? In "Chapter 13, The Jedi," we're strongly led to believe that if Mando takes Grogu (Baby Yoda) to the planet Tython, that some other living Jedi could get in touch, and cause the entire nostalgia balance of the Force to tilt in a Skywalker direction.

Here are five reasons why The Mandalorian has set itself on a hyperspace course for a Luke Skywalker appearance in Season 2, And, in the interests of balancing the Force, let's follow that with three reasons why we might not want to get too cocky about Luke just yet. (Ya'll ever heard of Ezra Bridger?)

5. Ahsoka's line about the Jedi scarcity might mean only Luke is left

When Ahsoka passes on training Grogu, she tells Mando that if he takes Baby Yoda to the planet Tython and puts him on a seeing stone, there's "a chance that a Jedi might sense his presence and come looking for him." She also adds: "Then again, there aren't many Jedi left."

Okay, but how many Jedi are left at this point? The Mandalorian takes place five years after Return of the Jedi, and in that movie, regular Yoda told Luke Skywalker that "when gone am I, the last of the Jedi will you be." Since then, Star Wars has changed its story and by the time of the Rebels finale, it was clear that in the years right after ROTJ, Luke's "last Jedi" status was muddied by the existence of Ahsoka Tano, Ezra Bridger, and possibly Jacen Syndulla. [Editor's note: Mace Windu lives!] Before The Mandalorian Chapter 13, you could reconcile this by saying the following: "Yoda was still right because Ahsoka didn't consider herself a Jedi, Ezra Bridger was missing and Jacen Syndulla is a little kid."

So, assuming that Ezra Bridger is still missing (or somehow not in the picture), then Ahsoka can only be referring to Luke, right? If the seeing stone does attract Jedi, Luke is the only true Jedi who is around the galaxy at this time.

4. Luke was the person who made Boba Fett lose his armor

In "Chapter 9, The Marshal," a big deal was made out of Mando getting back Boba Fett's lost armor from Tatooine. That episode ended with us seeing a helmetless Boba Fett wandering around Tatooine. Now, from Fett's perspective, the whole reason he's in this fix is because of Luke. If Luke hadn't raided Jabba's Palace, none of this would have happened. Dramatically, this gives us some juicy material if and when Fett appears later in the season. If Mando sympathizes with Fett (possible?) and learns that the Jedi killed Fett's dad (true!), then meeting another Jedi becomes fraught with intense conflict.

If the Jedi who comes looking for Baby Yoda is — from Mando's perspective — also the guy who screwed-over Boba Fett, then suddenly Luke's (hypothetical) return flips the script on how we think about Luke. In other words, Mando might not see him as a good guy.

3. Tython lines up with Luke's location and activities

Tython — the place Mando is supposed to go with Baby Yoda — is a Legends planet that seems to be making its way back into regular Star Wars canon. Current Star Wars canon has already visited Tython via the Doctor Aphra comics, but The Mandalorian could make the planet even more important.

In the Dark Horse comic book series Dawn of the Jedi (2012), Tython was posited as the real origin planet of the Jedi, which back then (26,000 years before A New Hope) were still called the "Je'daii." If we're meant to believe that the newly rebooted Tython in Mando carries some of the old backstories, then this place could potentially be the site of an early Jedi Temple. Sound familiar? In The Force Awakens, Han said Luke went looking for "the first Jedi Temple," after Kylo Ren turned evil. Since then, we've all generally accepted the idea that Ahch-To (aka, Porg island) was the very first Jedi Temple, but, at the risk of being pedantic, what about the "Je'daii?"

Let's assume that "the Jedi" before the classic trilogy were strictly an Old Republic organization. This would match Obi-Wan's statement that "for a thousand generations" the Jedi were the guardians of peace in the Old Republic. But, the Force is older than the Republic, and obviously, older than the Jedi. Maybe a proto-Jedi organization thrived on Tython, that's the first Je'daii Temple, and the first Jedi Temple was still the one on Ahch-To.

In other words, if Luke was gathering old Jedi material before forming his first school, it makes sense he would have hit-up Tython, or at least, be aware of its existence. On top of that, in old canon, Tython was a "Core World," meaning it wasn't on the Outer Rim, where most of the Mandalorian action takes place. The "Core" is closer to, the center of the galaxy. If Luke is operating in New Republic space in this time, then that's where he is— in the neighborhood of Tython.

In all versions of the canon, Luke Skywalker's priorities after the Empire falls is to help train a new generation of Jedi Knights. On top of that, he's also interested in tracking down all material about the Jedi and the Sith and making sure there's a record of all that, too. If Grogu gets the attention of a Jedi after going to Tython, it seems like it makes sense that it would be a Jedi who is looking for other Jedi. Ahsoka, as she freely admits, has her own agenda. Ezra Bridger (assuming he's been located) doesn't necessarily have the same goals as Luke. Or, at the very least, we don't know what Ezra is doing.

There's also a good bet that Leia quit her Jedi training pretty quickly after the Battle of Endor, which is just one more reason Luke would be eager to get more Jedi students.

Extra-fictionally, having Luke Skywalker show up in The Mandalorian wouldn't require a single viewer to wonder who the character was or what he was doing. So far, with this season of The Mandalorian, that has not been the case. The legacy characters introduced in Mando Season 2 might be termed "fan favorites" (Bo-Katan, Boba Fett) but other than Ahsoka, it's hard to call any of these characters A-listers in the Star Wars pantheon.

If Luke Skywalker were to return to The Mandalorian, it would inexorably raise the stakes. But, on top of that, it would also create a situation where the finality of what to do with Baby Yoda could convincingly be solved. Ahsoka refusing to train little Grogu is one thing. But if Luke passes on training this little guy, then, we really believe this is Mando's and Grogu's story.

Luke is the Jedi elephant in the room. Everyone knows about him. Everyone is wondering what he would think about Baby Yoda. Now, The Mandalorian has created a way for Luke to return without stealing the spotlight.

3. Ezra Bridger is the better bet

You could argue the Jedi who "finds" Grogu should be Ezra Bridger, not Luke Skywalker. In terms of what has been set-up in the show so far, this actually tracks pretty well. Ezra, like Ahsoka, is someone we've never seen as a live-action character, meaning it's a clean slate for The Mandalorian. Ezra was lost in hyperspace at the end of Rebels, and Ahsoka has been looking for him ever since. Right now, in the Mando timeframe, we don't know if Ezra has been found, but considering Ahsoka seems to be looking for Grand Admiral Thrawn (who was last seen with Ezra) it kind of doesn't matter. If Ahsoka has found (or will find) Thrawn, then it seems like Ezra comes along with that deal.

If Ezra is coming to The Mandalorian anyway, then, wouldn't the easiest way be for him to find Baby Yoda? And if Grogu is the catalyst for Ezra's return then it's kind of a two-for-one deal. A plot point from Rebels gets resolved, and, we get another existing Jedi from the animated shows into Star Wars live-action. Plus, Mando is connected to Ahsoka now. Ahsoka is connected to Ezra. That math works out slightly better than Luke. (I mean, Luke's dad trained Ahsoka, but whatever!)

2. There just won't be any Jedi on Tython

This theory has been popping up with fans, and notably on Reddit, and it goes like this: It's gonna be a massive let-down. Grogu won't find any Jedi from the seeing stone, but he could (maybe) find some Sith or Force-users who are not "good guys." What if Mando himself is Force-sensitive? What if the person Grogu reaches out to in the Force is just Mando? The idea that Baby Yoda is supposed to have another, different home, feels like an outcome that will never happen. And so, the idea that Erza or Luke will find Baby Yoda might just be a red herring we've all created for ourselves.

Also, Ahsoka didn't say the seeing stone was for Grogu to find cool Jedi Easter eggs. She said it was for him to "choose his path." Maybe his path is just not doing Jedi stuff and chilling with Mando forever.

1.Luke Skywalker has too much baggage

Because there's so much baggage with bringing on Luke Skywalker (do you recast him? do digital de-age Mark Hamill?) it also feels possible that it's just not going to happen because it's a big hassle. Sure Mark Hamill said Sebastian Stan could do the part, and yes, "young" Lando and Han have recently been recast. But, didn't Disney just finish the "Skywalker saga?" Bringing back Luke Skywalker onto a show called The Mandalorian might work in terms of the timeline, and even, might make the narrative better. But would it still be The Mandalorian?

A Luke Skywalker appearance, even a cameo, just might be too much. Luke is the one Star Wars hero who represents all of Star Wars just by existing. If your show is about Din Djarin and his baby Grogu, a guy named Skywalker doesn't belong in the story. Even if he is available.