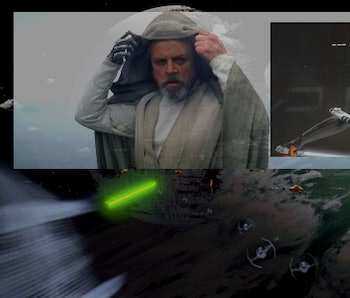 In Star Wars: The Last Jedi, Luke makes a big point of not being “the last Jedi,” but he hadn’t been the last Jedi for a while. And it looks like Yoda lied, again. The finale of Star Wars Rebels clearly establishes at least three other Jedi folk were alive after the events of the Battle of Endor in Return of the Jedi. But the biggest question now is who the hell is Jason Syndulla and did Kylo Ren kill him?

Spoilers are ahead for the finale of Star Wars Rebels.

On Monday, Rebels aired its three-part finale, which resolved the majority of the animated show’s pre-A New Hope plotlines by mostly focusing on Ezra Bridger’s home planet of Lothal. Here’s the short version: Lothal was saved, and conveniently, as Sabine says in the final voiceover, the Empire never decided to bother it between A New Hope and Return of the Jedi. Which sort of throws a wrench in just how oppressive the Empire really was. If Lothal was totally safe during the time of the original trilogy, was the Empire really that effective? Would several other planets have had an incentive to fight the Empire had they been left alone like that? Um … let’s not think about it too hard.

The big news in the finale is clearly about the time-jump in the final minutes. Suddenly, the Battle of Endor has happened, and the Empire has been defeated, which means we’re totally in pre-The Force Awakens territory here. And that’s where things get dicey. In saving Lothal, Ezra — a Jedi who was, like, way better trained than Luke — stranded himself somewhere in hyperspace. After the Empire was defeated, Sabine and Ahsoka — a Jedi trained by ANAKIN SKYWALKER — went looking for him. So, counting Ahsoka and Ezra, that’s two living Jedi who were more proficient than Luke during the events of the original trilogy. Ezra’s got a good excuse for not getting involved in helping out with the Rebellion, as he was stranded in hyperspace. But what’s Ahsoka’s deal?

Then, there’s the other bombshell: Hera Syndulla totally had a child — Jason Syndulla — with Jedi Knight Kanan Jarrus. This means Hera is pregnant for the last several episodes of Rebels and finds time to have the child sometime right before she flies the Ghost during the Battle of Scarif in Rogue One. So, when you round up Jason, Ezra, Ahsoka, and Luke Skywalker, you’ve got four Jedi-ish people running around during the pivotal years of the Galactic Civil War, meaning Yoda saying, “the last of the Jedi you will be” has now been rendered bullshit.

In fairness, Star Wars has pulled this kind of thing before. During the run of The Clone Wars, fans assumed Ahsoka would have to die in order to satisfy canon, but instead, she just left the Jedi order. Technically speaking, the only person who self-identifies as a Jedi, and whose whereabouts are known, is Luke. Meaning, Yoda should have said this:

“When gone am I, the last of the people who can use the Force and feel like actually using the word “Jedi” to describe themselves, will you be. Though, if being honest I am, there are a few other people out there who are pretty fucking good with the Force, and one of them best friends with your dad, she was. But worry about that, do not. The last Jedi, you are. Nice ring to it, it has, hmm?”

Obviously, Hera and Kanan’s son, Jason, was probably a student at Luke’s failed Jedi school sometime right before The Force Awakens. Did Jason get killed by Kylo Ren or join him? Also, were there other teachers? Did Ezra and Ahsoka help out, too? Were they adjunct teachers at Luke’s Jedi college? Disgruntled guest speakers?

Either way, if Jason was a student at Luke’s school, then get ready for some canonical stories in comics or novels — not to mention fan fiction — in which he and Ben Solo race speeders and try to figure out which one of them is the cockier budding young Jedi.