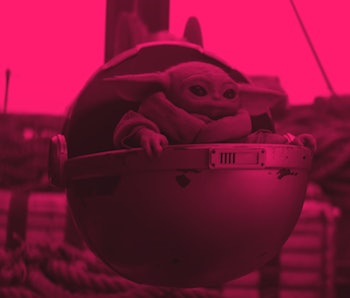 If we pretend that Star Wars movies and TV shows weren't filmed totally out-of-order, and we were only concerned with the chronology of the stories, then we'd be watching The Mandalorian right after Return of the Jedi. The Ewoks would still be jamming about the death of the Emperor, while Luke Skywalker readies to bring the flame of the Jedi back to life.

The thing is, almost nothing about what you imagine the galaxy will be like post-Return of the Jedi matches up with Season 1 of The Mandalorian. Furthermore, we know that in The Force Awakens, the Jedi still haven't returned three decades after they were supposed to. So what's up with the Jedi between the original trilogy and the sequels? It seems like it's up to The Mandalorian Season 2 to answer that question.

For the Skywalker-saga purist, the answer to the question just posed is simple: Luke tried to bring back the Jedi Order, but Ben Solo turned to the Dark Side and ruined all of it. But Luke's Jedi Temple was destroyed by Ben Solo in 28 ABY, roughly six years before the events of The Force Awakens. If we assume that the only Jedi in the galaxy were connected to Luke Skywalker, that means from 4 ABY (Return of the Jedi) to 9 ABY (The Mandalorian) and all the way to roughly 20 ABY, there just weren't any Jedi at all. We already know that just isn't true.

We know the Jedi didn't formally return until Luke started up his school, but what about before that? Season 1 of The Mandalorian has already made it clear that someone like Din Djarin (Mando) is only vaguely aware of the Jedi. The reason he doesn't know anything about these so-called "enemy sorcerers" could be chalked up to the fact he was raised by other Mandalorians, but it feels like something he would have come across once or twice in his line of work. But, the fact is, Mando doesn't know shit about Jedi, which suggests that a lot of people in the galaxy don't either. How can this be the case?

The question Mandalorian Season 2 must answer

Even if Mando himself isn't privy to the larger politics of the galaxy, there must be some reason why, even after the victory of the Rebel Alliance, the Jedi are still relegated to myth and legend. In A New Hope, Motti says Vader has a "sad devotion to that ancient religion," even though the Jedi were active and numerous when Motti was a teenager. The point is, historical records in the Star Wars galaxy are absolute garbage and the Emperor's anti-Jedi propaganda was very effective. But, if certain Force-users did survive (like Baby Yoda, and Ahsoka Tano) the question is, why were they still in the shadows after the fall of the Empire?

Let this sink in: The Republic holds power during the time of The Mandalorian, yet the remnants of the Empire are still around, and your average person still doesn't really take the concept of the Jedi seriously. But why?

The answer might be connected to the Darksaber and Moff Gideon

Both "the Client" and Moff Gideon work for what's left of the Empire, and they want Baby Yoda badly. We could surmise the reason for this is simple: The Imperial Remnant knows more about the Jedi than your average Republic citizen, and that's because they were the guys who systematically removed the knowledge of the Jedi from the public consciousness. Part of this was because the Empire killed all the Jedi, but it was also very clearly through propaganda and control of information. Think about how ill-informed Luke was about the actual Clone Wars in A New Hope. Fast-forward to how little Rey understands about the Rebellion against the Empire in The Force Awakens. Time after time, recent history is totally misunderstood by citizens of the Star Wars galaxy, and part of that is because the bad guys are always writing the history books. In The Force Awakens, Kylo Ren mentions that part of the map he needs comes from "the archives from Empire." The Empire has lots of archives! They know everything!

Meanwhile, Luke Skywalker and Lando were running around on random planets, trying to find clues about Sith Daggers. The Republic — along with Luke and what remain of the Jedi — are running around like Indiana Jones with incomplete maps. Meanwhile, the Empire — soon to become the First Order — has all the information. Since Moff Gideon is rocking the one and only Mandalorian lightsaber, he probably knows way more about Baby Yoda's origins than anyone else.

That is, he knows more than anyone else we've met during the events of The Mandalorian. If characters like Sabine Wren and Ahsoka Tano really do return in Mando Season 2, than what they bring to the table is more than fan service. Instead, they'll supply the heroes of the story with something the villains always seem to have more of in Star Wars — information.

The Mandalorian Season 2 will hit Disney+ on October 30.