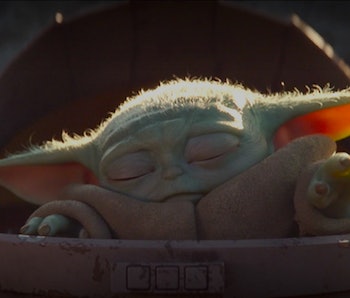 The best part of The Mandalorian, other than Nick Notle’s brittle and brilliant Kuiil alien, is obviously Baby Yoda. The green 50-year-old toddler has made its way into the hearts of every Star Wars fan faster than anyone can say “Porg.” But what’s up with this thing? What’s its name? Why is everyone after them? How do they tilt the balance of the Force?

One new theory suggests that the most obvious answer to all these questions has been staring us right in the face. We know who this is. And if this theory is true, it simplifies everything about The Rise of Skywalker in a big way.

Speculation for The Mandalorian and The Rise of Skywalker ahead.

So, the new theory is basically the simplest explanation for Baby Yoda in the galaxy: It’s Yoda. Not Yoda-Yoda, exactly, but instead, a clone of Yoda. According to Digital Spy and a few other outlets, the existence of the cloning icon in the “Chapter 1” doesn’t mean the Empire wants to try and clone Yoda, but instead, that they already have. If this theory turns out to be right, it clarifies The Mandalorian but also, sets-up a few big plot points for The Rise of Skywalker.

If Baby Yoda is 50 years-old and a clone, they were possibly created by the Jedi, in secret

In “Chapter 1” of The Mandalorian, Doctor Pershing (Omid Abtahi) is sporting a logo similar to the cloners on Kamino in Attack of the Clones. Now, even though the Kamino cloners made the Clone Troopers, who, eventually betrayed the Jedi, in theory, this cloning facility was, at least at first, affiliated with the Jedi. In fact, as established in The Clone Wars episode “The Lost One,” a well-meaning Jedi named Sifo-Dyas did in fact commission the creation of the clone army in the first place. Later, his efforts were hijacked by Count Dooku and Palpatine, but the point is, some of this early cloning mojo was under the influence of the Jedi.

Recently, Oscar Isaac suggested that the entirety of Rise of Skywalker is the culmination of a “chess match” between the Jedi and the Sith. So maybe Sifo-Dyas —or another Jedi — was responsible for the cloning of baby Yoda, roughly 40 years before The Phantom Menace. Hell, at that point in time, Count Dooku was still a good guy, and probably Yoda’s apprentice (or Qui-Gon’s master), so maybe he decided to snag some Yoda DNA on the sly, thinking that one day, the Jedi might need to replacement for their greatest leader. If any of this is true, it would mean that the seeds for both The Mandalorian and The Rise of Skywalker actually pre-date the events of the existing films.

Okay, so the Jedi didn’t know that Palpatine was secretly a Sith Lord, and prior to The Phantom Menace, they didn’t even really publicly acknowledge the existence of the Sith. But, then again, because Sifo-Dyas was clairvoyant, he knew that a Sith Lord would rise, and necessitate the existence of a clone army. This means it’s also possible that Sifo-Dyas or another clairvoyant could have foreseen the eventual cloning of a said Sith Lord, too.

Similarly, the Jedi wouldn’t even have needed active clairvoyance, if some kind of prophecy suggested something like this would happen at some point. In the Dark Empire comic books, Leia consults ancient Jedi Holocrons, which basically tell her exactly what is happening in her own contemporary life; a kind of Force-Nostradamus. Now, Dark Empire isn’t canon anymore, but Holcorons (invented in that series) totally are, and a reborn (maybe clone) version of the Emperor is also now canon, too.

If a future knowledge of a cloned Sith Lord did make its way into the Jedi intelligence pool (either by clairvoyance or prophecy) then it totally stands to reason that at least one Jedi was like: “Oh, they’re gonna clone their Sith Lord. We should clone our best Jedi, right?”

In Revenge of the Sith, Yoda fought Palpatine for control of the entire galaxy. Sadly, Yoda lost. But what if a Yoda clone could correct that balance. Assuming the Yoda baby is alive in The Rise of Skywalker (and a little bit older) it’s conceivable, they could totally square-off against a newly reborn Palpatine. If so, this would be the strangest rematch in Star Wars history, but also, potentially, the most satisfying, too.

Yoda’s surprise appearance is part of what made The Last Jedi amazing, and now, thanks to some cloning shenanigans, a similar cameo could make Rise of Skywalker shocking, too. The only question now is, do we call this Yoda baby Yooda or Yodaa?