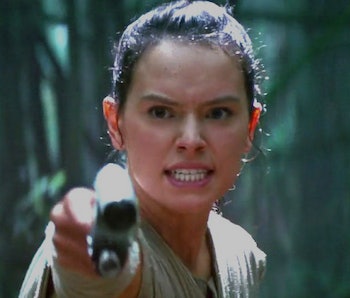 Ever since Daisy Ridley first appeared onscreen in Star Wars: The Force Awakens, fans have wondered about the origins of Rey and speculated that she might be a clone of some famous Jedi or Sith. Even after The Last Jedi revealed that she came from nothing, the mystery of Rey has only grown stronger, and a few subtle clues from Lucasfilm’s new live-action Star Wars show The Mandalorian could provide fodder for one of the most far-out theories yet about Rey’s origins ahead of a potential huge reveal in Episode IX: The Rise of Skywalker.

Could Rey share some DNA with Yoda? It might sound ridiculous, but if you look carefully, the evidence is there to back this theory up.

Spoilers for The Mandalorian and speculation about The Rise of Skywalker ahead.

In case you’ve been hiding in a sarlacc pit and haven’t seen The Mandalorian yet, here’s what you need to know. In the show’s first episode, we learn that the main character (an anonymous bounty hunter played by Pedro Pascal) has been hired to find and retrieve a baby from the same green furry species as Yoda. Then, in Episode 2, it turns out this baby Yoda can already use the Force.

Meanwhile, one fan spotted an interesting detail about the scientist who’s working with Werner Herzog. His outfit sports the same emblem seen on all the Jango Fett clones on Kamino back in the Star Wars prequels, which seems like pretty clear proof that he’s a cloner with his sights set on the Yoda baby.

It seems likely that this scientist simply wants to clone the Yoda baby and create more Force-sensitive creatures. However, it’s also possible that his plan could be more complicated.

In the non-canonical Star Wars Legends universe, the Empire banned any and all research into midi-chlorians but allowed some top-secret research into the cloning of Force-sensitive creatures and how the process affected their midi-chlorian levels. This facility was controlled by Grand Admiral Thrawn, who was recently brought back into the Star Wars canon in a series of new books starting in 2017. So it’s possible some of that research happened in the current Star Wars canon. The scientist from The Mandalorian could even be from Thrawn’s secret cloning facility.

What does this mean? Well, if the scientist’s plan is to clone the Yoda baby or harness its midi-chlorians and give them to some other clone, that means there could be another powerful Force-user out somewhere in the galaxy with Yoda species DNA, potentially making it one of the most powerful beings around.

Sure, a lot of this is a stretch, but with Rey’s origins still a big mystery, and all the evidence suggesting The Rise of Skywalker will retcon her backstory in some way, this could be as good an explanation as any other. At the very least, The Mandalorian seems to be subtly reminding us that cloning is a key theme in the Star Wars franchise just ahead of Episode IX’s release. And that can’t just be a coincidence, can it?

The Mandalorian airs Fridays on Disney+. The Rise of Skywalker hits theaters on December 20.

More like this
Entertainment
5.17.2022 4:26 PM
Ahsoka will be different from The Mandalorian in one important way
By Alex Welch
Entertainment
5.16.2022 11:00 AM
20 years ago, the most underrated Star Wars movie changed canon forever
By Ryan Britt
Entertainment
5.21.2022 12:00 PM
The Acolyte timeline hints at how it could change Sith history
By Dais Johnston
Related Tags
Share: