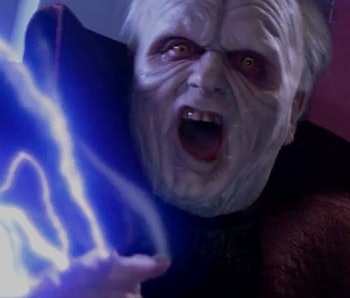 Emperor Palpatine is back in Star Wars: The Rise of Skywalker, and there’s a pretty good chance he’s going to Force lightning the heck out of someone before the final movie in the Skywalker saga ends. We still don’t know how that will all play out, but a hidden detail spotted in the Episode IX trailer could confirm some major leaks about Palpatine’s plan to resurrect himself and what he does once he’s back at full power.

Warning! Possible major spoilers for Star Wars: The Rise of Skywalker below.

It’s been a while, so let’s rundown those leaks real quick. Multiple reports from Making Star Wars and the Star Wars Leaks subreddit have claimed that Palps’ evil plan involves bringing Rey and Kylo Ren together as some sort of “dyad” and then harnessing the power that unleashes to recharge himself. Immediately afterward, Palpy allegedly shoots a massive Force lightning blast into the sky above him where Resistance and First Order spaceships are battling it out, potentially disabling a bunch of the good guys’ ships in the process.

Is any of this true? Well, it’s complicated. The “dyad” rumors were recently downplayed, with the same leakers claiming that plotline was cut from the final version of The Rise of Skywalker. However, leaked screenshots from the movie that looked extremely real seemed to confirm that Palpatine would indeed shoot a Force lightning blast into the sky while Rey looked on in shock. So at least part of this may still be accurate.

That’s where the trailer comes in. As on fan on Reddit notes, a closer look at one particular moment in the Episode IX trailer seems to show that space battle playing out as a blast of lightning crosses the right side of screen, and it looks like that lightning could be shooting upward.

This seems like pretty clear confirmation that someone is blasting Force lightning in Episode IX. And the only culprit we can think of is Emperor Palpatine — though recent developments in the Star Wars galaxy hint at one other character capable of harnessing Force lightning.

Regardless, this hidden detail in the Rise of Skywalker trailer seems to confirm that Palps will be back at full strength. Whether that involves creating a Force dyad with Rey and Kylo or some other evil plan is still a mystery, but the bigger question we should be asking is how our heroes will take down the Emperor after he’s returned to “unlimited power” status once more.

Star Wars: The Rise of Palpy Skywalker blasts into theaters on December 20.