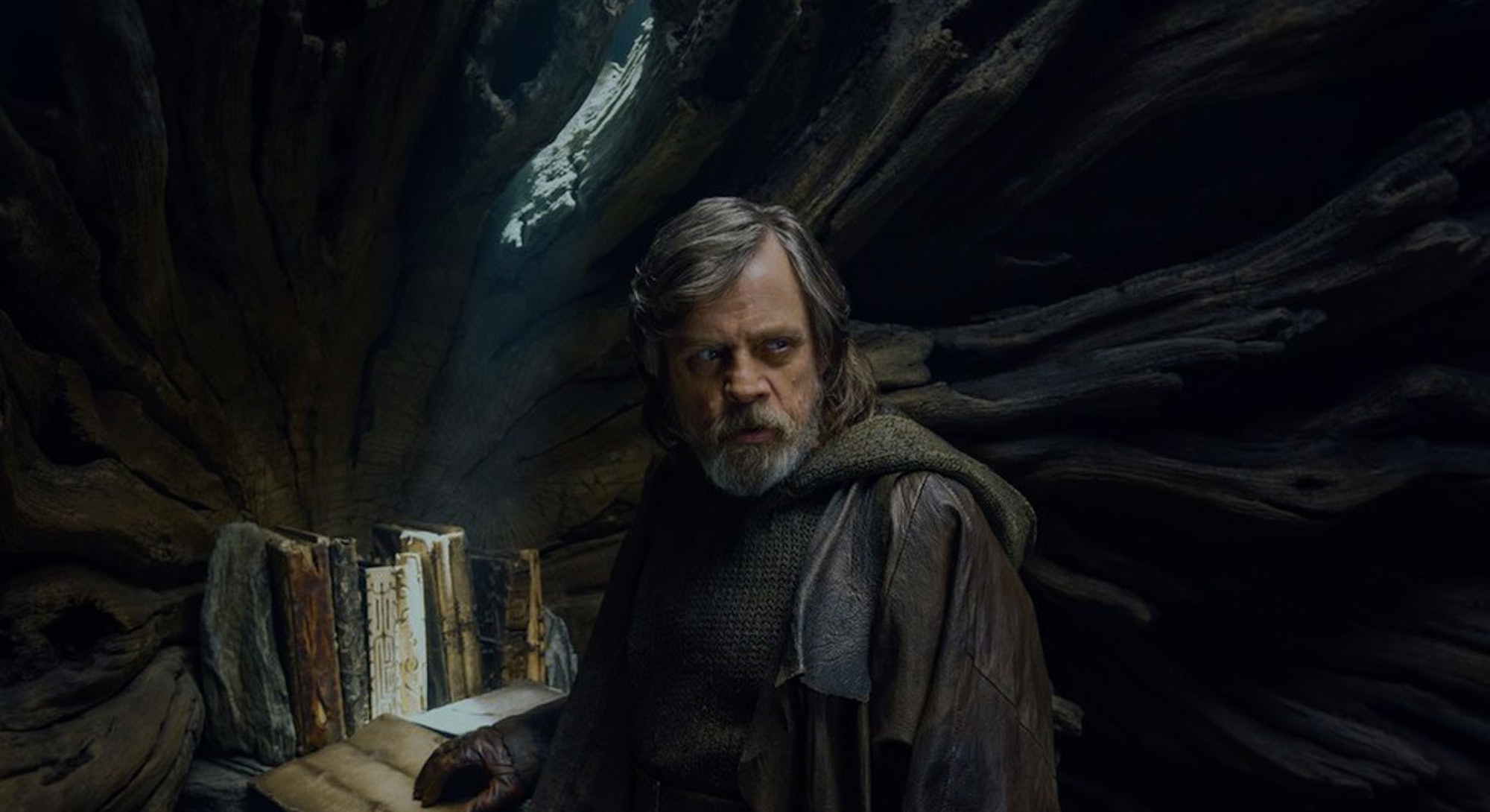 There’s seemingly a book burning in the new Star Wars movie, but it’s not done by the First Order, the successor to Darth Vader’s Empire. No, one of the most eye-opening moments in The Last Jedi doesn’t involve Stormtroopers, it’s not about Rey, Kylo Ren, or even Master Skywalker. It’s about an unexpected addition to the Star Wars universe: actual, physical, books made of paper.

So, what’s the deal? Can Luke Skywalker read after all? The answer is more complicated than it might seem…

I wrote in 2012 about illiteracy in Star Wars, and later expanded the idea in a book, Luke Skywalker Can’t Read and Other Geeky Truths. Essentially, no one in Star Wars seems to have any idea what’s going on with the current events of their universe; there are are no journalists to speak of, and as such, there are huge information gaps, as the written word has fallen out of use (interestingly, holographic messages as common as email). Star Wars seems to have a pervasive functional illiteracy across the majority of its lower-income population, i.e. young Luke Skywalker in A New Hope.

People like Luke could read a some, but only when the information served a utility, like when R2-D2 sends messages to his X-Wing screen. Luke’s literacy doesn’t go much beyond that.

Star Wars seemed to have a pervasive functional illiteracy across the majority of its lower-income population, i.e. Luke Skywalker.

There weren’t books on-screen any part of the movies, but that changed with the books in The Last Jedi. There were books, of course, the fictional alphabet of Star Wars is called Aurebesh, and rich people like Leia can likely read it. The point was that by the time we catch-up to the “present” of this fictional galaxy, the printed word just isn’t around. The proof is found in the widespread ignorance that allows Palpatine to rise to power so easily, and for Luke to become a myth in a mere 30 years. It follows that if the printed word in Star Wars disappeared centuries before any of the films, then that means any actual printed books in this galaxy must be really old.

And now, with The Last Jedi, that theory has come to pass. Books in Star Wars are ancient. And this was corroborated by none other than Rian Johnson himself.

“I wanted, a physical representation of this idea. Something that could represent to Luke, the seeds of the past.” — Rian Johnson

The director of The Last Jedi explains the books as “a necessity of the story” about Luke’s seclusion on an island — which is actually in Ireland — as he hits middle age.

“I wanted a physical representation of this idea…something that could represent to Luke, the seeds of the past, in terms of the Jedi Order,” Johsnon tells Inverse. “Something that felt old and that felt ancient and that felt very earthy and of the island. That was the whole idea with the design of everything on the island, including the Jedi temple.

“Let’s see as far back in history as we can push this. So, the early designs had big elaborate stonework and were intricately designed, and I said, ‘no, no let’s push it way, way back. Think, carved caves. So it made sense to say, let’s go back to books.’”

Books in the Star Wars galaxy don’t really have an antique analogy in our own culture. The closest comparison might be that Luke sees the ancient Jedi texts the same way we might view cave paintings now. Or, maybe, these crusty tomes are more like 8-track tapes are to a millennial today. Luke knows what they are, but does he have a way of accessing the information? Can Luke read the books in The Last Jedi?

To me, the answer is yes, he probably can. But, the result is the same as if he couldn’t, and that’s because he didn’t read those books.

When the spirit of Master Yoda appears to Luke in The Last Jedi, the little green guy seems to imply “young Skywalker” did not read the books in this little library, or at the very least, didn’t finish them. Yoda jokingly forgives Luke for this because he thinks these books sucked. “Page-turners they were not,” Yoda says, right after conjuring a lighting bolt to burn down the miniature library. That’s right. Master Yoda appears to perpetuate a book burning in The Last Jedi. For the purposes of the story, we’re led to believe that Yoda does this because he’s making a point to Luke about the legacy of the Jedi. There’s nothing in those books that Luke didn’t already know.

I was wrong when I declared, “Luke Skywalker can’t read.” What’s true is that he doesn’t want to read. The scene of Luke and Yoda burning the Jedi library is fine within the context of The Last Jedi, but on first viewing, it scans as little troublesome: Two of the wisest characters in Star Wars are okay with burning the only existing written record of the Jedi because the books, because, “page-turners they were not?” It seems off-brand for a Jedi.

At best, it’s a diss against long-winded prose. At worst, it mocks reading as a meaningful activity that can enrich people’s lives.

If there ever was a reason for Harrison Ford to return to this franchise, it would have been in this scene, rushing on screen not as Han Solo, but as Indiana Jones, chastising Luke and Yoda with his heroically nerdy battle cry “those belong in a museum!”

Obviously, Rian Johnson, Mark Hamill, and Yoda puppet master Frank Oz are intelligent, well-read and highly literate. But, the galaxy of Star Wars still seems to rebel against the idea of books, even when books finally are given the spotlight. Still, there might be a counter-mythology — plus a last-minute plot twist — allowing us to let Yoda and Luke off the anti-literacy hook.

Everything we see Luke do after this scene suggests he and Yoda believe in the oral tradition. They may believe the written word can be used to oppress the downtrodden, which means the only way to spread myths is the old fashion way, through word of mouth.

In The Last Jedi, Luke Skywalker becomes a folk hero, not merely the subject of a fairy tale. The distinction is important. In Breaking the Magic Spell: Radical Theories of Folk & Fairy Tales, Jack Zipes argues that the difference between a folk tale and a fairy tale is that folk tales are created and disseminated orally by “the people” while fairy tales are the things printed, sold and homogenized by the aristocracy in order to keep the people down.

“Once folklore is mediated it loses the folk aspect,” Zipes writes. “In the case of the folk tale, its mediate form is the fairy tale, and its context is the culture industry.”

As a phenomenon, Star Wars itself is part of the culture industry. This is a no-brainer, and probably why The New Yorker’s Richard Brody’s writes in his review of the film this: “The Last Jedi is a story about the Resistance, but the film itself is a cinematic masterwork of the First Order.”

We know Star Wars films are manufactured tales of ordinary people (the folk) fighting back against the oppressive machine, but that the films themselves are still created by some kind of machine.

And yet, The Last Jedi pushes back against some of the bourgeois trappings of the other films. The truth at the center of the movie reveals itself when Luke Skywalker actively employs the oral tradition of storytelling as his primary weapon against the First Order.

When I asked Johnson how news travels in the Star Wars galaxy, he described it as a “game of telephone,” in which people orally tell each other stories which become legends. (So, again, no journalists, not even state-run media.)

In defense of Luke and Yoda’s library-burning, they do live in a regressive galactic culture. The sheer amount of ignorance and disenfranchisement can’t be fixed by the two of them getting book deals and releasing their tell-all memoirs to the public. Most of the people we see on backwater planets probably can’t read anyway, and so, giving them material for an inspiring campfire story is probably the best way to inspire hope. And to get those campfire stories started, Luke and Yoda provided the only kindling they had available; the last Jedi books in the universe.

But, of course, there’s another page to this story: Many fans are reporting that upon repeated viewings, it’s pretty clear the books are safely stored in a locker on the Millennium Falcon, meaning Rey stole the books before Luke had a chance to burn the library. This all implies that Yoda’s in on the joke, and his line “there is nothing in there that the girl does not already possess” is actually meant to be taken literally.

Did Yoda know Rey stole the books and then burned down an empty library? If it’s true, this gives everyone more reason to like Rey more than we already do. Unlike her masters, she may actually enjoy long, in-depth books, knowing that just the act of turning the pages and sighing might be enough to change the world.

Star Wars: The Last Jedi is out in wide release now.