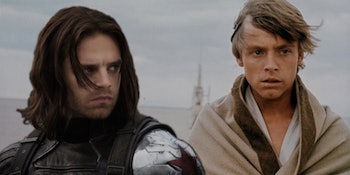 Maybe Sebastian Stan just wants to be the hero for once. The 35-year-old actor, best known for his role as Bucky Barnes’s Winter Soldier in the Marvel Cinematic Universe, recently confirmed that he’d be down to play famed farmboy turned Jedi Knight Luke Skywalker in a future Star Wars film. And while this casting might seem like nothing more than fandom mashup gobbledygook to the untrained eye, the “Sebastian Stan looks like young Mark Hamill” train has been chugging along for longer than you probably realize.

Stan made an appearance during Rhode Island Comic-Con at the beginning of November and answered a fan’s question about whether or not he’d ever be interested in playing a young Luke Skywalker in a Star Wars film.

“I just want to say here that anytime anyone would like to call me and ask me about Luke Skywalker, I’d be very happy,” Stan said.

Fans, especially the hordes of people who glommed onto Stan after he premiered as Bucky Barnes in Captain America: The First Avenger and as the Winter Soldier in Captain America: Winter Soldier, have noted that Stan doesn’t not look like a young Hamill. In fact, the longer you stare at Stan the more he begins to resemble Hamill; give Stan some sandy blond hair and his square jaw, blue eyes, dimpled chin, and heavy brow do the rest of the work for you.

And Stan’s dream isn’t totally unrealistic, either. Both Lucasfilm and Marvel Studios are owned by Disney and Stan already sold his soul by signing a nine-film contract, locking himself in for nine appearances as Bucky Barnes in the MCU. While Stan will most likely be a bit bogged down by his metal arm for a while, maybe his schedule will open up.

Lucasfilm doesn’t seem to be putting a stop to its blockbuster schedule any time soon given that it recently announced a new trilogy from Star Wars: The Last Jedi director Rian Johnson. And considering that Han Solo is getting his standalone film, the appropriately named Solo: A Star Wars Story, why wouldn’t Luke also get one? Something post-Star Wars: Return of the Jedi and pre-Star Wars: The Force Awakens would actually be perfect.

The best part of all this? Hamill is in on it, too.

Ever the troll, Hamill took to Twitter in December to poke fun at the comparison, starting up the hashtag #MySonSebastian. This innocent joke kind of totally lit the internet on fire, especially on fan-driven sites such as Tumblr.

Before that, though, Instagram user morphy_me famously photoshopped Stan’s face onto a headshot of young Hamill in character as Luke back in May 2016.

The likeness is… kind of terrifying, to be honest.

Luke Skywalker, canonically, has had a clone in the past. Is Stan Skywalker’s IRL clone? Or maybe this is just the universe’s way of telling Lucasfilm it needs to get on a Luke Skywalker standalone film sooner than it was originally anticipating.