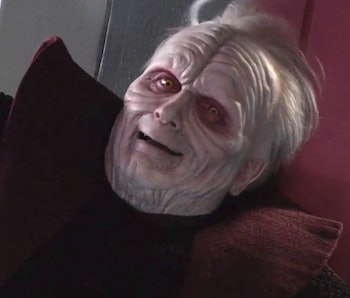 This is an exciting time to be a Clone Wars fan. The series may have ended mere days ago, but with The Mandalorian Season 2 on the horizon including Ahsoka Tano, the story is far from over. However, the sheer number of Jedi casualties in Revenge of the Sith may have cut the opportunity for more cameos like this one, but hope still remains in this theory that could allow an iconic prequels Jedi to return to screens once again.

Redditor wren620 builds upon a previous theory from another user, shahkabra, adding new points gleaned from the latest Clone Wars episodes. Shahkabra claims the three actions used to kill Mace Windu aren't enough to kill him: Anakin Skywalker sliced off his arm, Darth Sidious struck him with Force Lightning, and pushed him out the window. Losing a limb is practically a rite of passage for Jedi, considering the number of times we've seen it on screen. Force lightning alone isn't powerful enough to kill. That leaves one last deadly force: fall damage.

The newer theory from wren620 includes some pretty undeniable examples that Jedi can survive falls from a great height, mostly drawn from the ninth episode of Clone Wars Season 7. The clip shows Ahsoka practically leapfrogging from ship to ship before falling a vast distance and landing on solid ground without so much as a bruise. You can see that scene below:

Ahsoka falls from the sky and lands just fine, so who's to say that Mace Windu couldn't have done the same in Coruscant? People fall from great heights in Star Wars all the time. This would free him to return to the franchise in some capacity, perhaps even returning to The Mandalorian aside his fellow Jedi.

Like any theory, there's some evidence suggesting it's false. After all, Rey heard Mace's voice in her head alongside countless other dead Jedi during The Rise of Skywalker. But by that point, he would have been more than 100 years old. It's still a possibility that he died of old age after surviving the fall. He would have known Order 66 was coming and had no choice but to go into hiding, wounded from his duel with Palpatine.

If the theory is true, when would we be most likely to see Mace Windu again? He would be too old to appear in any continuations, but there's one glaring part of Jedi history he could participate in: the Rebellion. Mace was born about 70 years before the events of A New Hope, putting him in the same Elder Jedi role as Obi-Wan Kenobi. Perhaps in a future series or film he could provide guidance to a section of the Rebellion? Only time, and Samuel L. Jackson's busy schedule, will tell.

Seasons 1-7 of The Clone Wars are streaming now on Disney+.