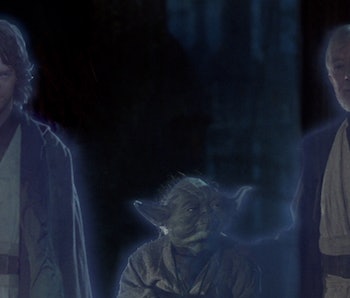 Rey has some serious backup in The Rise of Skywalker, and if you’ve loved Star Wars at any point in your life, this is the moment you’ve been waiting for. In the trailers for the movie, Luke said “A thousand generations live in you now,” and it turns out he really wasn’t kidding. But what did this game-changing scene really mean? And just who did we hear from?

This moment happens near the end of the movie, but it isn’t until the very end of the credits that we get confirmation exactly who all those voice acting cameos in Star Wars: The Rise of Skywalker really are. It’s as close to a post-credits scene as this movie gets, but if you missed it, we’re here to explain exactly who turned up and what it all means.

Spoilers ahead for The Rise of Skywalker.

So, though the pep squad of past Jedi scans a little like a deus ex machina, Rey was trying to get in touch with them from the start of the movie. She repeated the refrain “be with me” throughout the story. At the beginning, it didn’t work, but at the end, all those Jedi came through.

Perhaps Leia knew contacting the Jedi spirits was pretty much the last secret weapon left in Rey’s arsenal. Or maybe Leia saw it was important for the ghost Jedi to accept Rey since, you know, her grandfather ordered a straight-up genocide on the every single Jedi in Revenge of the Sith.

Anyway, if you want to complain about the voices of the Jedi being fan service, I’m not here to talk about that. Here’s why this scene matters and what it means in the context of the Star Wars universe.

Who were all those Jedi?

Okay, first up, let’s break-down just who we hear from. Luke and Leia are obvious, but who else?

In addition to Luke and Leia, here’s a list of Jedi who are identified in the credits:

Nearly all these Jedi are from the prequel trilogy. Aayla Secura — killed in Revenge of the Sith — didn’t even have speaking lines until she appeared in animated form in The Clone Wars. What’s more, for the first time, two Jedi from the animated shows, Ahsoka and Kanan, “appear” in a live-action Star Wars movie, voiced here by Ashley Eckstein and Freddie Prinze Jr. This is pretty cool, not just because these are cartoon characters come to life, but because these Jedi now feel more wholly included in Star Wars canon.

What did each Rise of Skywalker voice cameo tell us?

Kanan died in the final season of Rebels, which happens before A New Hope, so it makes sense Kanan is a ghost. Ahsoka’s presence as a Force ghost is really interesting for two reasons. One, she was still alive at the end of Rebels, which had a flash-forward taking place just a little bit after the Battle of Endor in Return of the Jedi. Second, after the fifth season of The Clone Wars, Ahsoka wasn’t technically a Jedi and didn’t identify as such. So this voice cameo tells us that Ahsoka reclaimed her Jedi identity at some point — and then died.

Mace Windu, Qui-Gon Jinn, Luminara Unduli, Adi Gallia and Aayla Secura represent the hardcore canon prequel Jedi, which gestures at the larger legacy of the order. After all, 1,000 generations is a lot, and Mace Windu and Qui-Gon aren’t that much older than Rey in the grand scheme of things. (Note: the vast majority of Jedi in this scene, in general, played by their respective voice actors from the animated series The Clone Wars and Rebels.

The point is, even random prequel Jedi like Aayla Secura should really make us think that, yes, Rey probably had the spirits of even older Jedi helping her out, too. We just recognized the voices of the folks we recognized, and several others were in Rey’s head. At least, that’s my headcanon.

Just like in The Force Awakens, Ewan McGregor is back as the voice of Obi-Wan Kenobi, though it seems like some Alec Guinness voice-layering happened here, too. Either way, McGregor is totally convincing as the elder Kenobi.

Then there’s Anakin. He says, “Bring back the balance Rey, as I did.” Though Anakin was the original Chosen One, it seems that Rey is a new Chosen One. Or, from a certain point of view, Anakin is still the Chosen One and Rey is just kind of doing his dirty work. (Right?)

This one is fairly obvious, but other than Yoda, Luke and Leia are kind of Rey’s biggest fans. In fact, you could say, that when you add up the voices of Qui-Gon, Obi-Wan, Yoda, Luke and Leia, what you see is a bunch of people who are total suckers for believing in a lost cause. Leia and Luke were cursed by their heritage of being Darth Vader’s kids. Rey was kind of cursed by the fact that Palpatine was her grandfather. All of this makes Luke and Leia the perfect people to believe in Rey and the Jedi. They really can see it from all sides.

What do all those Jedi voices mean for Star Wars?

The most fun way to read this scene is literally: that Rey, for that moment, literally becomes ALL THE JEDI EVER. We could argue that this is silly, but it does make a little bit of sense if you think about it in one specific way. Earlier in the film, it’s clear that if Rey kills the Emperor out of hatred, then she’s acting only for herself and her own vengeance, which will lead to the Dark Side. If she’s the physical embodiment of all the Jedi, then she’s opened herself up to things beyond herself and her own need for revenge.

Basically Rey knew letting all that power flow through her would kill her, but sacrifice was the only way to beat the Emperor. This actually dovetails pretty well with Darth Vader killing the Emperor (the first time?) in Return of the Jedi. If Luke had killed the Emperor out of hate, it would have accomplished nothing. But, Vader destroyed the Emperor out of love for his son. This is pretty much the same thing with Rey, on a broader scale. She takes out the Emperor, knowing she’ll die, because she wants to save everyone she loves, which, on some level is the entire galaxy.

Star Wars has always loved martyrs, and with Rey Skywalker and Ben Solo, we kind of got two for one. But, the real question is: now that Rey has brought peace to the galaxy, are the Star Wars really over?

The Rise of Skywalker is out now in theaters everywhere.