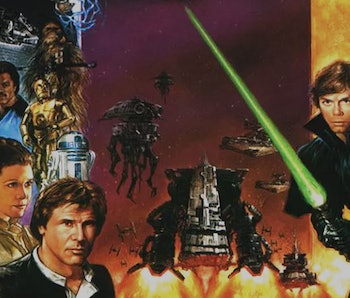 Doing your Star Wars homework before the release of Star Wars: The Rise of Skywalker isn’t all that hard. All you have to do is watch all eight of the existing episodic Skywalker films, right? That’s easy enough to do on Disney+, although The Last Jedi is still on Netflix at the moment. But what other arcane Star Wars knowledge might be useful? There’s a whole other world of comics, novels and spinoff shows out there, which we’ve distilled down to some bite-sized chnks. Here’s a quick guide to some last-minute Star Wars stuff to consume on the eve of Episode IX.

No Spoilers for The Rise of Skywalker ahead. But some mild speculation.

The Emperor is back for the ending of Star Wars as we know it, but this already happened back in the early ‘90s, in the moody comic series called Dark Empire. There’s no telling how similar Palpatine’s return will be to this old-school comic, but it should be a fun read ahead of time, just in case all kinds of stuff is really similar. Bonus: Goth Luke!

Chronologically, the last time we saw Ian McDiarmid was in Episode VI: Return of the Jedi. However, what you probably didn’t know is that the most recent time Ian McDiarmid appeared Star Wars canon as Emperor Palpatine was in season 4 of Rebels in 2018.

Watch it here on Disney+.

The Force Awakens and The Last Jedi take place back to back. But, that’s not the case with The Rise of Skywalker. This time out, there’s a year-long gap in the action, during which time Leia and the Resistance get their mojo back. So what happened during that period? And how did Wedge Antilles decide to rejoin this new version of the Rebellion?

The Rebecca Roanhorse canon novel Resistance Reborn is essential reading before The Rise of Skywalker. It’s definitely worth paging through while you’re waiting in line for the big finish.

If you want to get an extra dose of Palpatine lore ahead of his creepy comeback in Rise of Skywalker, one Clone Wars episode rises above the rest. In “The Lawless,” Darth Sidious decides he’s had enough of Darth Maul and his brother (Savage Oppress) running their little crime synidcate on Mandalore. So, Sidious decides he’s going to deal with them, personally.

Watch it here on Disney+

Who was Snoke? Or, more accurately, who did Kylo Ren think Snoke was? The Rise of Skywalker is poised to throw a major twist into the late Supreme Leader’s backstory, but before that, there’s a canon comic that explored exactly how Snoke trained Ben Solo in the ways of the dark side. It doesn’t get any more legit than this, and if you still have questions about Snoke after The Rise of Skywalker, there’s a good bet those answers are addressed, or at least alluded to in this Rise of Skywalker prequel.

Star Wars: The Rise of Skywalker is out everywhere on Friday, December 20, 2019.