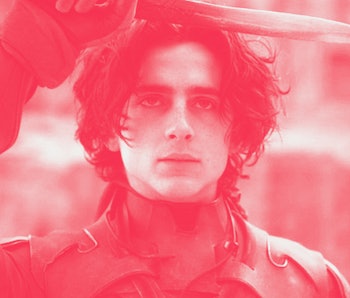 The sands of fortune are shifting. Now that Denis Villeneuve's cinematic version of Dune will debut in theaters and on HBO Max on October 1, 2021, the director himself is worried about an early death for the fledgling franchise. Like Christopher Nolan, Villeneuve is furious that dropping Dune onto streaming at the same time it hits theaters means "Dune won’t have the chance to perform financially," meaning Warner "might have just killed the Dune franchise."

But, is Villeneuve right? Are hypothetical sequels to Dune only possible if the new film becomes a box office hit? If we look at the historical track record of other movies called "Dune," this might not actually be true. Villeneuve is a visionary director who made Arrival and Blade Runner 2049, but the latter had no Covid-19 pandemic, little competition, Harrison Ford and Ryan Gosling looking fly, and still managed to be a massive box office bomb. In other words, maybe we don't want to see what kind of money Dune would make in a traditional box office setting. In fact, maybe the future of Dune sequels relies on a hypothetical direct-to-streaming show, whether Villeneuve likes it or not.

Here's why a Game of Thrones-style direct-to-streaming Dune show is probably the best hope for any direct sequels to the new epic movie.

In numerous interviews, Villeneuve has indicated he always wanted to split Frank Herbert's first Dune novel into two movies, saying in April 2020, "I would not agree to make this adaptation of the book with one single movie." This means Dune fans and Villeneuve should, naturally, want a sequel to the upcoming movie, because the first film likely won't even cover all the events of the first novel. When Villeneuve talks about the premature death of the Dune franchise, it seems like that means he's worried he won't even get to finish adapting the book.

Dune 2021 in theaters was always a gamble

Anyone who follows the history of science fiction cinemas can tell you a familiar story: a movie with a huge budget, tons of hype, and great talent releases to mixed reviews, makes little money, and eventually becomes a "cult classic." We're talking about Flash Gordon in 1980, John Carter in 2011, and yes, both the David Lynch Dune and the never-released Jodorowsky version of Dune. Regardless of how we feel about the objective quality of any of those movies or the potential artistic merit of Villeneuve's Dune, this isn't a Rise of Skywalker situation where the movie will just make a ton of money regardless of what people think about it.

Dune is in a zeitgeist deficit, to begin with. As a true Dune fan, I know this deep down. The novels are not mainstream, and the story of the novels doesn't really have the kind of "good triumphs over evil" type of narrative that goes down easy with a mass audience. It's possible that Dune could become like Lord of the Rings and leap from cult status to mainstream hit overnight, but the earnestness and darkness of the story may just as easily prevent that.

Yes, the movie has star power, yes, the trailer got an overwhelmingly positive response, and yes, the movie looks good. But again, so did Blade Runner 2049. People who like sci-fi and good movies might have enjoyed that film, and there's a good bet they'll like Dune, too. But hardcore fans aren't enough to make something into a box office hit. You need the disinterred public-at-large to do that.

Imagine a Game of Thrones movie in 2009. That's right, you can't. Back before the George R.R. Martin novels become a household name thanks to HBO, the notion of big, successful fantasy films was limited to exceptions that proved the rule. If Game of Thrones only had one shot to prove itself as a box office titan, it seems very possible such a film could have been remembered as fondly as say, I dunno, The Wrath of the Titans. Because it was complex and had a lot of characters, doing Game of Thrones as a TV series was ideal. Regardless of how you feel about the outcome, this was really the only way for these novels to go mainstream, a slow-burn TV show that gains a following over time.

Or think of it another way. Dune might be Warner's answer to big Star Wars movies, but for HBO Max to compete with the likes of Disney+, it needs its Mandalorian. A Dune TV show could fill that role and keep subscribers sticking around even after theaters re-open.

Right now, this seems like the best way forward for sequels after Dune hits in 2021. If Warner Bros finds an audience on HBO Max and decides to treat the like a pilot episode of a huge TV series, then there might be some hope. There's a lot of Dune beyond the first book. And because the sequels to Dune end up spanning thousands of years beyond the events of the first couple, you don't need anyone from the cast of the upcoming movie to sign-up for a sequel TV series.

That is, other than Jason Momoa. Duncan Idaho does return in all the other Dune books, but as a weird clone of himself. So, if we think about this rationally, all we really need for a Dune TV series is for HBO to convince Jason Momoa to sign-up for a new TV series.

Dune will be released in theaters and on HBO Max on October 1, 2021.

More like this
Entertainment
Jan. 19, 2023
Ant-Man 3 interview proves Marvel is taking the wrong lesson from Jodorowsky’s Dune
By Ryan Britt
Entertainment
Jan. 13, 2023
Foundation Season 2 could fix the worst thing about the Isaac Asimov books
By Ryan Britt
Culture
Jan. 27, 2023
The Master was called a movie about Scientology, but it’s about so much more
By Dais Johnston
LEARN SOMETHING NEW EVERY DAY.
Related Tags
Share: