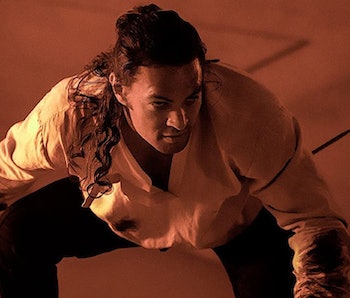 Right now, if you think of Jason Momoa, you probably think of him bearded and holding a trident as Aquaman. But when the first round of photos from Denis Villeneuve's Dune hit in April 2020, one thing the internet could not stop talking about was an unbearded Jason Momoa. Perhaps it's time to get used to a clean-shaven Jason Momoa. Because after Dune 2020, you may only be thinking of him as Duncan Idaho. Spoilers for Frank Herbert's Dune books ahead.

In the first Dune novel by Frank Herbert, Duncan is totally the biggest badass in House Atreides. He's an expert swordsman and — depending on how the new film approaches the character — he might have a scene to rival that moment when Boromir (Sean Bean) gets hit with all those arrows in Fellowship of the Ring. Let's just say Duncan can and will fight people to the death, and in a situation like that, he's going to take out a lot of his enemies.

In recent interviews, Momoa likens Duncan to Han Solo, which isn't a perfect analogy, and the combination of sexiness and badassery are only part of why Duncan might steal the show in Dune. The other part is the simple fact that Duncan is the only character in the first Dune novel that appears in the subsequent installments. This is why Momoa is kind of the Obi-Wan here, in the sense that his presence exists past the first Dune in a way that elevates the character beyond just being the "Han Solo."

Okay, book spoiler time. Duncan dies in Dune. Whether this means he'll die in the first Villeneuve Dune film is unclear. Since the first new film only covers part of the first book, Duncan might not die. That said, we don't know how Villeneuve and his team are structuring the new Dune, so this could death could happen at a time we don't expect. But, in any faithful version of Dune, Duncan will die. And then... come back to life.

Well, not exactly. But, in Dune Messiah Duncan returns as a quasi-clone of himself called a "ghola." That's just the beginning of a journey that lasts at least 3,500 years. By the end of the book series, Duncan becomes a "serial ghola," meaning multiple versions of him exist over the centuries.

Think of it sort of like Doctor Who, only the character continues to look like himself after regenerating into a new body. (This analogy also would require someone else to create the Doctor's regeneration, but you get it.) The larger point is this: Duncan is a minor character in the first novel, but a major character throughout the book series. If there's even a hint that there will be more Dunes beyond the 2020 film (or, in my prayers, a TV show) it makes sense to resurrect Momoa as Duncan.

If Duncan Idaho returns in future Dunes, or if his resurrection is hinted at in Dune 2020 (maybe a post-credit scene) the character could become bigger than just this movie. In the larger cultural perception, this could make Duncan Idaho the opposite of Momoa's Khal Drogo.

In the universe of Dune, immorality isn't common, and when people do live longer than normal — like Duncan or Paul's son, Leto II — they're essentially not the same person they were before. But the important thing about Duncan is that in all of his incarnations, he's likable, heroic and compelling. Momoa has the right kind of confident charm to play Duncan in the first Dune. But, if Villeneuve is smart, this is only the beginning of Momoa's reign in the Dune universe. You might feel like Dune is the Paul Atreides show, but if this spice train keeps flowing, it's going to be the Duncan Idaho show before too long.

Dune comes to theaters in December.