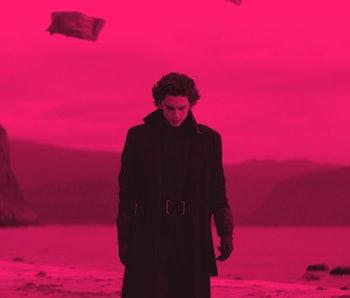 Two kinds of people are excited about the new Dune movie: those ready for a sprawling sci-fi epic directed by Denis Villeneuve, and people who just really like Dune. The truth is, there are far more people in the first category than the second. The fame of the Frank Herbert books is still mostly contained within the niches of science fiction and fantasy subcultures. You can argue that SFF went mainstream a long time ago (which I often do) but the fact is more people have heard of Dune than have read Dune, or seen any of the previous adaptations.

As a pop-culture phenomenon, right now, roughly half a year before the movie's December 18 release date, Dune is in the exact same position Lord of the Rings was in pre-2001. Before Peter Jackson's Fellowship of the Rings, the franchise was popular. But, it wasn't mainstream. We could be on the eve of that kind of metamorphosis for Dune. Who knows — by 2022 your mom might start quoting Bene Gesserit prophecy. Here's the case for why Dune could become the next Lord of the Rings.

Before the Peter Jackson Lord of the Rings movies, you never encountered references to the works of Tolkien on a daily basis. Dumbledore was a bigger deal than Gandalf. But after the Lord of the Rings trilogy, everything changed. Talking about the origins of the Ringwraiths, or the resurrection of Gandalf the White, or why the Orcs do anything at all, crossed over from Dungeons and Dragons gaming nights into bars, coffee shops, and your family's Thanksgiving table.

Nothing about the Jackson Lord of the Rings trilogy backs away from the baroque nerdiness of the books. If anything, what makes the films so cool and so watchable is the total commitment to bringing Tolkien's universe to life. The upcoming reboot LOTR show might end up eclipsing these films, but Middle-earth is mainstream because these movies changed the way the culture at large thought about really complicated fantasy movies. The mythology and world-building of LOTR weren't dumbed down, prompting countless new fans to explore the books so they could get more Elf action straight from the source.

Lord of the Rings changed everything

We tend to forget that new Star Wars movies were coming out around the same time as The Lord of the Rings movies. In 2002, The Two Towers hit theaters, the same year as Attack of the Clones and The Matrix Reloaded. Of these three films, I'd argue The Two Towers has aged best, and is probably more impactful on geek culture at large. (Remember how Karl Urban was in these movies? Remember how Hugo Weaving was in EVERYTHING back then?)

By 2003, The Return of the King won an Oscar for Best Picture, which, as everyone knew at the time, was basically an Oscar for all three movies. The Harry Potter books might have helped loosen up the mainstream for Lord of the Rings, but the Potter films had only just begun when Fellowship came out, and the books weren't even complete until four years after Return of the King hit theaters. The fantasy boom at the start of the 21st century is partly thanks to Potter, but adults took it seriously due to the popularity of Lord of the Rings.

To be clear, I'm not saying this universal love was correct or justified. I think it was mostly justified, but critics of the films correctly point out that the casts are hopelessly white and Jackson's attempts to correct the sexism of Tolkien's novels don't quite work. That said, the impact of the movies is undeniable. Before the movies, Lord of the Rings was a weird thing people talked about in dorm rooms. It wasn't cool.

The time is right for Dune

This is the perception of Dune right now. It's mostly a cult thing. Your average person only sort-of knows what Dune is. In John Hodgman’s most recent book, Medallion Status, he repeatedly mentions that the Dune phrase “Third Stage Guild Navigator” is something only hardcore nerds understand. In Russian Doll, saying "Jodorowsky's Dune," is a password that gets Nadia into a secret backroom. David Lynch, a legendary auteur, has publicly disowned his version of film over and over again.

Despite the hype, Dune is associated with obscure, inside-baseball genre fiction. It's not like Fifty Shades of Grey or The Hunger Games. It's also not really like Star Wars, even though people (including me) insist on that comparison, partially because there's a desert planet, and because it's fun to come up with wacky analogies. Sure, film nerds talk about the ill-fated Jodorowsky's Dune in reverent tones, and hardcore Dune fans point out that the 2000 Sci-Fi Channel miniseries isn't that bad. And surely, there's a subsection of Sting fans who love the Lynch movie because it was their introduction to Sting.

But that's it. Dune is not mainstream right now at all. Its popularity in terms of the average person is a lot like Lord of the Rings in the eighties or nineties. You either "got it" completely, or you had no idea what was going on. There was zero in-between. That's how you know when something goes mainstream. Casual fans suddenly exist. As of now, there are no casual fans of Dune. In 1999, that was true of LOTR, too.

How Dune can go mainstream

There are basically three things Dune 2020 has to do in order to become the next Lord of the Rings.

Villeneuve has a solid chance to fulfill the first two criteria, but the lackluster performance of the director's previous big-budget sci-fi outing, Blade Runner 2049, could be instructive. Blade Runner 2049 is generally well-liked by mainstream film critics and sci-fi people. Beyond that, most people don't care. Even casual fans have opinions about the deeply flawed Alien prequel Prometheus, where Blade Runner 2049's status in pop culture is more of a shoulder shrug. It's not quite popular enough to warrant debate, and not quite weird enough to have a massive cult following. This doesn't mean it's bad, but it's hard to make an argument for Blade Runner 2049 without also saying "it's really underrated." We only say this because few people actually saw it. I'm not making this up, the box office numbers were really bad, and keep in mind this movie had Harrison Ford in it and came out just two years after The Force Awakens.

So, what does that mean for Dune? Well, if you leave the pandemic out of it (which his hard to do, I know) it's sort of a crapshoot. Either the hype for Dune will work, and tons of people will be ready to see it. Or the hype won't work, because people don't really understand what it is.

It comes down to this: Will Dune be perceived as a mainstream film, or something that is only for hardcore sci-fi people? The pandemic and the eventual release date of the film will certainly impact this, but again, think about Blade Runner 2049. Before it came out, most sci-fi fans figured it would be a hit. But it wasn't.

That said, Dune is much bigger than Blade Runner 2049. Literally. There's a sequel that has been low-key confirmed (this film will apparently only cover half of the first book) and that means there's a potential for even more movies after that. I mean, there are six books in Herbert's first run alone, and let me tell you, they are wild.

But the world of Dune is also larger in its own universe. In some ways, the feudalism of this future might be just what fans of Game of Thrones have been longing for after the disappointing end of the HBO series. Unlike that series, the Dune books are done, meaning the writing doesn't have to suddenly become incongruous with its source material. If anything, the fact that Dune has been around for so long bodes well for its box office success. Because if Dune is a smashing success, the spice won't just flow in 2021, but perhaps forever.

More like this
Entertainment
5.12.2022 6:34 PM
The secret reason Christopher Walken was destined to play the Emperor in Dune: Part II
By Ryan Britt
Gaming
5.10.2022 8:17 PM
Everything we know about Lord of the Rings: Heroes of Middle-earth
By Robin Bea
Entertainment
5.11.2022 7:00 AM
Avatar 2 release date, cast, trailer, and plot for The Way of Water
By Mónica Marie Zorrilla
Related Tags
Share: