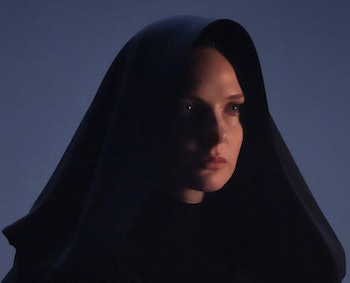 Although the new trailer for Denis Villeneuve's mostly references Frank Herbert's book, it also has some shout-outs to a version of Dune that was never actually made; the fabled 1970s adaptation of Dune from Alejandro Jodorowsky. There's one big Easter egg for Jodorowsky's Dune in the trailer and another, more tenuous reference.

Villeneuve is signaling clearly to longtime spice-addicts that his version is at least a little bit aware of the artistic cluster-cuss that was (is?) Jodorowsky's Dune. For film nerds and longtime Dune fans, this is cool. But is this actually good? In other words, do we want a new version of Dune that is in love with the Jodorowsky version that was never made? Speculation ahead.

In the novel Dune, both Duke Leto Atreides and the Baron Harkonnen are each obsessed with their own complex schemes. Early in the book, Leto tells his son Paul to watch out for "a feint within a feint within a feint...seemingly without end." This tunnel of endless references applies to how we talk about Dune, too.

On the off chance that people can get offended by spoilers for a documentary, I'll say this right now, I'm going to spoil aspects of the documentary Jodorowsky's Dune. Whether or not Jodorowsky ever actually read Dune is a matter of some debate, but in the documentary, he states outright that he hadn't read it when he first took on the project. This isn't to say he didn't eventually get around to reading it, but the documentary also makes it clear that his version of the film would have been wildly unfaithful to the novel.

In the documentary, we learn that in Jodorowsky's Dune would have ended with a semi-sentient version of the planet Arrakis, that actually decides to move through space to spread the soul of Paul Atreides. If you think Paul making it rain at the end of Lynch's version is reductive and silly, then the overall arc of Jodorowsky's Dune is borderline absurd. As the filmmaker admits in the documentary, "I rape Dune...but with love."

Now, whether or not you're okay with this analogy or not (I'm not!) the point is very clearly made, Jodorowsky's Dune would not have been even close to the story, or even the intent of the source material. Say what you will about Lynch's version, but at least he tried to hit the story beats (mostly) in the right places. The promise of Villeneuve's version, for longtime fans, is that we actually get to see Dune. The hope, for people who aren't already into Dune, is that the film will accurately explain why existing fans are so obsessed.

When it debuted, the Dune 2020 trailer was the number 1 video on YouTube, which is saying something for a movie based on a cult novel series that has yielded two legit adaptions that most fans consider to be "meh." But instead of referencing those adaptations, the new trailer references an alternate universe in which Jodorowsky's Dune is something that everyone is totally aware of.

Confused about the song that plays in the trailer? That's the Pink Floyd song "Eclipse," rearranged and seemingly re-recorded by composer Hans Zimmer. This references Jodorowsky's Dune because, in the '70s, Jodorowsky wanted Pink Floyd to do the soundtrack for his version of Dune. If you know this, then the message is clear: Villeneuve and Hans Zimmer dig Jodorowsky's Dune, or at the very least, are aware of it. As Star Trek: Picard showrunner Michael Chabon pointed out on his Instagram: "The allusion to #jodorowsky in the use of #pinkfloyd on the soundtrack is a sign that the filmmakers understand and even revel in their project’s history of broken dreams and dashed hopes—and feel those hopes and dreams have been fulfilled."

Chabon's point is well made: Including the Pink Floyd track in the soundtrack is a smart way of saying to the Dune fans that this film is going to try and make your dreams come true. No matter what you think of the plot of Jodorowsky's Dune, the documentary makes a few things clear: It would have looked amazing. And, as anyone in the Jodorowsky's Dune camp will tell you, the artists Chris Foss and H.R. Giger were recruited by Jodorowsky for his Dune. This means we wouldn't have had Alien had Jodorowsky Dune not failed. Those "broken dreams" of Jodorowsky's Dune created the world we live in. The artist Jean Giraud (AKA "Moebius") created amazing concept art and storyboards for Jodorowsky's Dune, and at the end of the new Dune trailer, you could argue that one of his sketches influenced the final show we see of the sandworm and a few people standing in front of it. (That's the second, more subtle Easter egg, maybe.)

But here's the thing. I like the pop-culture world that resulted in H.R. Giger working on Alien. Relative to Dune adaptations, I'm not convinced we live in the wrong timeline. If you leave the beauty of the concept of art from Jodorowsky's Dune aside, then all that documentary does is convince a fan of the books that this film would have messed-up the book. For some cinephiles, there's a whole genre of unmade movies that creates breathless debates in which people can say absurd things like "this [insert any movie that wasn't made] was the greatest movie NEVER made."

The thing is, whenever this kind of claim is made — from Tim Burton's Superman to Colin Trevorrow's Star Wars: Episode IX — it's hard to really know for sure that what you're advocating for would have actually been good. And as someone who believed, as a teenager that the 2000 Sci-Fi Channel version of Dune was the definitive filmed version, I have a hard time believing that Jodorowsky's Dune would have been the masterpiece that many film critics would have you believe. Yes, it looked cool, but the concept art for The Phantom Menace looks amazing, too, and I think we can all agree that film is less-than-stellar. In Russian Doll, the code phrase "Jodorowsky's Dune" gets Nadia (Natasha Lyonne) into a secret backroom behind a bar. For those who aren't sold on the imagined perfection of Jodorowsky's Dune, this feels like the perfect metaphor. And oddly, by using the Pink Floyd track in the trailer, Zimmer and Villeneuve are (briefly) throwing open that dark backroom, and reminding fans that they too, know the password.

In fairness, there's every reason to believe that sometimes an Easter egg is just an Easter egg. The use of Pink Floyd in the trailer can reference Jodorowsky's Dune without acquiring any of the baggage. And until the movie comes out, we won't really know. Let's just hope that the Arrakis doesn't end-up as a mobile planet imbued with the soul of Paul Atridies. Otherwise, this whole Easter egg thing will have gone way too far.

Dune is expected to hit theaters in December 2020.