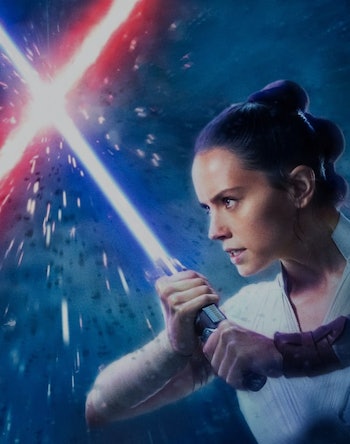 Nobody got exactly what they wanted with Star Wars: The Rise of Skywalker, but nobody can move on yet. That's partly due to the persistent spirit of an undead version of Episode IX: Colin Trevorrow's unfilmed script — Duel of the Fates — continues to surround us and bind us into a neverending game of wondering what could have been. Now, supposed concept art from Duel of the Fates has leaked, and even the most stalwart defender of The Rise of Skywalker will be given pause. So what are we looking at here, and would this have really been better than what we got?

As predicted by Duel of the Fates leaker Robert Meyer Burnett, what appears to be actual concept art from Trevorrow's Episode IX, has hit Imgur and Reddit. So is this art legit? Well, some of the names on the various paintings are folks who could have done concept art for Lucasfilm.

For example, an image of Rey wearing a black tunic while clutching a double-bladed lightsaber seems to have been signed by Kev Jenkins, someone who 100 percent works for Industrial Light and Magic. What's more, it seems to be consistent with previous concept art for contemporary Star Wars movies.

9. Rey with Return of the Jedi vibes

In Duel of the Fates, Rey would have had integrated the broken Skywalker lightsaber into her own staff, and made an amazing double-bladed saber. It's shocking this idea wasn't carried over intoThe Rise of Skywalker. Sure, we got Rey's double-bladed red saber in the Dark Rey vision, but there's no question that this version would have been better. Plus, her Luke Skywalker sartorial choices are spot-on.

One of the weirder aspects of Duel of the Fates is Kylo Ren's new, secret Sith Master who wasn't Palpatine. Of all the ideas in Trevorrow's unused script, this one seems like most half-baked. What's more, there's no way this character could have carried Episode IX the same way Palpatine did.

The final installment of the Skywalker saga didn't revisit what was once the capital of the entire galaxy. In the Trevorrow script, there's references to the First Order having built a citadel on top of the existing cityscape of Coruscant. The leaked concept art seems to confirm this, and it looks awesome.

6. Chancellor Hux throws in the towel

Was it kind of cool that General Hux was a spy who helped out the good guys in The Rise of Skywalker? Maybe.

In the end, General Hux wasn't much of a character, but in Duel of the Fates, Hux would have declared himself the political ruler of the entire galaxy. This is actually pretty scary, and his eventual end was even more interesting. Once Hux realizes the Resistance is going to retake Coruscant, he kills himself with a lightsaber. Family-friendly? Nope! Dramatic and interesting? You bet.

In Duel of the Fates, Kylo Ren goes to Mustafar to find a Sith Holocron, which burns him after recognizing he's not Darth Vader. This means that Kylo has to get himself a new helmet and mask made of Mandalorian armor. This alternate Kylo armor is decidedly more Vader-like, but is that a good thing?

Of all the stuff in Trevorrow's script, the Kylo Ren arc feels the most misguided. Fans claiming Ben Solo deserved better in The Rise of Skywalker would have been furious with Duel of the Fates. In this version, he's just another Darth Vader, but way worse because he doesn't really get any redemption.

In Duel of the Fates, Kylo Ren would have faced Darth Vader in a sequence that mirrors Luke fighting a visage of Vader on Dagobah in The Empire Strikes Back. Would this have been cool? While it was kind of a crime we never got to see Ghost Vader in the entire sequel trilogy, there's something about this that feels too derivative.

In Duel of the Fates, Force ghosts would have been even rowdier than in The Last Jedi! At one point, the ghost of Luke, Obi-Wan, and Yoda join Rey in a battle, which isn't that different than the Jedi voices imbuing her with strength in The Rise of Skywalker. This is a subtle rebooting of an older, unused concept from Return of the Jedi, where Obi-Wan Kenobi came back to assist Luke in his battle against the Emperor.

One of the biggest issues with The Rise of Skywalker is that it never explained how the Resistance rallied so many ships for the final battle. In Duel of the Fates, the final battle on Coruscant would have incorporated a bunch of former Stormtroopers. This would have resulted in repurposed AT-ST walkers being used by the good guys. Rise of Skywalker also included First Order folks defecting but it seems like Duel of the Fates may have handled it better.

The most heartbreaking of all the leaked artwork is an image of Leia, kneeling next to BB-8, perfectly recreating the iconic moment she put the Death Star plans inside R2-D2. The fact that it looks like she's on Coruscant while she's doing it brings in the prequel aesthetic, which echoes her birth mother, Padmé Amidala. There's a visible date on this art, too: 6.16, which seems like June 2016. This is about six months before Carrie Fisher passed away, so it seems like there's no way a scene like this could have ever existed.

It's nice to think Duel of the Fates would have been better than Rise of Skywalker. It might even be true. But, both films would have struggled with the Leia conundrum. Fisher was irreplaceable, and although Leia's journey was fantastic in The Rise of Skywalker, a scene like this was simply not fated to happen, despite how beautiful it looks.