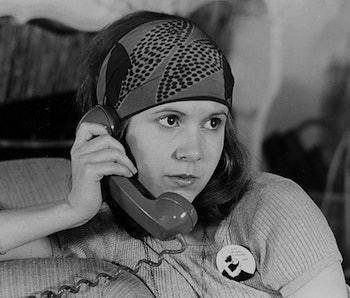 She was an icon on the screen and off, and now she’s gone. Carrie Fisher died Tuesday at the far-too-young age of 60, four days after suffering a heart attack on December 23 — or as she wanted it reported: “she drowned in moonlight, strangled by her own bra.”

As her family, friends, and fans remember her for the inspiring and culturally-defining role as Princess Leia, we can remember Fisher as more than just the princess. She was a shoot-from-the-hip author, a playwright, a humorist, and an unapologetic advocate of mental health. Sure, she was Princess Leia to most of the galaxy, but in real life her diverse personality created a legacy far beyond the Force.

Just as there are multiple sides to Carrie Fisher, there are two sides to Leia in the original Star Wars: the posh Leia who speaks with an affected English accent mentioning Governor Tarkin’s “foul stench.” And then, there’s the assertive, down-and-dirty Leia, snarling at Han Solo’s botched rescue and saying, “Somebody’s got to save our skins.” The duplicity of who Carrie Fisher was forced to be and who she really was couldn’t be clearer.

“I never wanted to be in show business,” Fisher writes in her latest memoir, The Princess Diarist, and yet, she ended up with a role in Warren Beatty’s film Shampoo, two years before she shot Star Wars. How did it happen? “I didn’t see it as a career choice,” she writes. “Or perhaps I was kidding myself. Lord knows it wouldn’t be the last time in my life I would do that. Kidding yourself doesn’t require that you have a sense of humor.” The daughter of two Hollywood legends — Debbie Reynolds and Eddie Fisher — Carrie saw the brutality of living in the public eye and maintained an uneasy relationship with fame throughout her life. In her memoir and one-woman show Wishful Drinking, Fisher described her antipathy toward her fame and the Hollywood rat race like this: “Resentment is like drinking poison and waiting for the other person to die.”

But like the defiant heroine she played in Star Wars, Carrie Fisher endured and conquered her personal demons. She spoke and wrote publicly about her struggles and triumphs with drug addiction, alcoholism, and bipolar disorder. Meaning, Carrie Fisher emerged as something bigger than a fantasy princess, she became publicly, a deeply flawed human being who didn’t try to hide from her struggles or sweep her problems under the carpet. She faced her demons bravely, and often, with an acerbic joke. “Well, I am hoping to get a centerfold in Psychology Today,” she told WebMD in 2008, but added, “But I define it [bipolar disorder], rather than it defining me.”

But her talents as a writer were sometimes invisible. Though she is of course publicly acknowledged for authoring both the novel and film versions of Postcards from the Edge, as well as four other novels, Carrie Fisher also had a wildly successful and influential career as a Hollywood script doctor: a secret kind of writer brought in to save troubles screenplays. Some of her more notable uncredited rewrites included the films Hook, Lethal Weapon 3, Sister Act 2 as well as the maligned Star Wars prequels. Her talents at punching up dialogue to salvage scripts led to her getting the reputation as “one of the most sought after [script] doctors in town.”

Her acting career may not have been as long or as varied as Harrison Ford or Mark Hamill’s, but in every film you find Carrie Fisher in, you’ve often found that film’s hidden gem. From her debut in Shampoo, to her gun-toting turn in The Blues Brothers and quiet comedy in Hannah and Her Sisters, Fisher’s onscreen performances always created real people, no matter how outlandish the cinematic circumstances.

In 2015, when the press tour for The Force Awakens ramped up, it was clear from very early on that tepid or polite media personalities would not be able to contain Carrie Fisher. She swore in interviews. She brought her dog Gary with her every time. She talked about whether or not Han Solo could get it up. In short, she demonstrated what being a celebrity and being in show business is really like: messy and paradoxically funny if you have any sense of humor. Fisher often said that she liked being the “only girl in an all male fantasy” of Star Wars, but instead of simply leaving it at that, she confronted the rest of the culture with that fantasy, too.

In writing her various memoirs, she reminded the world over and over again that there was a real person beneath Leia. And in a culture in which photographs and self-branding seem to be more and more rampant, Carrie Fisher’s sly mocking of youth’s elusiveness was refreshing. “I sit there in front of all these different pictures of myself from a million years ago,” she writes in The Princess Diarist, “and attempt to make looking at images from other eras somehow interesting to me.”

In the original Star Wars, Han Solo brags, “Sometimes I amaze even myself.” Princess Leia quips back, “That doesn’t sound too hard.” Carrie Fisher was Leia. But she was also a voice and a personality that bit back at the norm and fought what was expected. Whether in writing or art or in life, Carrie Fisher was, first and always, a rebel.