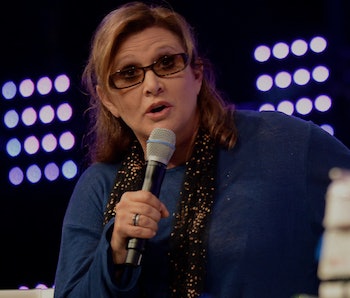 Actress Carrie Fisher may be best remembered for playing the headstrong Princess Leia in the Star Wars franchise, leading the Jedi rebellion against the Dark Force and her Sith Lord of a father, Darth Vader.

But in reality, Carrie Fisher fought other dark demons. Anointed Hollywood royalty as the daughter of 1950s pop star Eddie Fisher and actress Debbie Reynolds, Fisher had an unusual childhood. Her father left her mother for Elizabeth Taylor, which she later called “an unpleasant experience.” Reynolds eventually remarried, but her new husband scammed his way through the actress’s life savings. Fisher grew up to be a shy young woman who found refuge on stage, debuting in Shampoo in 1975, giving up graduating from college to act in George Lucas’s otherworldly space flick, Star Wars, in 1977.

Fisher had the Hollywood name and laurels to rest easy behind her fame, but she chose not to, instead openly discussing her mental health struggles, poignantly and darkly poking fun at her depressive bouts and the addictions that came with her attempt to mollify her bipolar disorder. First was partying, then handfuls of Percodan that spiked to about 30 a day instead of the once daily she was prescribed to keep her stable. That abuse made her seek the progressively dangerous highs in an attempt to come to some sense of normal. Fisher famously tried everything, from cocaine to club drugs to alcohol to marijuana to other over-the-counter drugs. By the time she was 28, Fisher had had her stomach pumped, was a regular at hospitals, and had tried every conceivable combination of drugs and alcohol in a desperate attempt to achieve some sense of normalcy.

In other words, there was never a more perfect spokesperson for mental health illness than Carrie Fisher. At various times in her life, she was forced into the hospital by friends and family; at other times, she was self-destructive, sometimes kept away from her own daughter. Fisher’s first and primary platform was autobiographical writing; it wasn’t meant to be an escape so much as a cathartic, crudely honest exposition of how mental illness affects people. Postcards From the Edge was an unrelenting glimpse into her Star War years and a drug-fueled existence that attempted to deal with mental illness; Wishful Drinking was a one-woman play that contextualized Fisher’s formative film years; 2016’s Princess Diarist chronicled how Leia came to embody Fisher, and vice versa.

What made Fisher stand out was not only her willingness to write about her struggles with mental health and addiction but to openly talk about it. In a time when mental health problems like bipolar disorder were kept hush-hush, when depression was just brushed aside as sadness, when drowning yourself in alcohol was seen as a shameful admission of failure, Fisher was brash and outspoken about the fact that yes, she faced mental health problems, and no, that did not make her an abject failure. As if to counteract whispers of her kookiness and spiral downwards, Fisher worked to become even more productive, rarely relegating herself to side bits and becoming one of the most respected actresses and “script-doctors” of her generation, even outside of the fandom that Princess Leia commanded.

That doesn’t mean that Fisher’s journey was easy, nor was being a public figure something that worked to her benefit. She was ridiculed for her visions that serial killer Andrew Cunanan was chasing her. She once went to a tattoo parlor in Los Angeles, convinced she had been ordered to do so under Vatican edict (Fisher was half Jewish and half Protestant). She described her manic moods as Roy (the extrovert) and Pam (the introvert).

But go public, she did. In November 2001, Fisher was the subject of a center spread in Psychology Today which cold opens with her asking “How manic am I?” in the midst of planting her garden, then cuts to a scene of her going through her myriad of pills to combat bipolar disorder. The piece transformed Fisher from living Star Wars relic to a mental health advocate. In 2002, she was given an award for “Erasing the Stigma” of mental illness. “You can lead a normal life, whatever that is,” she said. In 2007, she was a pivotal part of the Emmy Award-winning documentary Stephen Fry: The Secret Life of the Manic Depressive. In 2013, she told People that mental health was a constant struggle, that there was never any solid sense of relief from it. “It’s not a neat illness,” she admitted. “It doesn’t go away. I’m just lucky this hasn’t happened more. [In the future] I don’t know if there are setbacks or steps forward. I’m not embarrassed.”

Today, it’s considered brave for actresses to step out and discuss their struggles with mental illness — from Selena Gomez’s break from social media for lupus to Lady Gaga’s open letter about her PTSD from rape to Demi Lovato’s eating disorders and bipolar disorder. But what set the stage for these celebrities — and many more — to be honest with themselves and their audiences was the blunt woman who defiantly questioned society’s need to shove these stories under a rug, who instead courageously confronted the dark forces that affected her mental health throughout her life and thrived. As Fisher told ABC just last year: “I am mentally ill. I can say that. I am not ashamed of that. I survived that, I’m still surviving it, but bring it on. Better me than you.”