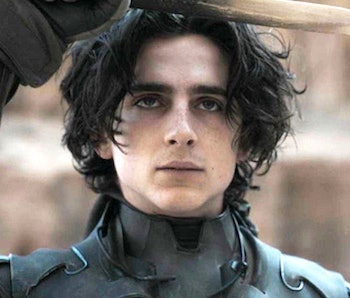 This article about the film Dune was originally published on July 6, 2019 and updated on November 13, 2021 following the movie’s release. Read on for the original article, with some new changes to reflect the latest updates on this topic.

The spice extends life... the spice is vital to space travel... it’s time to spice up your life with a brand new cinematic version of the most famous – and infamous — science-fiction epic of all time, Frank Herbert’s Dune. On October 1, 2021, director Denis Villeneuve brought Dune to the big screen. Though, thanks to the pandemic, this Dune also hit HBO Max streaming at the same time. Here’s everything to know about Dune 2021.

How many Dune movies are there?

Depending on how you look at it, this is either the second or the fourth attempt to make Frank Herbert’s six-book sci-fi saga into some kind of cinematic experience. David Lynch’s 1984 film is perhaps the most famous, but you’ve also got two connected miniseries for the Sci-Fi Channel, Dune (2000) and Children of Dune (2003.) And of course, there was the unproduced but still legendary 1975 Dune, which was — for a variety of reasons — never actually completed by Alejandro Jodorowsky.

Villeneuve’s adaptation of Dune sticks closely to Herbert’s novels as it tells the story of noble (and not so noble) families warring for control of the planet Arrakis. But he has repeatedly said that Dune is actually two movies, though he has yet to film the recently-confirmed sequel.

When did Dune release?

The first of two Dune films were slated for release on December 18, 2020. However, according to Collider, after concerns about movie theater safety, and delays of other Warner Bros 2020 films (specifically Wonder Woman 1984), Dune was eventually delayed until October 22, 2021. This means the film came out nearly a full year later than expected. Dune is also one of several Warner Bros films that debuted directly to streaming on HBO Max on the same day it hit theaters.

Is there a trailer for Dune?

You bet. And it’s amazing. Watch it right here. Notably, this trailer uses a version of the Pink Floyd song “Eclipse.” This is a sideways reference to the unmade Jodorowsky version of Dune. (Jodorowsky intended to use Pink Floyd to do the music for the 1975 Dune.)

Denis Villeneuve is directing both Dunes. Like 2016’s Arrival, starring Amy Adams and Jeremy Renner, Dune will mark the third time Villeneuve has adapted a literary work for the film, previously adapting Ted Chiang’s short story “Story of Your Life” into Arrival and Jose Saramago’s Enemy into a movie of the same name starring Jake Gyllenhaal.

Villeneuve is no stranger to putting distinct auteur touches on his films. This includes working with cinematographers like Roger Deakins on Blade Runner 2049 to imbue a movie with a distinct visual look and feel, making the viewing experience all the more arresting, or commissioning a score, as he did on Arrival, that is as much a character as the actual characters.

What’s the plot of Dune?

Dune tells the story of Paul Atreides, a young noble from the planet Caladan whose family is just one of several big “houses” clashing over the control of the planet Arrakis, better known as “Dune.” Arrakis is a unique planet because it’s the only place to get a drug called “spice melange.” Spice is a catchall sci-fi plot device. It lets you see the future, travel across space, and even extends life.

Paul’s inheritance includes the planet of Arrakis, which brings him into conflict with the planet’s former rulers, House Harkonnen. It’s also believed Paul is the Kwisatz Haderach, a messianic character who will unite — and kind of destroy — the universe. Paul soon discovers his duties and loyalties are not what he thought they once were as he is thrust into conflict over the future of Arrakis.

The real question is: Who isn’t in the cast of Dune?

From July 2018 to February 2019, it felt like there was new Dune casting news every week. Timothée Chalamet was the first actor to be cast back in 2018. This is a film that has racked up a seriously talented and diverse cast, packed to the rafters with interesting actors.

What do I need to read or watch before seeing Dune?

If you’re feeling ambitious, dive into Herbert’s books! There are six novels in the Herbert-penned Dune series to keep you busy. There’s also the Dune Encyclopedia and several spinoffs, sequel, and prequel novels written by Kevin J. Anderson and Brian Herbert. (Fans and scholars have debated the canonicity of those books for years, so your spice mileage may vary.)

If you want more, check out Lynch’s adaptation of Dune as a way of familiarizing yourself with the characters and the relationships while getting a uniquely Lynchian perspective on this sci-fi world. It’s a weird movie but certainly worth your time.

That said, because the new Dune will be reintroducing the entire Herbert spacescape anew, there’s the argument that you don’t need to read or watch anything before you see it. You could just sit back and let the spice flow.

That said, we do have a handy reading guide here, which gives you three different options for jumping into the world of the Dune books.

What did critics have to say about Dune?

Dune has an 82% rating on Rotten Tomatoes and a score of 74 on Metacritic. While some called the film “boring” and chastised it for only covering one half of the novel, the overall consensus was general praise towards its writing and sense of scale.

Will there a Dune sequel?

Yes! Villeneuve conceptualized Dune as the first of two parts, even putting a “Part 1” in the film’s opening shot. Only a week after the release of the first film, Warner Bros. announced Dune: Part 2. It will be released on October 20, 2023, with filming set to begin in July 2022.

Is there a Dune TV series spinoff?

In June 2019, a TV spinoff titled Dune: The Sisterhood was announced, which would be overseen by Villeneuve and focused on the mysterious Bene Gesserit. In July, Herbert’s son, Brian Herbert, tweeted he signed a new Dune franchise contract which could put yet another spinoff TV series into pre-production in addition to the in-development video game and tabletop game based on the series.

That said, since then, showrunner Jon Spaihts has reportedly stepped down from this hypothetical Dune series, and according to The Hollywood Reporter (in 2019), he would be focusing on the sequel to Dune.

That said, all of those developments were reported pre-pandemic. It seems possible, even probable, that some sort of direct-to-streaming Dune spinoff TV series could resurface. Just like sandworms, there’s always another concept for a Dune story, lurking just below the ground, ready to jump up and surprise us.

This article was originally published on July 6, 2019