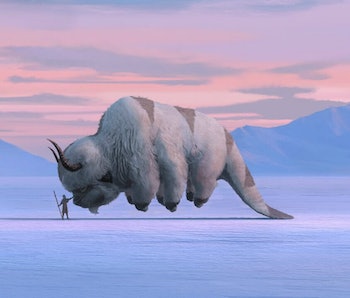 Avatar: The Last Airbender has never been more popular. After experiencing an Avatar revival in 2020 after both the original animated series and the sequel show Legend of Korra returned to Netflix. It was the good news fans needed after M. Night Shyamalan's universally despised 2010 live-action movie set the entire franchise back for a full decade.

Shyamalan's film was supposed to kick off a trilogy, but it got such bad reviews Paramount and Nickelodeon killed the entire project. However, that hasn't stopped one other studio from attempting to do the same thing and bring Avatar: The Last Airbender to live-action once again. Enter: Netflix.

In 2018, Netflix revealed a live-action Avatar series with original creators Michael Dante DiMartino and Bryan Konietzko returning as showrunners. But two years later, Konietzko and DiMartino revealed that they had left production, claiming that Netflix didn't "follow-through" on its promise to support the duo's vision for the show.

Another six-months later and the future of Netflix's live-action The Last Airbender is as mysterious as ever — especially now that Konietzko and DiMartino are back at Nickelodeon and helming a new Avatar Studios. But that doesn't mean Netflix is backing down. So here's everything we know about the upcoming live-action Avatar: The Last Airbender, from release date details to plot and cast speculation.

When is the live-action Avatar: The Last Airbender's release date on Netflix?

Three years after it was announced, the live-action remake of Avatar: The Last Airbender doesn’t yet have a scheduled release date. Per TheWrap, production on the series was due to start in 2019. However, the show is still in the pre-production stages of development and has not moved forward as far as we know.

As of May 2019, Bryan Konietzko updated fans, explaining that he and his team had moved into the next phase of production, but that things were moving slow.

“We’re writing, planning, and testing. Though there’s plenty that’s new for us in this live action process, we’ve been on this long rollercoaster ride twice before and a lot of the climbs and twists and turns feel familiar. Right now, everything seems slow, and we’re itching to speed up; before we know it, everything will be moving too fast and happening all at once.”

In hindsight, the slow progress on the live-action series may have been because of what was going on behind-the-scenes with the creators and Netflix.

As of January, ProductionWeekly reports The Last Airbender is expected to begin production this year. However, it’s likely the current health crisis and Hollywood-wide production shutdowns have delayed the series once more.

In August, Polygon announced that Albert Kim (Sleepy Hollow, Nikita) would be the showrunner for the series. Other executive producers will include Dan Lin (The Lego Movie), Lindsey Liberatore (CW’s Walker), and Michael Goi (Swamp Thing).

Who's in the cast of the live-action Avatar: The Last Airbender on Netflix?

The creators previously stated that they were committed to casting actors who are ethnically and culturally appropriate. This was a departure from the Shyamalan movie, which cast white actors in the "good guy" roles and Indian actors as the evil Fire Nation.

Here’s what Michael Dante DiMartino said in a statement (via Variety) at the time:

“We can’t wait to realize Aang’s world as cinematically as we always imagined it to be, and with a culturally appropriate, non-whitewashed cast. It’s a once-in-a-lifetime chance to build upon everyone’s great work on the original animated series and go even deeper into the characters, story, action, and world-building. Netflix is wholly dedicated to manifesting our vision for this retelling, and we’re incredibly grateful to be partnering with them.”

Polygon revealed in August the cast for the main four roles in the series. Aang will be played by Gordon Corimer (The Stand). Kiawentiio (Anne with an E) and Ian Ousley (13 Reasons Why) will play Katara and Sokka, respectively. And they’ll be facing down with this version of Prince Zuko, played by PEN15’s Dallas Liu.

What age will the main characters be in Netflix's live-action Avatar remake?

According to that same Illuminerdi report, Netflix plans to change things significantly here. From the article:

In the animated Avatar: The Last Airbender Sokka is Katara’s older brother. Sokka is 15 and Katara is 14. It looks like the live-action reimaging is changing this up with Katara now the older sibling at age 16 and Sokka her younger brother at age 14. Aang will still be 12. (Well, technically about 112.)

The big change is that Katara is now the older sibling, which shouldn't change their dynamic much since she was also the more mature one. However, the larger gap in age between Katara and Aang does raise some questions about the romantic ending the two share in the original series. Of course, this might all be hearsay, but it's still interesting to consider.

What is the plot of Netflix's live-action Avatar remake?

Presumably, the live-action series will follow the same basic storyline as its animated predecessor, though some slight changes seem likely.

Avatar: The Last Airbender is set in a fictional world, but borrows aspects from East Asian and South Asian cultures, among a few others. The plot centers on Aang's journey as the Avatar, the only person with the ability to bend all of the four elements (water, earth, fire, air). After the Fire Nation attacks and takes control of the other three nations — the Earth Kingdom, Water Tribe, and Air Nomads — Aang and his friends, Katara, Sokka, and Toph work together to defeat the Fire Nation once and for all.

We have to assume the basic broad-strokes will stay the same, but perhaps Netflix will ditch some of the more childish oo episodic stories while emphasizing the most memorable moments like Ba Sing Sei and the attack against the Fire Nation.

Is there a trailer for Netflix’s Avatar live-action remake?

No, not yet. Fans shouldn't expect to get a trailer for the series until it's months into production, at the earliest. At best, that might mean spring of 2021, though even that seems optimistic.

How many seasons will The Last Airbender live-action have?

The animated series had a total of three seasons, so it’s possible the live-action show will have the same number. But that's just our best guess.

Where can I watch Avatar: The Last Airbender right now?

You can watch all three seasons of the animated series on Netflix right now along with Legend of Korra. And, if you’re feeling fancy and want to relive the live-action movie (for some reason), M. Night Shyamalan’s film is also available to stream on Netflix.

It has yet to be announced when the live-action Avatar: The Last Airbender series will premiere on Netflix.