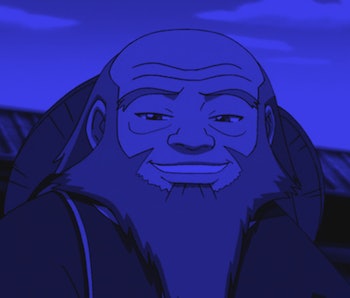 Avatar: The Last Airbender is enjoying a nice resurgence now that it's on Netflix, but the series would be nothing without Uncle Iroh’s moral lessons and patience. Fans of the popular Nickelodeon show know Iroh loved nothing more than tea — he even opened up his own shop in Season 2 — however, a recently spotted Easter egg reveals how Iroh specifically used tea to drive home a point about elemental harmony that's key to the entire story of Avatar: The Last Airbender.

As Avatar's primary villain turned good guy, Prince Zuko spent a lot of time battling with who he ultimately wanted to be and who his family believed he should be. His turn toward harmony was largely influenced by his Uncle Iroh’s willingness to pass on hard-earned knowledge and wisdom. While Iroh’s love of tea on The Last Airbender was often played for laughs, there was an underlying meaning and purpose behind his penchant for jasmine and ginseng tea.

Reddit user pat_speed surmised that Iroh’s tea drinking was a lesson in and of itself. They point out that in order to make a phenomenal spot of tea, all four of the bending elements (earth, fire, wind, and water) are required. Failure to include any one of these elements and the tea becomes far less pleasing to drink. Iroh knew this, just as he knew that the only way to defeat the Fire Nation was for all four elements to work together.

An example of this unknowing lesson occurred in Avatar: The Last Airbender Season 2 when Iroh bought a cup of cold tea that desperately needed heating, thereby revealing that he and Zuko were firebenders.

Iroh didn’t love any just old tea — only a well-balanced cup of tea brought him joy and peace.

Iroh learned several things by watching other bending tribes. He knew that understanding others was the only way to be whole. Tea, as it were, is a physical manifestation of these teachings.

On the surface, Iroh’s love of tea could be misconstrued as nothing more than a simple character trait, but it also serves as a representation of his spirituality and calming nature. In the context of achieving harmony and balance among the four nations, it's a lesson on the value of tolerance and listening that Uncle Iroh passed on to Zuko. And while this theory is never confirmed within the show, it's a deep and meaningful way to look at Iroh's love of tea in a new light.