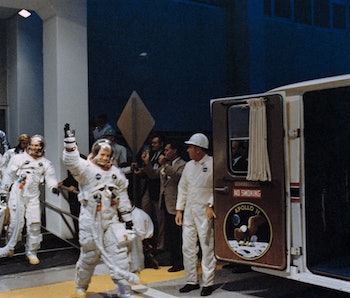 This article about Season 1 of the series For All Mankind was originally published on June 3, 2019 and updated on May 16, 2021 following the release of the season on Apple TV+. Read on for the original article, with some new changes to reflect the latest updates on this topic.

Ronald D. Moore, the creator of the acclaimed Battlestar Galactica reboot series and the epic romance series Outlander on Starz, has brought us a new science-fiction drama exclusively for Apple TV+. Titled For All Mankind, the show is an alternate take on the Space Race of the mid-20th century. Here’s what we know about For All Mankind Season 1.

What was Ronald D. Moore working on for Apple TV+?

Ronald D. Moore, along with Matt Wolpert and Ben Nedivi, created a new series titled For All Mankind.

Described by Deadline as a “space drama,” the series explores a reality in which the mid-century space race “had never ended.”

What Do You Mean by “Never Ended”?

In the 20th century, the United States and Russia competed in the “Space Race,” a global competition to achieve dominance in spaceflight. Spinning off the arms race for nuclear weaponry in the aftermath of World War II, achieving breakthroughs in the Space Race would assure citizens of either nation not just the sophistication of national security but in ideological superiority.

In other words, the Space Race was a billion-dollar status symbol, one that would signify which country was more prepared for the future. The United States effectively “won” the Space Race on July 20, 1969, when NASA successfully landed the first men on Earth’s Moon.

The legacy of the Space Race endures in the form of sophisticated consumer technologies, ranging from laptop computers, satellites, video game joysticks, freeze-drying, and virtual reality, to non-consumer tech such as water purification systems, solar cells, landmine removals, and food safety procedures adopted by the U.S. Food and Drug Administration.

But as the series asks: What if the race to space had never ended? Based on how much our real, everyday life made quantum leaps thanks to the breakthroughs made during the Space Race, For All Mankind might depict life with far more advanced technology than we currently have.

When was the For All Mankind Season 1 release date?

Is there a trailer for For All Mankind Season 1?

Yes! The first official trailer for For All Mankind was unveiled at the Apple Worldwide Developer’s Conference (WWDC19, for short) on June 3, 2019. The trailer, which you can watch below, gave the world a look at the alternate history at the heart of this new series where we imagine what would have happened if the Soviet Union had landed on the moon before the United States did back in the late 1960s. The trailer gave us a better look at series lead Joel Kinnaman’s role as astronaut Edward Baldwin and teased how the show would do the Space Race differently, including storylines like the Americans trying to beat the Soviets to Mars and a group of women training to become astronauts, too.

Previously, Apple released a brief montage clip showing scenes from various original shows coming to Apple TV+ in early 2019. You can watch that teaser footage below.

Who is in the cast of For All Mankind?

The initial cast for For All Mankind included:

In August 2018, The Hollywood Reporter revealed some details regarding who these characters are. THR said Kinnaman and VanSanten star as “a prominent NASA couple,” while Schmidt’s Margo is “a NASA engineer.”

How many episodes are in For All Mankind Season 1?

Season 1 was comprised of 10 episodes.

Was For All Mankind renewed for Season 2?

Yes! Apple renewed the drama for a second season before the first even premiered back in October 2019. The 10-episode Season 2 premiered in February 2021. The series has also been renewed for Season 3.

For All Mankind Seasons 1 & 2 are currently streaming on Apple TV+.