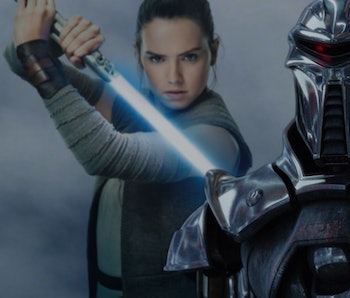 Whenever someone makes a tonally dark science fiction movie or TV show these days, and that person has good taste, they will invariably cite the 2003-2008 reboot version of Battlestar Galactica. But, did anyone expect Rian Johnson to say the latest Star Wars film was inspired by Battlestar? Well, he has, and now it seems like the Last Jedi director might be the final Cylon.

On Wednesday, Rolling Stone published a feature-length story about the making of The Last Jedi. In addition to news that Daisy Ridley’s plans not to return as Rey after Episode IX, the article also contained this interesting tidbit about Johnson’s inspiration in crafting The Last Jedi.

Though he does admit some influence from the morally ambiguous 2000s reboot of Battlestar Galactica.

Rolling Stone’s Brian Hiatt mentions this is “funny” because of George Lucas’s 1978 lawsuit in which the Star Wars creator attempted to prove that the original Battlestar was a rip-off of his creation. But, what’s even more interesting is the fact that the co-creator of the reboot Battlestar Galactica — Ronald D. Moore — was hired by George Lucas around 2011 to write several scripts for the unrealized TV series Star Wars: Underworld. In May, Moore spoke to Inverse about the experience and said “[George Lucas] was very complimentary of the show,” meaning the Star Wars guru had become a fan of Battlestar Galactica.

So now, what inspiration has Rian Johnson taken from Battlestar specifically? Beyond its complex world-building, the cornerstone of that series was easily the way it inverted emotional expectations about who the audience should root for. At the start of the series, the robot revolution of the Cylons over humanity made the good guys and bad guys pretty clear. But, as the show went on, that wasn’t true anymore. Who can forget when the heroic, former school teacher, President Roslin started being cool with throwing dudes out of airlocks?

In most ways, Star Wars hasn’t ever overtly attempted moral grey areas like this. We can’t imagine Leia or Poe torturing First Order troops for information. People in Star Wars generally switch from being good to being evil and vice versa. But, the Battlestar influence could change that.

If the most shocking thing in The Last Jedi is Leia throwing a political prisoner out of an airlock, then the film will easily succeed at being the most transgressive Star Wars ever.

The Last Jedi is out everywhere on December 15.