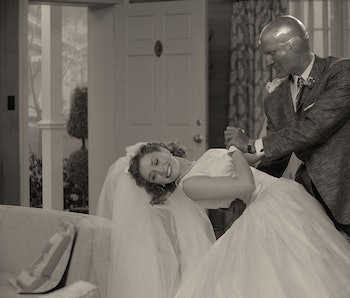 The Emmy nominations rarely offer any surprises. The TV frontrunners are obvious from the start. For a while, that translated into “Prestige TV” shows like Breaking Bad or Game of Thrones getting their due. But Walter White is done cooking, and winter is over.

The Emmys are now anyone’s game, and sci-fi TV is finally getting its fair shot at the big awards. Here’s what that means for the future of your favorite shows.

Genre TV in the Emmys Race

In the recent past, the start and finish of genre television in the major Emmy conversations was Game of Thrones and The Handmaid’s Tale. Both were technically genre, but they were the most “highbrow” of sub-categories: epic high fantasy and gritty dystopian drama. There were some outliers like Stranger Things or Westworld, but those were more flukes than a turn in the awards tide.

However, in the age of streaming, the sheer quantity of genre-heavy television shows accessible to viewers — and more importantly, Academy voters — has increased exponentially. Everyone’s horizons are being widened, and the very definition of what we call TV is getting uprooted. Remember Black Mirror’s 2019 Best Television Movie Emmy win for Bandersnatch? An interactive show like that would never be an option for an award without the innovative work Netflix had done to redefine what television meant.

The Mandalorian sweeps the Emmys

The 2021 Emmys were really anyone’s game. After a strange year in 2020 and the 2019 send-off of the iconoclastic Game of Thrones, there was no real frontrunner. At the end of the day, the tied winners for most nominated shows were Netflix’s royal dynastic saga, The Crown, and Disney Plus’ Star Wars series The Mandalorian. Both received 24 nominations, and both are at either end of the spectrum of nominated shows. The Crown exists as a star-studded opulent dramatization of history, and The Mandalorian is an old-fashioned space western complete with a guest cast of character actors.

Although The Mandalorian appeared to clean up, one major actor was left in the Tattooine dust — Pedro Pascal didn’t receive an acting nomination. At the same time, Carl Weathers, Timothy Olyphant, and Giancarlo Esposito all got nods. Still, there was much to celebrate, including Amazon’s The Boys getting a Best Drama Series nomination, one of the fiercest combinations in the pack.

Part of why The Mandalorian and other genre shows were able to rack up so many nominations was because of the sheer scale involved. Shows like these usually involve some truly monumental production work, making them ripe for nominations in lesser-known categories like casting, stunt coordination, prosthetic makeup, and sci-fi costuming. They may not be televised like the Best Drama Series award, but a nomination is a nomination.

The Emmys’ biggest surprise was that WandaVision, the first foray Disney+ made into Marvel Cinematic Universe television, received 23 nominations. In a way, it was a perfect storm of circumstances that made it poised to become a breakout hit.

First, there’s nothing an awards jury loves more than something dedicated to their own medium. Just like how the Oscars loved Once Upon a Time in Hollywood and The Artist because they were about making movies, the Emmys adore a love letter to television. WandaVision provided viewers with a whistle-stop tour through TV history from The Dick Van Dyke Show to Modern Family, all classic Best Comedy Series darlings.

Then, there’s the sheer range involved in WandaVision that allowed it to collect down-ballot nominations easily. Because of its unique form, WandaVision was nominated for Period Hairstyling, Period Makeup Design, and Sci-Fi Costumes. The Production Design nomination was a shoo-in thanks to the constantly morphing set, and there was even a nomination for the series’ multiple title sequences.

Finally, beyond the nitty-gritty of how the Emmys work, WandaVision is just a good show. The performances by Elizabeth Olsen, Paul Bettany, Kathryn Hahn, and Evan Peters all deserved recognition, and the writing was both excellent and varied enough to warrant three separate writing nominations for three different episodes.

Hopefully, this is the first sign of a bigger change in how the Emmys treat genre television. It’s not a novelty that can be conformed to “Prestige TV” standards. Sci-fi and fantasy shows can be fun, take risks, pay homage to their roots, and still play among the big boys come awards season.

We’ll just have to see who wins when the Emmy Awards airs on September 19.