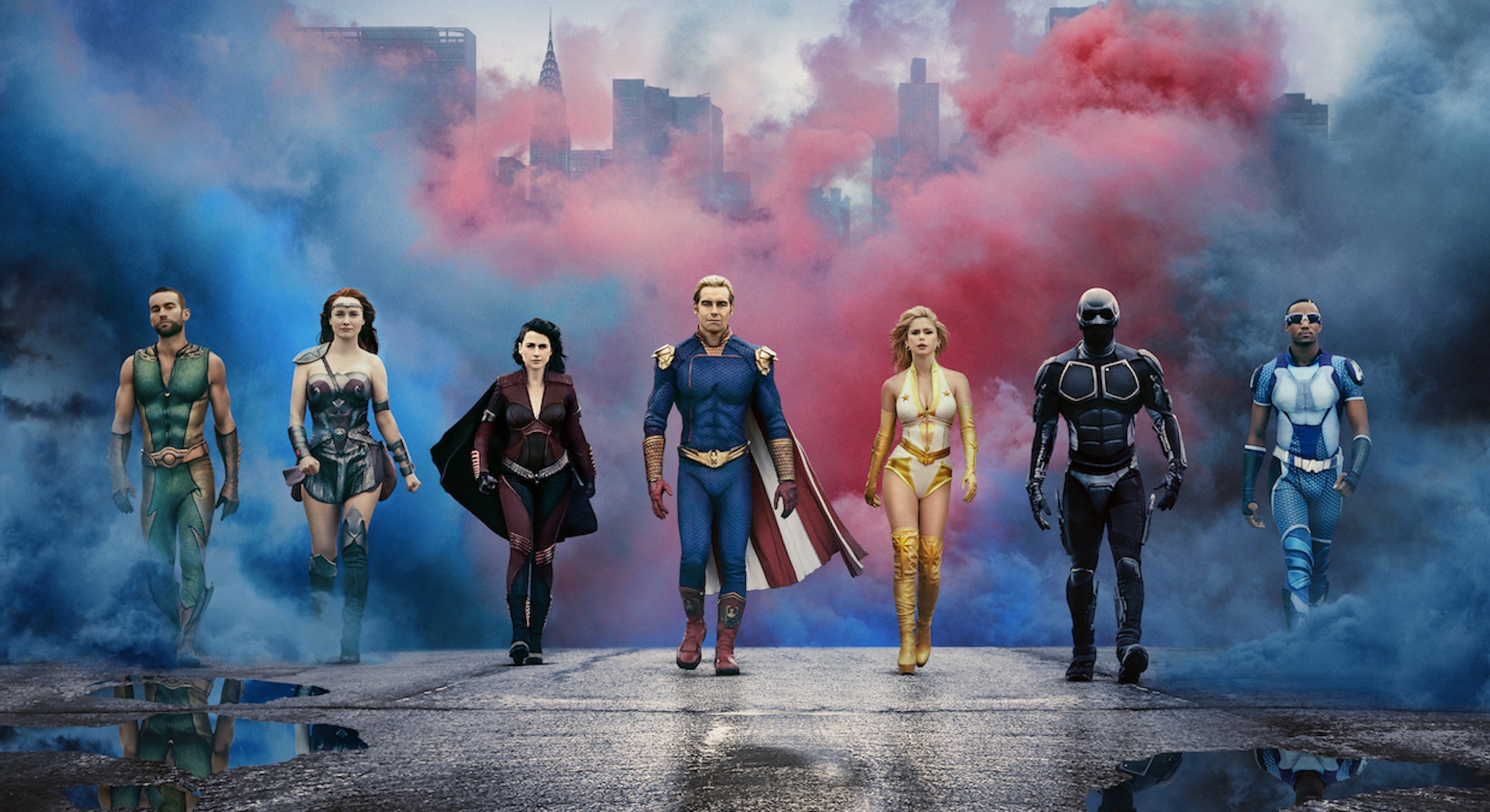 Midway through The Boys Season 2, a group of good guys drives through the American South on a secret mission to stop the show’s deplorable superheroes.

As they cruise through the countryside, the camera lingers for a moment on a lone barn against the empty landscape. Painted on its wooden exterior is Homelander, the show’s twisted approximation of Captain America and Superman, his trademark American flag cape replaced with the symbol of Confederacy.

It’s a blink-and-you'll-miss-it moment, one of many tiny details that makes The Boys feel more real than any other superhero show or movie. It’s also a perfect reminder of what the Amazon series became in Season 1, and how it raises the bar for the entire genre yet again in Season 2.

In 2019, The Boys felt dangerous, in a good way. It was exciting and new. A welcome change from the family-friendly superheroes we were used to. A little over a year later, the rest of the supe-media-complex has caught up — from Joker to Umbrella Academy — but in Season 2, The Boys leaves everyone else to choke on its dust yet again.

The Boys Season 2 is everything you loved about Season 1: gross, violent, disturbing, hilarious, and action-packed. Its exploration of what superheroes would actually be like if they existed in our own world continues unabated (short answer: they really, really suck), but on top of that, Season 2 uses its story of corrupt superheroes to weave a metaphor for American politics and the dangerous romance between mainstream conservatism and far-fight white supremacy that’s playing out every day on the news and social media.

In Season 1, The Boys introduced a team of corrupt superheroes (The Seven) and the evil conglomerate that owned them (Vought Industries). We also met the Boys, a group of misfits led by Billy Butcher (Karl Urban) who recruit Huey (Jack Quaid) to take down the supes after his girlfriend is killed by one of them — a steroid-addicted speedster called A-Train. By the end of the season, we’d learned that Vought not only used its superheroes to bully politicians; it also secretly created all of them with a fictional drug called Compound V and then sent that drug abroad to create supervillains (or “supe-terrorists”) as leverage to give Vought even more power.

Season 2 sees these secrets spill out into the open while adding new ones to what feels like a never-ending list of superhero sins. After losing the invisible supe Translucent (Remember? The Boys stuck a bomb up his butt and exploded him in Season 1), the Seven welcomes a new member: Stormfront.

Warning! Light spoilers for The Boys Season 2 beyond this point.

Played by Aya Cash, Stormfront is a new type of superhero. She’s politically savvy and casually racist, rallying the public with an anti-immigrant message cloaked in supe-terrorist warnings. Supervillains could be pouring across our southern border, she tells a crowd of angry followers.

Stormfront (and The Boys) understands how politics work in 2020. She floods the internet with crude memes. When your uncle posts this on Facebook, you’ll know it’s working, she tells Homelander, adding: You don’t need 50 million fans; you need to make 5 million people angry.

Homelander and Stormfront start as enemies, vying for control of a fractured Seven, but as they unite over a shared desire for power, The Boys’ not-so-subtle message becomes clear: Centrist conservatives (represented by Homelander) no longer know how to connect with the public. By making a dangerous alliance with white supremacists (Stormfront), they may hope to maintain control, but there’s only one way this story can end.

Homelander and Stormfront’s story is the most interesting thing about this season, but The Boys is still bursting with creativity. Huey’s obsession with Billy Joel is a fun distraction that blossoms into a part of his romantic relationship with Starlight (Erin Moriarty). Elsewhere, the Deep (Chase Crawford) gets swept up in a Scientology-inspired cult that’s obsessed with Fresca and determined to place one of its members in the Seven. And after being introduced at the end of Season 1 as Vought’s nefarious CEO, Giancarlo Esposito immediately elevates every scene he’s in with a cold intensity few other actors can muster.

Antony Starr's portrayal of Homelander is downright legendary, from his ability to change emotions in a split-second to the otherwordly convulsions his jaw is apparently capable of. I've never been so repulsed by such a vanilla-looking character before. If Homelander was scary in The Boys Season 1, you'll pity him in Season 2. And 10 years from now, I'd wager we'll talk about Homelander in the same way we speak of Darth Vader or the Joker. Timeless villains that will never stop being interesting.

The action is exciting, too. There are new superheroes and villains and an epic set piece in the final episode. Stormfront is particularly thrilling to watch in action, emanating purple lightning bolts that can knock enemies across the room, explode a vehicle from across a field, or propel her into the air.

But at the end of the day, The Boys is less about the action and more about what happens in between. If you ever wondered what Iron Man would actually do after having one too many drinks or what hanging out with Han Solo at the cantina was really like, The Boys has the answers. It’s not pretty, but even after two brutal seasons, we still can’t look away.