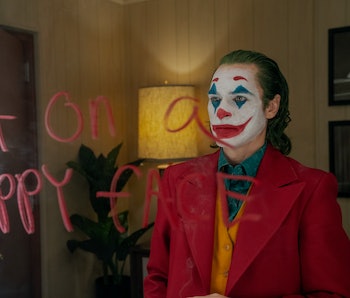 Todd Phillips’ Joker is like the Joker himself: Evil and violent without meaning, and profoundly uncomfortable. I already anticipate the Facebook hate comments now being typed — Well, that’s the point, they’ll read — but even inescapable touchstones like Heath Ledger and The Killing Joke had the Joker stand for something. Here, in the climax when Arthur Fleck has fully morphed into Joker, he’s asked what he stands for. “I don’t believe anything,” he says. For once, the Joker ain’t kidding.

In theaters Friday, Joker is a stand-alone origin of Batman’s nemesis. Under the white make-up is Arthur Fleck (Joaquin Phoenix), a wannabe comedian making minimum wage as a clown who cares for a sick mother (Frances Conroy) and harbors a crush (Zazie Beetz) down the hall. At home, Arthur and his mother take shelter from the cold world of Gotham City by the warm glow of the TV, where Arthur projects a father figure in talk show host Murray Franklin (Robert De Niro, in an echo to Scorsese’s The King of Comedy).

That’s all Arthur wants: Comfort amidst cruelty, not fame, fortune, or even his face on the one hundred dollar bill. But due to a disorder that causes him screeching laughter at inappropriate moments, Arthur is eternally pitted against short-tempered Gothamites. Finally, one bad night in the subway where Arthur stands between three Wall Street bros and a lone woman they’re harassing spirals into a murder spree that ignites a class war and sees Arthur devolve into the Joker.

"One the most discomforting movies of 2019.

Take for example the “viral” emergence of the Joker. Arthur’s crimes become inexplicably appropriated by Gotham City’s working class, though what Gotham’s poor are rioting against is unclear. A half-baked garbage strike happens in a vacuum, but systemic prejudice? Police brutality? Nah. Gotham’s problems are just like, the system, man.

On paper, Joker could be the most transgressive movie of the 21st century as it bucks comic book canon entirely; no acid vats, crowbars, or Red Hood gangs here. But in execution, it’s artistic cosplay, obsessed with nailing the details but failing to embody the spirit. Masquerading as a DC movie, Joker eschews the bombast of superheroes in favor of a world of textured realism in slavish homage to Martin Scorsese. The master director’s influence is most evident in Phillips’ vision of Gotham, which is not a gothic metropolis guarded by gargoyles but a reincarnation of late-‘70s New York, when grimy peep shows lined 42nd Street. Joker is an amoral world in an amoral time, and Batman, the only one capable of decency and justice, exists as a shy little boy.

Phoenix’s Joker is the sole highlight. Looking like an incomplete clone of Andy Kaufman, his emaciated body and weird face make him a genuine freak show. It’s the transition, once Arthur begins to really become the Joker with no turning back, that is the most enthralling. He is at once playful and sinister, Cesar Romero and Heath Ledger and Mark Hamill all in a single body. (Oddly, it’s when he’s fully the Joker that he’s less fun.) It’s admirable work that will give Phoenix momentum at the Oscars. Unfortunately, the rest of the cast only come and go, a bummer when we’re talking the likes of Beetz, De Niro, Shea Whigam, Brian Tyree Henry, and even Marc Maron (barely a cameo) in the same breath.

Phillips, who previously directed The Hangover trilogy — three big studio comedies that punched down without empathy and soul — wants Joker to be a golden ticket to auteurism. But his ambition betrays him. Joker is too confident in its premise and the A-minus effort of its chameleonic lead to actually place stock in the most necessary ingredient of Scorsese: humanity.

Yes, even Scorsese’s toughest films, Goodfellas, Taxi Driver, Raging Bull, Casino, Gangs of New York, have moments of sensitivity that allowed the director to reorient his morally gray characters. Joker is all black chaos and cruelty with no traces of tenderness.

It is clear, especially after Phillips’ bizarre interviews leading up to Joker’s release, in which he’s railed against “woke culture”, that he sees his film as necessarily disruptive; a mid-budget character study in the middle of New York Comic-Con. But Joker’s emptiness proves Phillips is clueless towards the cultural climate and the state of superhero media, which is already rich in subversive ideas. Yeah Joker is brilliant, if you’re also not aware of Logan (2017), Deadpool (2016), Deadpool 2 (2018), The Tick (2016), The Boys (2019), Watchmen (2019), Watchmen (2009), Thor: Ragnarok (2017), Kick-Ass (2010), Doom Patrol (2019), and like, the entire Bronze Age.

There are good things in Joker. It has some left-field moments of genuinely funny slapstick humor, and its impeccable visual design is an Instagrammer’s dream. But all of that beauty still tells a weightless story of a pathetic, unstable man pushed to murder because everyone is mean to him when he’s not worth any empathy on his own. He’s not a bad guy, but as a creepy stalker, he’s no saint either.

So, why make Joker? What do we get out of seeing a semi-decent (?) man turn bad with nothing to learn from it? Answer me. I got nothing.

The speculative discourse that’s preceded Joker has proven to be more interesting, and a more worthwhile inkblot test, than the movie itself. There’s nothing in Joker that gestures explicitly towards incel behavior, white nationalism, or anything else critics have been rightfully wary over. It’s just violent without consequence and cruel without reason. The cruelty is the point, perhaps, when it comes to the Joker. Yet, the fact authorities have been made aware of this movie due to the very real possibility of violence is deeper soil to dig into than anything Joker actually offers. In that way, maybe we’re all clowns.

Joker is in theaters Friday.