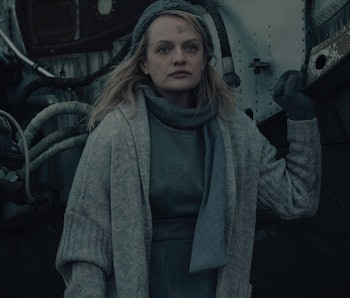 This article about Season 3 of the drama The Handmaid’s Tale was originally published on March 20, 2019 and updated on May 3, 2021 following the release of the season on Hulu. Read on for the original article, with some new changes to reflect the latest updates on this topic.

Read on to find out everything we know about Season 3, including its plot, new characters, and more.

What happened at the end of The Handmaid’s Tale Season 2?

In Season 2, June gives birth, and she has the chance to escape Gilead with her baby girl, but she chooses to stay behind.

Instead, in the Season 2 finale, Emily stabs Aunt Lydia in the neck and pushes her down the stairs. Commander Lawrence, who had already lied to Aunt Lydia about The Ceremony going as planned, further helps Emily by getting her out of Gilead and saving her life.

Emily is the one to leave Gilead, taking June’s baby with her. June puts her daughter in Emily’s arms and watches her leave. Instead of going with them, she stays behind to save her other daughter, Hannah.

When was Handmaid’s Tale renewed for Season 3?

Hulu renewed the series for a third season just one week after the Season 2 premiere was released.

When was the Handmaid’s Tale Season 3 release date?

Hulu announced in February 2019 that Season 3 would premiere on Wednesday, June 5, with the first three episodes. The rest of the 13-episode season was released every Wednesday.

Is there a trailer for Handmaid’s Tale Season 3?

Yes! The first trailer aired on February 3, 2019, during the Super Bowl.

What was the plot of Handmaid’s Tale Season 3?

The 13-episode third season of The Handmaid’s Tale is driven by June’s resistance to the dystopian regime of Gilead and her struggle to strike back against overwhelming odds. Startling reunions, betrayals, and a journey to the terrifying heart of Gilead force all characters to take a stand, guided by one defiant prayer: “Blessed be the fight.”

But don’t expect to see Commander Waterford change, no matter what happens with the resistance. “The Commander ultimately won’t really change his colors, I think, if I’m really honest,” Fiennes continued.

There won’t be a major time jump, as executive producer Warren Littlefield told USA Today that Season 3 starts pretty much immediately after Season 2 ended. About 10 minutes later, to be precise.

We also know that there’s going to be a new location in Season 3: Washington, D.C., or at least, what it looks like in the world of The Handmaid’s Tale.

“There are bigger players,” Littlefield said. “It’s a little bit of Gilead on steroids.”

As fans caught in photos of filming in D.C., we’ll see June, Commander Waterford, Serena, and Emily there.

“It was a strange thing to be on the steps where Martin Luther King’s speech and to be at the memorial of Abe Lincoln” since they stand for “the most important values of America: freedom and democracy,” Joseph Fiennes told ET Online. “[It was] a bit ironic and spooky to be Fred Waterford on those steps, espousing everything but freedom.”

Meanwhile, June wants to get her daughter back in Season 3, and she’s ready to do whatever she has to to make that happen.

Could that explain the Martha look for June in that teaser above?

However, just because June sent her other daughter, Nicole, to safety doesn’t mean that she’ll be forgotten. Season 3 will see how Serena Joy reacts to Nicole being gone since, in Serena’s eyes, that’s her daughter.

“Nicole becomes a multinational [interest],” Littlefield told USA Today. “Everybody wants Nicole. And the question is who legally and morally presides over that.”

The executive producer also revealed that Season 3 would reveal Lydia’s backstory. Yes, she survived the attack in the Season 2 finale, but she’ll be a bit different. She was “transformed by this event,” Miller said at a screening of the Season 2 finale.

Which cast members of Handmaid’s Tale returned for Season 3?

All of the key cast members returned for The Handmaid's Tale Season 3. This includes:

Bradley Whitford appeared at the end of Season 2 as Commander Lawrence, who helped Emily. He became a series regular in Season 3, first reported by Deadline.

Commander Winslow is a “powerful and magnetic Commander who hosts the Waterfords on an important trip.” Reaser’s Mrs. Winslow is going to be Serena’s “friend and inspiration.”

Was Handmaid’s Tale renewed for Season 4?