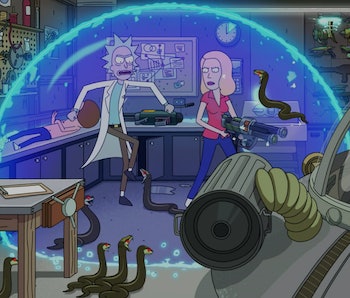 Whether or not Rick Sanchez wants to admit it, he has a strange obsession with snakes, and Rick and Morty Season 4 Episode 5 finally reveals why. “Rattlestar Ricklactica” aired Sunday night, capping the first half of Season 4 with a time-travel story that parodies the Terminator franchise but sets the entire thing on a planet full of sentient alien snakes that speak (and even sing) by hissing. Everything else about their society mirrors Earth. There was even a Snake Hitler.

At the start of the episode, Morty disobeys Rick and floats out into space where he’s bitten by the first snake astronaut. After he kills it, they discover the snake planet (and its “snake jazz”) and realize that the astronaut snake represented hope to the people. Feeling like he’s ruined an entire planet, Morty replaces it with a regular Earth snake crammed into a snake spacesuit.

That’s where this whole mess starts, with an entire two-minute sequence with no dialogue, just hissing. If Arrival were a Terminator prequel with nothing but snakes it would be this episode of Rick and Morty.

Snake Terminators from the future are sent back in time by Serpacorp to protect the timeline, and other cyborgs are sent back by the snake resistance to defend Morty. The episode then devolves into thousands of snakes, good and evil, coming back in time to kill Morty both on Snake Planet and Earth.

The only way for Rick to fix it is to go back in time and give the snake people time travel technology early enough attract the attention of the multidimensional police officers that regulate time travel. They’re the same “testicle monsters” featured in the Season 2 premiere. In other words, Morty causes a problem and Rick makes it so much worse that it forces omniscient alien beings to get involved.

“Rattlestar Ricklactica” may be the most snake-infested episode of Rick and Morty ever, but snakes have been featured a surprising number of times on the series.

The Season 2 premiere showed a snake getting its blood pressure taken in a veterinarian’s office using the kind of cuff that is used for humans. No character ever addressed the fact that you wouldn’t be able to read a snake’s blood pressure this way. Yet it’s another interesting connection between these two episodes.

“Pickle Rick” also references the viral sensation of cats being afraid of pickles, with Pickle Rick explaining that cats think long green objects are snakes. “Whoa, whoa, whoa, whoa! I know what it looks like to you, Izzy, but I’m not a snake!” he yells. “I’ve seen the YouTube videos, I know cats are scared of cucumbers and pickles because they think they’re snakes. I’m not a snake! I’m a pickle, I’m a pickle!”

Rick also let a monstrous creature called the Gibble Snake swallow Jerry in “The Whirly Dirly Conspiracy” just to attract a Shmooglite Runner. There was even “Snake in Party Hat” in Season 2’s “Total Rickall.”

By far the most noteworthy running bit when it comes to snakes, however, comes in the form of Rick’s particle beam wristwatch. Starting in the Season 2 episode “Get Schwifty,” Rick likes to tell people that it transforms people into snakes. Instead, it straight-up kills them. Later in the episode, it’s revealed that Rick just hides the snakes in a boot holster like a cheap magician.

When Rick goes inside his own microverse battery in “The Ricks Must Be Crazy,” he’s trapped inside the miniverse for months, so he builds a mecha out of wooden contraptions. Because he has to commit to the bit, he has a snake holster on the boot even there.

Now we understand why Rick called the snake boobytrap a “total waste of snakes” at the start of “One Crew Over The Crewcoo’s Morty.” He’d rather save them for his boot holster.

Rick and Morty will return sometime in 2020.

More like this
Entertainment
Jan. 25, 2023
Rick and Morty can survive without Justin Roiland
By Dais Johnston
Entertainment
23 hours ago
Talk to Me unleashes a gruesome ghost story on the TikTok generation
By Andy Crump
Entertainment
10 hours ago
Doom Patrol and Titans' cancellations mark the end of DC's best era of TV
By Eric Francisco
LEARN SOMETHING NEW EVERY DAY.
Related Tags
Share: