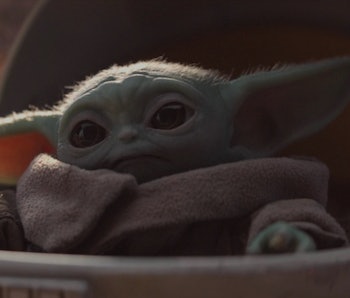 The Mandalorian was one of the biggest shows of 2019 — and the best reason to sign up for Disney+ at launch. Sure, we loved watching Pedro Pascal’s swaggering bounty hunter shoot stormtroopers on Tatooine, but it’s no secret that the only thing we really care about is Baby Yoda.

We’ve got plenty of theories about this 50-year-old green alien infant — and a few others about The Mandalorian and some of our other favorite shows of 2019 — but our favorite has got to be this one explaining an unexpected connection between Baby Yoda and the “Chosen One,” Anakin Skywalker.

Read more of Inverse’s 19 favorite fan theories of 2019. Oh, and spoilers ahead.

14. The Mandalorian teased a Life Day holiday special in its first episode

Just before The Mandalorian introduced the world to “Baby Yoda” in its premiere episode, the live-action Star Wars series on Disney+ hinted at some deep cut lore from the Star Wars universe: Life Day. The agnostic “Wookie Christmas,” introduced in the infamous 1978 Star Wars Holiday Special television disaster, got a shout out from Mythrol, a bounty target played by comedian Horatio Sanz just before getting frozen in carbonite.

Mythrol said he’d hoped to remain free for Life Day, which he vaguely mentioned was coming up. (Just as Christmas and New Year’s are coming up for us now.) But that wasn’t in Mythrol’s cards, because unfortunately, he was a bounty for the mysterious “Mandalorian.”

But wait a second: Did this mean The Mandalorian would have the second ever Christmas (“Life Day”) episode of a Star Wars show? This theory, which we proposed, was short-lived as The Mandalorian never again mentioned Life Day throughout its acclaimed first season.

13. Baby Yoda and Anakin Skywalker might have a shocking connection

They could have made Baby Yoda any age, yet if he truly is precisely 50 years old, that means he was born 41 years before the Luke blew up the first Death Star — the same year as Anakin Skywalker. That has to mean something, right? It’s a little-known, and disputed, fact that Palpatine artificially impregnated Shmi Skywalker using the Force (ew!), and that’s how Anakin was born without a father. Could that establish a firm connection between Palpatine and Baby Yoda?

The wildest theories about this connection posit that Baby Yoda is the anti-Anakin, created by the Force to counterbalance the artificial creation of Anakin. We still have no idea how Baby Yoda’s species procreates, so if they’re born in such a way, it would explain why they’re so scarce. The mystery behind this green youngling remains, and it won’t be until The Mandalorian Season 2 (or even later) that we learn the truth.

12. Billy was the monster in Stranger Things Season 3

When the Stranger Things Season 3 trailer first debuted in March 2019, everyone immediately drew a connection between the mysterious bite on Billy’s arm and the grotesque new monster cobbled together from the fleshy parts of organic creatures. Billy getting bitten and mutating into this monstrosity felt like a strong possibility, even more so by June of that year when Eleven actress Millie Bobby Brown teased that something was “spreading fast” and a poster implied a connection between Billy and the new monster.

The final trailer confirmed that Billy became possessed, but it wasn’t until the third season actually aired that the true dynamic was revealed: Billy was controlled by the Mind Flayer and forced to recruit humans whose bodies were exploded into pulp that was used to form that nasty Cronenberg body.

Watchmen was one of the most mysterious shows of 2019, but no mystery was greater than whatever the heck was happening to Adrian Veidt. Before the show premiered, HBO wouldn’t even confirm that Jeremy Irons was playing Veidt (aka, Ozymandias), instead referring to his character as the “Lord of the Manor,” but it quickly became clear who he was after Veidt donned the classic purple and yellow costume.

From there, one fan correctly guessed that Veidt’s timeline was separate from the rest of the show, with a year passing between each appearance (the candles on his purple and yellow cakes gave it away.) Closer to the finale, I speculated that Veidt might actually be Lady Trieu’s father and that he was actually already back on Earth and entombed in that statue of himself in Trieu’s vivarium. I was right on both counts, though if I’m being honest, it was just a lucky guess (with an assist from Twitter user @LobotomyKing)

10. The wife was the killer on True Detective Season 3

True Detective will likely never be as great again as it was in Season 1, but Season 3 wasn’t half bad. The mystery was compelling enough, but Oscar-winner Mahershela Ali’s phenomenal performance as Wayne Hays, a detective struggling to solve a terrifying missing child case at three different times in his life, was what made the show truly great.

In the end, True Detective offered a pretty straightforward answer to the mystery of the missing Purcell kids, but before then, I was pretty convinced that Wayne’s wife Amelia was the murderer. Not only were some of the details around her story pretty mysterious, but she arguably gained the most after writing a best-selling true crime book based on the case.

In the end, I was wrong, and even though the real killer made way more sense, I still think Amelia have made for a more shocking — if slightly less satisfying — ending to True Detective Season 3.