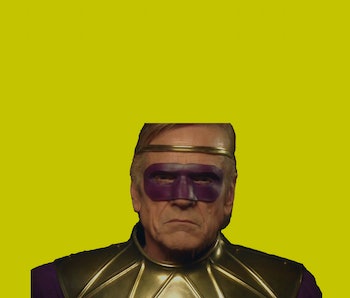 Last Sunday on Watchmen we learned that Doctor Manhattan had been hiding out on Earth all along, but could the same be true for Adrian Veidt? It might sound ridiculous — especially since Veidt is seemingly stuck on one of Jupiter’s moons — but if you take a closer look at the various timelines at play in HBO’s Watchmen this theory actually makes a lot of sense.

Warning: Speculative spoilers for Watchmen ahead.

So if Adrian Veidt is on Earth, then where is he?

The theory: He’s encased within that “statue” of Ozymandias in Lady Trieu’s vivarium.

Wait! Before you cancel your HBO subscription in disgust, hear me out. Remember in Episode 4 when Lady Trieu hastily bought that property just seconds before some sort of meteor crashed on it? What if that meteor was actually Adrian Veidt after he escaped the manor and encased himself in some sort of protective material to survive the trip through space?

After I speculated that Lady Trieu could be Ozymandias’ daughter, Twitter user @LobotomyKing messaged me to take the theory one step further. Not only is Veidt her dad, but that’s why she bought the property.

So when Trieu told Angela that her dad would be there for her big moment she wasn’t technically lying. Adrian Veidt is physically there already, but he’s not conscious. Yet.

As for the timing, it actually makes a lot of sense. In Watchmen, we learn that Veidt was last seen in 2007, and showrunner Damon Lindelof confirmed that one year passes in between each episode’s installment of his story. We don’t know what year that story began so it’s possible he could already be back on Earth during the events of the HBO show.

As for Lady Trieu, an in-universe article on HBO’s Watchmen website dated October 2018 revealed that she had recently broken ground on her Millenium clock (it also speculates that Trieu is actually the Comedian’s daughter!). Then, when Trieu shows up in Episode 4, we learn she arrived in Tulsa about a year earlier, which means the meteor scene takes place during the show’s present timeline in 2019 — one year after that article was published.

If that’s the case, and the meteor really was Adrian Veidt, that means Lady Trieu only found him a few days before we see the statue in her vivarium. She’s likely still trying to figure out exactly how to wake him up, but as Trieu herself might say, it’s only a matter of time.

More like this
Entertainment
Jan. 30, 2023
The Last of Us Episode 3 Features One Subtle Video Game Easter Egg
By Alex Welch
Culture
Jan. 31, 2023
Lost Jumped the Shark by Breaking Its Most Important Rule
By Jake Kleinman
Entertainment
9 hours ago
The DC Universe is Taking the HBO Approach With Its TV Shows
By Dais Johnston
LEARN SOMETHING NEW EVERY DAY.
Share: