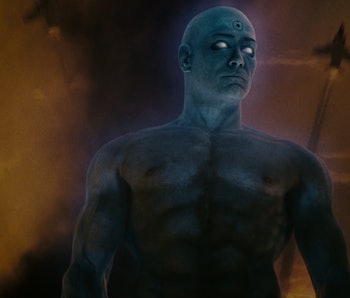 Watchmen dropped a bombshell on Sunday night, revealing that not only is Doctor Manhattan still on Earth (and not on Mars), but he’s masquerading as one of the show’s main characters. Episode 7 of the HBO sequel series ended with a bang almost no one saw coming, but the repercussions of this reveal could be even bigger than we thought — and that’s no accident.

In an interview, Watchmen executive producer Nicole Kassell tells Inverse that the show’s “radical” reveal was carefully thought out from early on.

“It’s absolutely conscious,” she says. “I don’t think there’s any detail in the show that’s not conscious.”

Kassell also directed Episode 8 of HBO’s Watchmen, and we’ll share the full interview after that episode airs next week. But before that, let’s dive into Episode 7’s big reveal and what it really means.

To paraphrase the original comics: “The superman exists… and he’s Black.”

Watchmen Episode 7 reveals that Doctor Manhattan isn’t on Mars, but living on Earth, right there in Tulsa, Oklahoma. Angela’s husband, Cal Abar (played by Yahya Abdul-Mateen II) is actually Manhattan in a new form with his memories erased. “If it’s any consolation, it was your idea,” says a distraught Angela to a confused Cal. When Cal tells her “you’re not yourself,” Angela corrects him. “No, Jon. You’re not yourself.”

As the episode helpfully recapped in the beginning, Doctor Manhattan was born Jon Osterman, a watchmaker’s son turned atomic scientist who became a glowing blue superhuman after getting trapped in a chamber during an experiment. He became a polarizing figure when he was used by the United States in Vietnam, single-handedly ending the war and allowing the U.S. to colonize the country into statehood.

When Angela uses a hammer to kill her “husband,” she digs into his skull and extracts from Cal/Jon the atomic symbol of Manhattan.

Just last week, Watchmen radically “rewrote” Hooded Justice to be Will Reeves, a Black man in disguise as a white vigilante. HBO’s Watchmen does it again, this time with Doctor Manhattan in the body of a Black man. To Kassell, it’s a decision the show’s writers made, knowing well how powerful that change would be.

“Having Doctor Manhattan take on an African-American form is as radical as telling a story in which Hooded Justice was African American,” Kassell says. “It’s absolutely conscious. I don’t think there’s any detail in the show that’s not conscious and especially when it comes to race, having really thought through deeply, and him being in that body.”

Kassell tells Inverse that reimagining this alternate history’s white superheroes as Black people underscores the show’s thesis on the intertwined relationship between race and mythology.

“I think having Doctor Manhattan take on an African American form is as radical as telling a story in which Hooded Justice was African-American,” she says.

On the topic of Hooded Justice and the decision to make the anonymous superhero a Black man, Kassell admits the team was bracing for a negative response from the internet, but came away surprised.

“Were we worried?” she says. “Yes, and it’s been really extraordinary to see the response, and the depth of thought that it’s provoked has been very exhilarating.”

The response to Doctor Manhattan’s big reveal has been equally positive so far, and fans can likely expect Watchmen to pull at those same threads even more in Episode 8, titled “A God Walks into Abar.” Until then, you can rest assured that making the most powerful being on Earth a Black man isn’t just some stunt, it’s yet another example of the methodical way Damon Lindelof and co. have taken apart their source material brick by brick to build something just as impressive, relevant, and “radical” as the original structure.

Watch the trailer for Episode 8, “A God Walks into Abar” now: