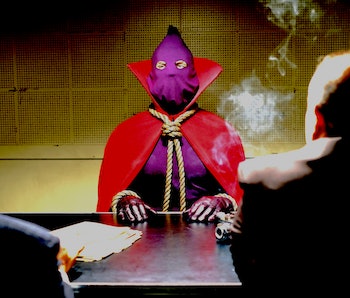 Each new episode of Watchmen draws us deeper into the mystery of HBO’s series, and Episode 6, “This Extraordinary Being,” is no exception. The latest episode, told mostly in stylized flashbacks, reveals a shocking truth about Hooded Justice and his connection to the conspiracy playing out in Watchmen’s alternate 2019.

Who’s good? Who’s evil? And is there really any difference? Watchmen Episode 6 might just have the answers. Let’s dive in.

After Angela Abar (Sister Night) swallowed all of her grandfather’s Nostalgia pills at the end of last week’s Watchmen, she spends Episode 6 reliving his past. In the process, she learns that Will Reeves is actually Hooded Justice, the original superhero that inspired characters like Nite Owl, Silk Spectre, the Comedian, and Rorschach.

After surviving the Tusla Race Massacre as a child, Reeves grew up to become a New York City police officer. There, he encountered racist cops who threatened to murder him for looking into a conspiracy known as “Cyclops,” a secret organization of KKK members and cops who conspired to use mind-control technology implanted in film projectors to make Black Americans kill each other.

After those cops hung Reeves from a tree before cutting him down, he donned the noose and hood as his costume and became Hooded Justice. He even applied white-face makeup around his eyes so no one would realize Hooded Justice was Black.

(Sidenote: This is a pretty bold departure from the Hooded Justice character in the original comics, who’s identity has never been revealed, though some characters speculated he could be an East German circus strongman named Rolf Müller. HBO’s Watchmen essentially retcons the character, giving the superhero and his costume a much more powerful origin story.)

Eventually, Reeves joins the Minutemen, but the group is uninterested in investigating Cyclops so he solves the case on his own, tracking the group to a meat storehouse where he murders all of them and burns the building down. However, it seems Reeves saved at least some of that Cyclops tech because, in a final flashback, we see an elderly Reeves in 2019 use some sort of flashlight to mind control Chief Judd Crawford and make him hang himself.

During that scene, Reeves mentions Judd’s secret KKK robe as the reason he has to die, but we have a feeling it goes deeper than that. Could Judd, Senator Keene, and the Seventh Cavalry be plotting a conspiracy as terrible as Cyclops? They’re definitely up to something, and Watchmen Episode 6 draws a straight line between the original conspiracy that created Hooded Justice and this new one that brought the character back out of hiding.

Then again, Will Reeves is working with Lady Trieu, but are we convinced she’s on the side of justice? She’s clearly planning something, likely connected to the Millennium Clock. Trieu also seems to be channeling Adrian Veidt, who wasn’t exactly a good guy even if his ultimate goals were arguably noble.

It’s possible that whatever Trieu is planning could be just as devastating as Veidt’s original scheme (aka, the giant psychic squid that killed millions), but we’re willing to bet that whatever Judd, Keene, and the Seventh Cavalry were planning is even worse.

Considering Reeves’ history, we’re willing to give Hooded Justice the benefit of the doubt, but don’t be surprised if the conspiracy on HBO’s Watchmen is even bigger than Adrian Veidt’s master plan and Cyclops combined.

Watchmen airs Sundays at 9 on HBO.

More like this
Entertainment
13 hours ago
Behind the scenes at “Herogasm,” The Boys’ most NSFW episode ever
By Aaron Pruner and Jake Kleinman
Entertainment
6.23.2022 4:42 PM
Obi-Wan Kenobi Easter egg gives the show’s best scene a deeper meaning
By Dais Johnston
Entertainment
6.17.2022 11:00 AM
15 years ago, Marvel revealed its most ambitious crossover ever
By Richard Newby
Share: