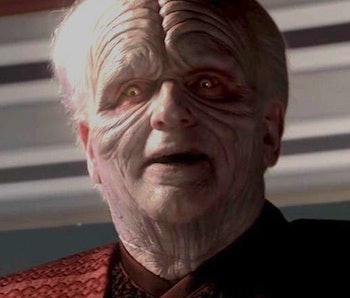 Everyone’s favorite wrinkly Sith Lord will return in Star Wars: The Rise of Skywalker, but if you’re expecting an explanation on how Emperor Sheev Palpatine cheated death back in Episode VI: Return of the Jedi you may be out of luck. Recent leaks, which seem to be extremely accurate, suggest Episode IX won’t explain how Sheev survived, but that doesn’t mean the broader Star Wars franchise can’t provide some closure in the near future.

Warning! Possible Star Wars spoilers ahead for The Rise of Skywalker and maybe even The Clone Wars Season 7.

There’s been plenty of speculation over how Palps survived (or came back to life) in Episode IX, but according to a massive leak from redditor u/JediPaxis, who moderates the Star Wars Leaks subreddit, we won’t really get an explanation in this movie.

However, that doesn’t mean one isn’t coming eventually. And, if you think about it, the main movies were never going to be the place where we got that information in the first place.

Aside from the prequels, Star Wars movies have always been more interested in telling new stories and expanding this universe than in explaining people’s backstories. Rian Johnson knew this better than anyone else when he killed Snoke and revealed that Rey’s parents were “nobody.”

Johnson wasn’t subverting Star Wars in The Last Jedi — at least not in those scenes. He was just doing what Star Wars does best: Telling new stories in the movies and leaving the thankless work of filling in backstories to the broader Star Wars canon made up of comics, books, and cartoon shows.

Under the guidance of George Lucas’ disciple, Dave Filoni, the cartoons have played a key role in expanding Star Wars lore beyond the bold paintbrushes of the movies. The Clones Wars is basically just a long Wookieepedia page brought to life with shoddy CGI animation, but if you’re curious how Force ghosts work, what’s up with that weird dagger in the Rise of Skywalker trailers, or what a Mandalorian even is, there’s a Clone Wars episode that has the answer.

Other Star Wars cartoons have also helped fill out the Star Wars Wiki in various ways. Perhaps, most notably, his animated series Rebels introduced the concept of time travel to the galaxy via the World Between Worlds, a sort of mystical plane that connects time and space via the Force and allowed the show’s protagonist, Ezra, to change the past.

In that episode, also titled “The World Between Worlds,” we learn that Emperor Palpatine is aware of the WBW too, though he’s unable to physically access it. This has led plenty of fans to theorize that Palps could have cheated death by entering the World Between Worlds at the end of Return of the Jedi only to emerge decades later during the current sequels trilogy.

Does any of this matter to more casual fans who will see The Rise of Skywalker in theaters? Probably not. Explaining a concept like the World Between Worlds on the big screen would be unnecessary and overly complicated, but that doesn’t mean it won’t happen somewhere else.

There’s plenty more Star Wars coming after Episode IX, including the highly anticipated return of The Clones Wars, which will air its seventh season on Disney+ in February 2020. Assuming that The Rise of Skywalker doesn’t explain how Palpatine survived, your best bet may be David Filoni’s CGI series — or one of the countless other shows, books, and comics that keeps Star Wars going long after the final movie in the Skywalker saga comes to an end.