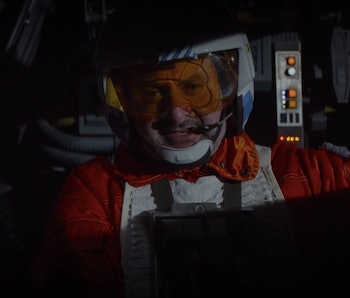 In Star Wars, you’ve got the “Old” Republic and the “New Republic. And, the truth is, in terms of on-screen canon, we’ve seen a ton of the former, and not much of the latter. Although The Mandalorian is set during the early days of the New Republic, we haven’t seen much in terms of legit representatives from that government. Until now!

Chapter 6 of The Mandalorian, “The Prisoner” gave us our first glimpse of New Republic troops and X-Wings. But, if you think these famous starships were the coolest Easter eggs; think again. This episode of The Mandalorian had an amazing guest cast, including blink-and-you’ll miss it cameos from three Star Wars directors and the one actor who has played Anakin Skywalker more than anyone.

Spoilers ahead for The Mandalorian “Chapter 6: The Prisoner.”

But, the most interesting guest stars were the folks you only saw for a second. You’ll be forgiven if you didn’t recognize the guy who played the poor New Republic guard on the prison ship, but if you like The Clone Wars, there’s a chance you should have recognized his voice. That’s Matt Lanter, better know as Anakin Skywalker on The Clone Wars. Yep, that’s right, cartoon Anakin just got his first live-action turn in Star Wars, and was killed right away. This pretty cool, if only because in the contest of Matt Lanter versus Hayden Christensen, Lanter easily wins because he has about 100 times more hours logged as Anakin than Christensen. So, yeah, real-canon Anakin just got killed randomly in The Mandalorian.

And, then, there are those three X-Wing pilots at the end of the episode. In a fictional move, all three of these pilots are played by people who have directed episodes of The Mandalorian. So, yes, that’s Dave Fioloni, Rick Famuyiwa (who directed and co-wrote this episode) and Deborah Chow (who is in charge of the Obi-Wan Kenobi show.)

So, yeah, apparently, Dave Fioloni’s Trapper Wolf, Rick Famuyiwa’s Jib Dodger, and Deborah Chow’s Sash Ketter are in the same squadron for the New Republic. What is the squadron called? Will we see them again? In terms of live-action, the answer is probably not, but you can bet that these pilots will show up in some kind of in-canon comic book or novel.

After all, somebody had the lay the foundation for Poe Dameron and his pilots, so it seems like folks are people who fought the brave fight, long before the First Order rose. Fingers crossed that these are not the last X-Wings we see in The Mandalorian.

There are two episodes of The Mandalorian left in 2019. Those will air on December 17 and December 27 on Dinsey+.