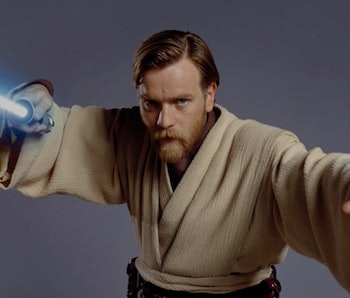 When exactly did Obi-Wan Kenobi start calling himself Old Ben? The upcoming Disney+ TV series starring Ewan McGregor as the venerable Jedi Master might not focus too much on Obi-Wan’s nickname, but at least now know when in the Star Wars timeline the series will take place. The confirmation could have several interesting crossover ramifications.

On Wednesday, in a very brief segment of the Star Wars Show on YouTube, Andi Gutierrez and Anthony Carboni recapped the news of the official Obi-Wan announcement from D23 and said, “The untitled series is set eight years after Revenge of the Sith.”

"The untitled series is set eight years after Revenge of the Sith.

Mostly, the canon of Star Wars is measured relative to the events of the original film, specifically the Battle of Yavin in A New Hope, so generally speaking, “years” in Star Wars are written either BBY (Before the Battle of Yavin) or ABY (After the Battle of Yavin.) The means that canon tells us that Revenge of the Sith is 19 BBY, since it happens 19 years before A New Hope and Rogue One, both of which are 0BBY, give or take a few months or weeks.

So, if the Obi-Wan series happens eight years after Revenge of the Sith, that puts it about 11BBY or 10BBY, depending on how much time passes during the series. (That last bit of speculation will be important in a second.)

Anyway, here are the takeaways of what it means that the Obi-Wan Disney+ series is eight years after Sith.

At this point, Luke Skywalker is about the same age Anakin was when he met Obi-Wan

In A New Hope, we know Luke Skywalker is roughly 19 years-old because Obi-Wan drops off a newborn Luke on Tatooine in Revenge of the Sith, which is 19BBY. So, in 11 or 10BBY, during the new Obi-Wan show, Luke will be 8 or 9 years old. Interestingly, this puts Luke about the same age his father — Anakin Skywalker — was when he met Obi-Wan Kenobi for the very first time in The Phantom Menace. It also almost certainly means that the Obi-Wan series will show us, little kid, Luke Skywalker. Why? Well, not only is there a canon precedent from the a 2016 Marvel Comic story, but we also know from A New Hope that Luke is familiar with Obi-Wan. He says “Boy, am I glad to see you,” when he sees Ben in A New Hope. So, duh, Luke has seen Obi-Wan once or twice before, possibly a lot, in fact.

If I was placing bets, I’d put a lot of money on little-kid Luke Skywalker in the Obi-Wan show.

Notably, the timeframe of 11BBY and 10BBY actually intersects with the events of Solo: A Star Wars Story. In 11BBY, Lando Calrissian is still the owner of the Millennium Falcon, and, according to a few lines of dialogue in Solo, he had some problems with the bounty hunter Aurra Sing around that time.

Could Lando and his droid partner, L3-37, have had tangoed with Aurra Sing on Tatooine in the year before Lando and Han team-up to pull-off the Kessel heist?

Other than Donald Glover and Phoebe Waller-Bridge’s doubtlessly busy schedules, there’s nothing in canon to prevent Lando from meeting Obi-Wan on Tatooine.

Obi-Wan could meet Han Solo, but there’s a catch or two

So if the majority of the series happens in 11 BBY, it makes it a little harder for Han Solo to appear in this series. Why? Well, recall that during the events of Solo, there’s a three-year gap in which Han Solo is working for the Empire. The main thrust of the movie — everything after Han breaks-out Chewie and teams-up with Beckett’s gang — happens in 10BBY. But 11BBY is, possibly, right in the middle of Han still working for the Empire.

Darth Maul could show up (but probably not)

Hardcore fans will point out that the Solo timeline also makes it possible that Crime-Boss Darth Maul is totally running around out there. (The ending of Solo established that Maul was running the crime organization Crimson Sun.) But, there’s just one problem. In Rebels, it really seems like Maul has been looking for Obi-Wan Kenobi for a long time, implying he was unable to find Obi-Wan Kenobi. It would be really weird if Darth Maul visited Obi-Wan on Tatooine six years before he’s supposed to in Star Wars Rebels.

Here’s how it breaks down: Maul is killed by Obi-Wan in 2BBY, in the Rebels episode “Twin Suns.” If the new series is happening in 11 or 10BBY, it probably won’t touch anything this close to Rebels or A New Hope. Meaning, Maul probably can’t meet Obi-Wan in the new show. Unless Obi-Wan Kenobi leaves Tatooine during the new series and encounters Darth Maul on a different planet, and then, scurries back to Tatooine before the end of the series.

This poses a bigger question: Will Obi-Wan Kenobi leave Tatooine at all during the course of the new TV series? In our heads, the answer is no, because we think he’s just hanging out in the desert, watching over Luke from afar. But, if that’s true, then what is the series going to be about? Just Obi-Wan hanging out? And, if so, then is this the first Star Wars joint ever without space travel?

The Obi-Wan Kenobi series starts filming next year. No exact release date has been set.