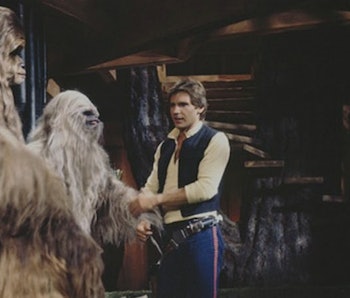 It’s almost Life Day in the world of The Mandalorian, which actually begs one important question: Are we in for another Christmas special from Star Wars?

Today is a big day for Disney with the launch of its original streaming service, Disney+, which comes with more than 50 years of pop culture history to watch on demand. Among its original offerings is the first episode of The Mandalorian, the first live-action Star Wars television series.

Set in the aftermath of Star Wars: Return of the Jedi, the Mandalorian stars Pedro Pascal (Game of Thrones) as a nameless bounty hunter who takes up a very high risk, high reward job in the outer rims of the galaxy. Out here, Luke Skywalker’s revolution that toppled the Empire hasn’t changed a thing.

But the specific time in the canonical Star Wars calendar could hint the show is about to have its own “holiday” episode, even if no one spreads good cheer.

Minor spoilers for The Mandalorian ahead.

Early in the first episode of The Mandalorian, one of the Mandalorian’s bounties talks about wanting to go home and visit family for “Life Day.” Unfortunately that doesn’t happen, because the poor soul is immediately frozen into carbonite inside the Mandalorian’s ship. Honestly, it’s kind of sad to watch.

Later, the Mandalorian is forced to learn how to ride a blurrg — think of a giant warthog, a dinosaur, and a horse all in one. For the Mandalorian, it’s impossible to reach his destination without riding a blurrg. When the Mando insists on a vehicle, his teacher argues: “You are a Mandalorian! Your ancestors rode the great Mythosaur. Surely you can ride this young foal.”

Mythosaur? Life Day? Those are two big Easter eggs to a notorious piece of Star Wars history: The Star Wars Holiday Special, which among other things introduced Boba Fett to audiences for the very first time.

A 90-minute oddity that aired on CBS a week before Thanksgiving 1978, the special introduced to canon “Life Day,” a fictional holiday celebrated by the Wookies on their home planet of Kashyyyk. (There is no actual Christmas because, remember, it’s a galaxy far, far away.) Despite featuring the actual principal cast of the films a whole two years before The Empire Strikes Back, the Star Wars Holiday Special is remembered as a legendary disaster that aired just once before surviving only through bootleg VHS copies and, eventually, the internet.

The plot of the special followed the Life Day celebrations of Chewbacca’s family, a flimsy excuse to string celebrity cameos (including Jefferson Starship, Bea Arthur, Diahann Caroll, and Harvey Korman, because it really was the ‘70s) and other random segments that had almost nothing to do with Star Wars.

One major part of the special is an animated, nine-minute short film that introduced Boba Fett. Voiced by Dan Francks, Boba Fett appears to save Luke Skywalker and C-3PO from a large alien dinosaur (while riding on another dinosaur himself). A “plot twist” reveals that Boba Fett is actually working for Darth Vader, which is how The Empire Strikes Back introduces Boba Fett as one of the bounty hunters hired by Vader to pursue Han Solo.

The Mandalorian seems to play up references to Holiday Special for fun, given its premise as a Boba Fett show without Boba Fett and its premiere date being so close to the anniversary of the special. (November 17, 1978.)

And if The Mandalorian really wanted to be daring, it would let its story extend to Life Day, which the Mandalorian’s bounty suggested is not so far off in the show’s timeline. It’s entirely possible that “Life Day” could happen during The Mandalorian. If nothing else, the show’s final episode (directed by Taika Waititi) airs December 27, which makes it as close to a “holiday” episode as you can get.

Part of The Mandalorian feels like its fulfilling a prophecy as ordered by George Lucas decades ago, back when Boba Fett was intended to be the new villain of the movies after Darth Vader.

In 2016, Inverse reported that Boba Fett’s inclusion in the holiday special was meant to set up Fett as a more important character based on George Lucas’ original plans for The Empire Strikes Back and Return of the Jedi.

“Originally Boba Fett was set up in Empire as a character, and the third movie’s plot was going to be more about Boba Fett rescuing Han Solo and all of that,” said Craig Miller, Lucasfilm’s first official fan relations officer, in a 2016 interview with Inverse. “Boba was gonna be the main villain.

Miller added, “That was set up, why he was taking Han Solo away, why there was a thing with him in the Christmas special. When George decided not to make a third trilogy, he completely jettisoned that storyline, which is why in the first ten minutes [of Return of the Jedi], Boba Fett gets bumped into and falls into the mouth of a giant monster.”

The Mandalorian is available now on Disney+. Its next episode will being streaming on November 15.